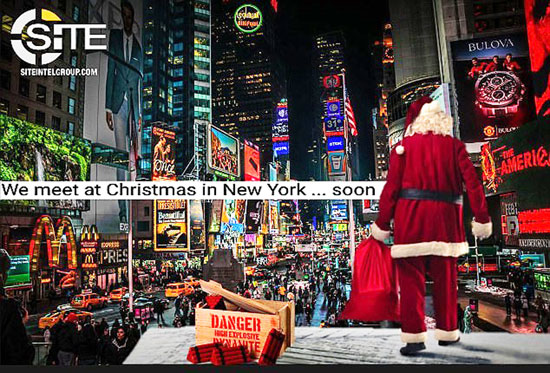 The graphic was captioned: “We meet at Christmas in New York… soon”, and has been disseminated on known jihadist channels and social media networks.
The image was part of a series of propaganda pieces and calls for attacks on key sites across the West during the Christmas holidays, including London, the Vatican, St. Peter’s Basilica in Rome, the Eiffel Tower in Paris, and Christmas markets across Europe.

These threats have been taken more seriously in the wake of 2016 horrific massacre at a Christmas market in Berlin, Germany, where an Islamic terrorist drove a large truck through crowds of innocent people, killing 12 and injuring over 50.

A Bangladeshi national, Akayed Ullah, was indicted following the detonation of a pipe bomb on his person in a walkway connecting the Port Authority Bus Terminal and Times Square.
Speaking with MSNBC, former NYPD commissioner Bill Bratton said sources claimed Ullah carried out the act in the name of ISIS. When asked if the suspect had referred to ISIS, NYC Police Commissioner James O’Neill told reporters that comments were made but failed to expand.

Police have revealed that a secondary explosive device was attached to Ullah’s body – possibly a suicide vest – indicating that the premature detonation of the pipe bomb may have prevented a far more catastrophic event during rush hour in one of the busiest transportation hubs in the United States.

Akayed Ullah was reportedly a resident of Brooklyn and has been in the United States for seven years – and like Saifullo Saipov, the ISIS-supporting Uzbek terrorist who mowed down 20 cyclists in Manhattan just six weeks prior to the December 2017 attack, there were many questions as to what pathway Ullah utilized to enter the U.S., and also there were accompanying demands for increased immigration controls from President Trump and the federal government.