It is official: the US government’s partners in academia are going to openly spray the American people. It’s a move toward a future where they openly spray the skies to supposedly fight climate change. 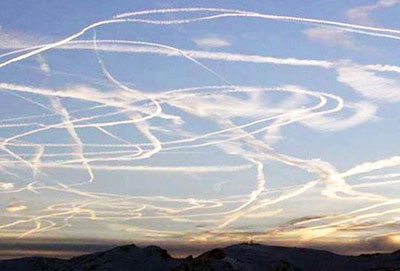 Harvard scientist David Keith and his partner are going to spray the sky with aluminium oxide and other chemicals to “experiment” with geo-engineering: solar radiation management (SRM) as they call it, to block out the sun.

They want to block out the sun to supposedly combat climate change, but the well documented history of weather modification for military purposes suggests there are other motives.

According to MIT’s Technology Review:
“A pair of Harvard climate scientists are preparing small-scale atmospheric experiments that could offer insights into the feasibility and risks of deliberately altering the climate to ease global warming.

They would be among the earliest official geo-engineering-related experiments conducted outside of a controlled laboratory or computer model, underscoring the growing sense of urgency among scientists to begin seriously studying the possibility as the threat of climate change mounts.

Sometime next year, Harvard professors David Keith and Frank Keutsch hope to launch a high-altitude balloon, tethered to a gondola equipped with propellers and sensors, from a site in Tucson, Arizona. After initial engineering tests, the «Strato Cruiser» would spray a fine mist of materials such as sulfur dioxide, alumina, or calcium carbonate into the stratosphere. The sensors would then measure the reflectivity of the particles, the degree to which they disperse or coalesce, and the way they interact with other compounds in the atmosphere.”

According to The Guardian:
“US scientists are set to send aerosol injections 20 km up into the Earth’s stratosphere in the world’s biggest solar geo-engineering programme to date, to study the potential of a future tech-fix for global warming.

The $20m (£16m) Harvard University project will launch within weeks and aims to establish, whether the technology can safely simulate the atmospheric cooling effects of a volcanic eruption, if a last ditch bid to halt climate change is one day needed.”

This comes after a United Nations “geo-engineering governance initiative” was launched, and the Carnegie Council announced the launch of a “Carnegie Climate Geo-engineering Governance Initiative.” This comes after former CIA director John Brennan proposed they spray the skies and do “solar radiation management” (SRM) to fight climate change, in 2016.

Some powerful forces are pushing very hard for the ability to spray the skies with aluminium, to modify the weather and set a precedent where they can spray anything on the people. 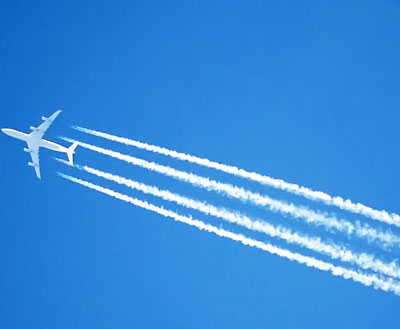 This precedent where we can’t identify what is sprayed on us could usher in a new era of chemical or biowarfare against citizens.
As victims of the US’ long history with experimenting on citizens can attest to, this is a serious possibility. Just research the Tuskegee Syphilis Experiments, the spraying of San Francisco in Operation Sea Spray, etc.

The forces pushing for spraying are not a mystery, and they’ve been at work on geo-engineering for decades.

Half a century of progress toward modifying the weather for military purposes (and to create a global warming false alarm to justify it) coming out of MIT and similar entities was well documented in Peter A. Kirby’s book Chemtrails Exposed: A New Manhattan Project. Or, you could read his even more recent article on the topic. Or, you could listen to an interview with Peter Kirby about all of this.

However, the truth is geo-engineering is obviously already happening in the US and around the world: just look up at the sky. Those giant high altitude “chemtrails” that turn into haze in the sky and persist all day are active geo-engineering efforts before they disclose it and take it to an even further level.

So what these people are really trying to do is normalize geo-engineering in the public’s perception.

David Keith is a pawn putting on a show of “experiments” for geo-engineering, experiments that seem fairly redundant if you know how far the technology of geo-engineering has been developed. Then they can say “we tested it and it’s safe,” and they will spray us much worse than they already are.

An alternative media journalist says: “Speaking from experience being in every major region of the US and one region of Australia in 2016 and 2017, I can tell you, California, particularly central and northern California has it possibly the worst right now.

In California, they spray heavy, and the dry air seems to let the material fall down on people so badly you can smell it, and in some areas (like Sacramento, California) the material they spray can make you instantly sick.

They sprayed Sacramento with a plastic smelling, sharp, irritating aerosol in 2016. They seemed to use two distinct kinds of spray: the first from about January 2016-August 2016 smelled starchy, powdery, kind of ashy and metallic like aluminium. The smell fills the air and the house if windows are left open.

It’s unmistakable that the spraying is what you smell: the smell always comes right after they spray, and you can watch it fall down.

Then in August, the smell changed distinctly to a sharp, plastic, static electric type of smell and it was much worse. 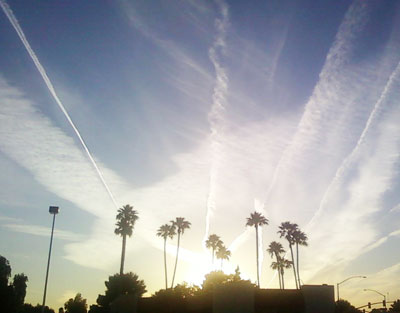 The worse plasticky spray pierces through closed windows unlike the other kind, and is carried by the rain, as if they spray into rain clouds.

The rain used to wash away the smell of chemtrails in my experience, but it actually carries the new plastic smelling spray straight through the walls of your house when it rains. It makes you wonder about what we will be subject to in the future, experiencing that, trying to shut the chemtrails out of the house.

We just can’t let this go further. They are already spraying, and they want little opposition to spraying much harder. Who knows what other interests they have in spraying: it seems they want to set a precedent. The US would probably like to direct rain systems, give some areas drought (Iran) and give some areas water.”

Some power players would probably like us to all be poisoned with aluminium. Nanoparticles of aluminium, what they have been known to spray, can make people docile and confused like someone with Alzheimer’s. Aluminium is detrimental to our health, comparable to mercury.

So we have to push back as hard as we can, no matter how exhausted we are, the people who see what’s happening and have the gall to stand up.

In conclusion, this is from an article in the alternative media about the Carnegie Council’s recent steps toward geo-engineering:
“If we don’t protest their proposal to spray the skies now, in 20 years we’ll be living in an aluminium poisoned nightmare where questioning the health of geo-engineering the weather, hazing out the sun to combat climate change, will be as taboo as being critical of vaccines.
We cannot allow geo-engineering to become normalized in the public consciousness.”