We’re beyond trying to prove that chemtrails aren’t happening. It is no longer a ‘conspiracy’. You needn’t look any further than the declassified document titled A Recommended National Program in Weather Modification: A Report to the Interdepartmental Committee for Atmospheric Sciences, written by Homer E. Newell of the National Aeronautics Space Administration, otherwise known as NASA.

What is happening now is the normalization of weaponizing weather, geoengineering the atmosphere, and the widespread use of chemtrails and HAARP-created weather catastrophes, against the will and beyond the awareness of the world populace. 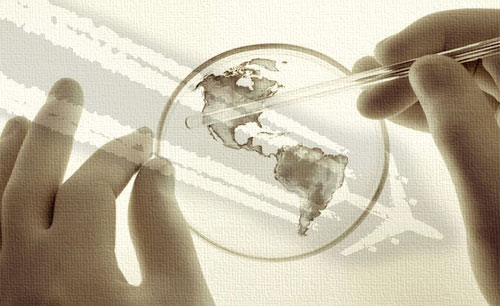 Another plan has to unfold in order for the spraying of our skies, and numerous other weaponized weather programs to continue. In addition to the trails in the sky, ‘strange weather’ also has to be explained and normalized now, since it too has become glaringly obvious.

The US military developed advanced capabilities that allowed the altering of weather patterns decades ago. In addition to atmospheric spraying, technology like the High-frequency Active Auroral Research Program (HAARP) was developed as an appendage to the military’s Strategic Defense Initiative, also known as Star Wars. HAARP is yet another weapon of mass destruction, operating from the outer atmosphere and capable of disrupting agricultural and ecological systems around the world.

Papers published by the Air Force outwardly state that the military must “own the weather” in order to be prepared for future events, and it must do so by 2025. The elite powers who run these weather alteration programs have been exposed, so now they must resort to Plan B.

To wit, YouTuber dutchsinse has been under attack for his keen observations concerning weather modification. At first ridiculed, he then found US Military confirmation that a Plasma ring is formed in a bullseye shape, then a ring shape when targeted high frequency radio waves which cross each other are aimed at the upper atmosphere.

By superheating the atmosphere to produce plasma rings with HAARP, and then focusing a microwave pulse ‘attack’ on a specified area they created Typhoon Haiyan (Yolanda). There is a viral video with over 1,608,000 views to date where you can watch dutchsinse explain the phenomenon as it unfolds. The video created such a stir, even the mainstream news responded on it with commentary by Dr. Mahar Lagmay at ABS-CBN News (ANC).


Once again, the tin-foil hat accusations against those who have been exposing weather modification programs no longer hold any integrity. The only possible solution is to try to force public acceptance of an obviously highly disturbing set of depopulation practices.

Now, the United Nations will give their blessing to geoengineering, and the Paris Agreement and global warming are being used as an excuse to force-feed chemtrail spraying and geo-engineered weather to the masses.

The elite plan to win the hearts of environmentalists by suggesting weather warfare is needed to save depleted coral habitats, with plans to pour ‘nutrients’ into the ocean to ‘protect biodiversity’ and other such ridiculous tactics.

A Bloomberg article stated:
“The University of East Anglia released a study in February (2016) that concluded geoengineering ideas were hazardous, costly or unrealistic. The Convention on Biodiversity has approached geoengineering with caution, seeking to constrain the development unless there is effective global governance, Williamson explained.

‘Risks of having local imbalances of climate are quite high, we’re not quite sure how it would turn out’, Williamson said. ‘If you have a climate catastrophe, a flood or storm, the accusation will be that it resulted from your action in the atmosphere’.” 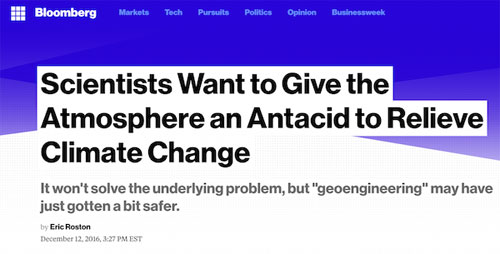 In yet another MSM (mainstream media) article, geo-engineering the weather is talked about in a tongue-in-cheek manner. The headline says that scientists want to “give the atmosphere an antacid to relieve climate change”. Interestingly, there is no mention of the many subversive and health-damaging effects of spraying chemicals and heavy metals into the atmosphere. Nor is social and environmental devastation mentioned in incidences such as the HAARP created Typhoon Yolanda.

Many other ‘strange weather’ events have been linked, if tenuously, to these military programs. The excuse of global warming is simply a distraction technique.

The elite can ‘normalize’ weather modification as much as they like, but an increasingly awakened population understands that these programs have truly sinister aims.

Our medical system is a cartel fueled by tyranny for profit, not prevention