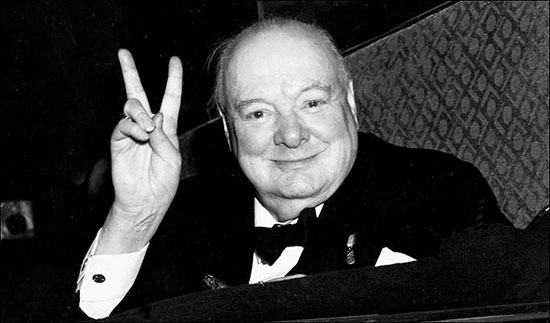 Historian Joseph Laconte of King’s College wrote in the Weekly Standard, a Neocon flagship, that July 4, 1940, signified “the moment when the two great democracies (Great Britain and America) solidified their ‘special relationship’.”[1] He moved on to say that Churchill challenged the United States to fight “against international terrorism and tyranny”.[2]

We ought to remember Churchill during America’s Independence Day, Laconte insinuates. According to him, Churchill was a moral realist who saw things the way they really are.
Nothing could be further from the truth.

Laconte was able to get away with nonsense like this because he was writing for the Weekly Standard, a magazine whose goal and purpose is to essentially or ideologically finish the job that Trotsky had started in the Soviet Union.

Trotsky always wanted violent revolution in the name of “democracy”. These people always thought that creating subversive movements is always good. As flaming David Horowitz himself declares, it is tikkun olam, the healing of the world.

David Horowitz writes: “For nearly two hundred years, Jews have played a disproportionate role as leaders of the modern revolutionary movements in Europe and the West… By carrying the revolution to its conclusion, socialists would usher in a millennium and fulfill the messianic prophecies of the pre-Enlightenment religions that modern ideas had discredited.”[3]

Irving Kristol, the father of Bill Kristol, was just advancing Trotskyism when he shifted to Neoconservatism. The “honor I most prized was the fact that I was a member in good standing of the (Trotskyist) Young People’s Socialist League (Fourth International)”, Kristol once bragged.[4]

Kristol was not just a former Trotskyist, but a former neo-Marxist, neo-socialist, and neo-liberal.[5] And this Neoconservative movement, as Jewish writer Sidney Blumenthal has shown, found its political and intellectual ideology “in the disputatious heritage of the Talmud”.[6]

Even after the birth of the neoconservative movement, many of its members such as Stephen Schwartz of the Weekly Standard and Joan Wohlstetter of the RAND Corporation still had a burning thirst for Lev Davidovich Bronstein, known as Leon Trotsky.[7]

Going back to Laconte, is it true that both Britain and the United States were “the two great democracies”? Well, it depends on what one means by “democracy”. If democracy means that the United States and Britain were free to plunder and annihilate conquered and oppressed people in much of the world, then the two countries were indeed “democratic”. If democracy means that both countries used the moral and political order to help oppressed people of the world, then the answer is a resounding “No!”.

Consider for example Winston Churchill during World War I and World War II. As an avowed social Darwinist and flaming Zionist at the same time,[8] Churchill thought it was all right to literally liquidate German civilians during World War I. Churchill became Prime Minister in 1940. During his speech, he unequivocally declared: “You ask, what is our policy? I will say: it is to wage war, by sea, land, and air, with all our might…”[9]

Here once again we see the marriage (or perhaps competition) between the Darwinian ideology and Jewish subversive movements. Both Zionism and Darwinism support the promiscuous idea that wars will bring about the greatest good, at the expense of the weak and needy. Wars, according to Darwin, is inevitable because the “higher animals” need to wipe out the “lower” ones.

The Malthusian doctrine, said Darwin, could be applied “with manifold force to the whole animal and vegetable kingdoms”.[10] In that sense, “the preservation of favored races in the struggle for life”, which incidentally is the subtitle of Darwin’s On the Origin of Species, is of primary importance. Darwin, in a covert and pernicious way, subverted the moral order and replaced it with the “favored races”. It was no coincidence that colonial empires were viewed in a Darwinian terminology. As one historian puts it, “Contemporaries explained this rush for land in terms of Darwin’s evolutionary theories. The fittest and most adaptable of the great powers would survive and grow stronger at the expense of the enfeebled… As Churchill observed in 1899, ‘the position of England among the nations is the position of a dog with a bone in the midst of a hungry pack’.”[11]

At one point, Churchill said: “I hate Indians. They are a beastly people with a beastly religion.”[12] Toye writes that Churchill “gave his views on the Indian famine of 1873-4, claiming that Viceroy had been right to refuse demands that he prohibit grain exports.”[13] Another observer writes that “Churchill had corroborated Malthus’s perspective, writing of an 1898 Indian plague: ‘a philosopher may watch unmoved the destruction of some of those superfluous millions, whose life must of necessity be destitute of pleasure’.”[14]

Churchill said elsewhere: “I am strongly in favor of using poisoned gas against uncivilized tribes. The moral effect should be so good that the loss of life should be reduced to a minimum.”[15]

Darwin used similar words to describe “uncivilized men”.[16] In fact, Darwin constantly used phrases such as “higher animals” to describe how the powerful would eliminate the weak. Following Darwin’s ideology, Churchill declared: “I do not admit for instance that a great wrong has been done to the Red Indians of America, or the black people of Australia. I do not admit a wrong has been to those people by the fact that a stronger race, a higher grade race or… a more worldly wise race… has come in and taken their place.”[17]

When people were objecting to his views about poisoned gas, Churchill said that they were being too squeamish, adding that “the objections of the India Office to the use of gas against natives are unreasonable. Gas is a merciful weapon than [the] high explosive shell, and compels an enemy to accept a decision with less loss of life than any other agency of war… Why is it not fair for a British artilleryman to fire a shell which makes the said native sneeze? It is really too silly.”[18]

It got even better: “when an aide pointed out that Tito intended to transform Yugoslavia into a Communist dictatorship on the Soviet model”, Churchill responded by saying: “Do you intend to live there?”[19]

Churchill, as should be evident by now, has a history of liquidating civilians mercilessly. He said way back in 1915, right after World War I broke out: “I know this war is smashing and shattering the lives of thousands every moment – and yet, I cannot help it – I love every second I live”.[20]

Churchill continued: “The twin roots of all our evils, Nazi Germany and Prussian militarism, must be extirpated. Until this is achieved, there are no sacrifices we will not make and no lengths in violence to which we will not go”.[21]

So, when he explicitly said that he wanted “to starve the whole German population – men, women and children, old and young, wounded and sound – into submission”,[22] he meant it. This became apparent when he told Joseph Stalin in 1944: “The problem was how to prevent Germany getting on its feet in the lifetime of our grandchildren.”[23]

When Stalin and other Communist leaders were creating hell in Europe in the Bolshevik slaughter houses, perceptive observers began to get upset. Yet again Churchill’s response was astonishing: “Why are we making a fuss about the Russian deportations in Romania of Saxons (Germans) and others?… I cannot see the Russians are wrong in making 100 or 150 thousand of these people work their passage… I cannot myself consider that it is wrong of the Russians to take Romanians of any origin they like to work in the Russian coal-fields”.[24] 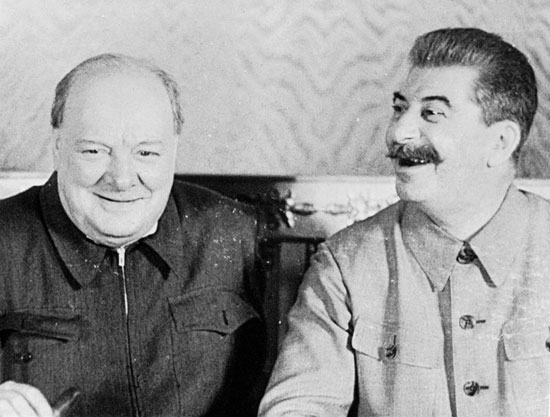 Again, after the destruction of Dresden, Churchill tried very hard to wash his hands off. He said: “I cannot recall anything about it (Dresden). I thought the Americans did it”.[25] When all is said and done, it was pretty clear to perceptive observers and scholars that Churchill and Roosevelt intended to destroy Germany.

“No wonder that, learning of this, a civilized European like Joseph Schumpeter, at Harvard, was driven to telling ‘anyone who would listen’ that Churchill and Roosevelt were destroying more than Genghis Khan… Winston Churchill was a Man of Blood and a politician without principle, whose apotheosis serves to corrupt every standard of honesty and morality in politics and history.”[26]

Historian Thomas Goodrich writes: “What had taken the German nation over two millennia to build, had taken its enemies a mere six years to destroy. When the fighting finally ended on May 8, 1945, the Great German Reich which had been one of the most modern industrial giants in the world lay totally, thoroughly and almost hopelessly demolished.

Germany, mused an American newsman drifting through the rubble, resembled nothing so much as it resembled ‘the face of the moon’. Omar Bradley agreed. After viewing for himself the blackened, smoking wreck, the US general reassured his countrymen, ‘I can tell you that Germany has been destroyed utterly and completely’.”[27]

By 1919, Churchill already had blood all over his hands. “We are enforcing the blockade with rigor” he said, “and Germany is very near to starvation”.[28] When the dust settled, Churchill ended up slaughtering almost 90,000 German civilians. He also was responsible for the deaths of more than a million Indians.

“Britain’s wartime prime minister did not discuss in his six-volume account the 1943 famine in the eastern Indian province of Bengal, which killed 1.5 million people by the official estimate and 3 million by most others.

One primary cause of the famine was the extent to which Churchill and his advisers chose to use resources of India to wage a war against Germany and Japan, causing scarcity and inflation within the colony.”[29]

But it would have been almost impossible for Churchill to slaughter so many people (most specifically the Germans) without outside forces, for Churchill himself was financially the creation of a Jewish financier whose name was Ernest Cassel.

Cassel, writes British historian David Cannandine, “was widely disliked and distrusted as a ‘cosmopolitan financier’ whose loyalty was neither to party or nation, but only to profit”. Cassel was also “an irresponsible wire-puller who had poor politicians in his pocket.”[30] One of those poor politicians was again Winston Churchill.

Churchill, who was “short of money and eager for power,” became “Cassel’s creature”.[31] Cassel eventually bailed Churchill out of debt. In return, Churchill ended up literally starving and liquidating German civilians by the millions.

“When Kaiser requested permission to buy 2.5 million tons of food, Churchill denied the request because his aim, in his own words was to ‘starve the whole population – men, women and children, old and young, wounded and sound – into submission.’

On March 3, 1919, ‘four months after Germany had accepted an armistice and laid down its arms’ Churchill told the House of Commons that: ‘We are enforcing the blockade with rigor, and Germany is very near starvation”.[32]

In short, for anyone to say that Churchill spreading “democracy” and fighting “international terrorism and tyranny” is just window dressing. And historians know better. They aren’t that fool.