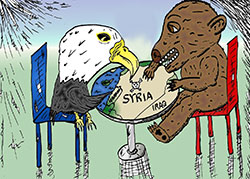 Virtually all print and electronic scoundrel media reports on Syria turn truth on its head – some of the worst rubbish in memory, scandalous by any standard. Facts never interfere with daily propaganda – US administration and Pentagon press agent journalism, replicated in all Western societies, a deplorable perversion of what news, information and analysis are supposed to be all about.

Trustworthy alternative media along with respected independent writers and analysts are the only reliable sources on virtually all world and national issues, especially ones pertaining to war, peace and geopolitics.

“(P)re-election hysteria” made matters worse in America, according to Russian Foreign Ministry spokeswoman Maria Zakharova. Given daily carpet-bombing of truth for political advantage, she finds it hard “stay(ing) within the limits of diplomatic language.”

Lunatic neocons infesting Washington test the patience of virtually everyone supporting Syrian sovereignty and rights of its long-suffering people – victims of US imperial viciousness.

“(U)tterances” alone out of Washington make normal diplomatic relations untenable, Zakharova explained, saying:
“They said at first they were breaking off and abandoning something, that they’d run out of whatever it might be and had suspended it yet another time.”
“Then a day passes and suddenly I read they’ve cancelled contacts on a bilateral basis but, generally speaking, they will continue making efforts in multilateral formats.”
“And after a few more hours, I hear a completely different version, which says they haven’t cancelled contacts but rather have suspended them, and if Russia jumps over the bonfire once again, they will do this and that.”

Listening to them is a waste of time, Zakharova added, bashing “the Russian bear” heading towards irreparably rupturing ties, risking war between the world’s dominant nuclear powers because of America’s rage for dominance.

America and its rogue partners represent pure evil, threatening world peace and security like never before.

Voters have no say whatever – a nation run by fantasy democracy, not the real thing, most people none the wiser, brainwashed into submission, kept from rising up and resisting a deplorable system harming their lives, welfare and futures.

Syria is ground zero for challenging US imperial madness.

According to Russian upper house Federation Council International Affairs Committee chairman Konstantin Kosachev, his government and military will stay involved in Syria as long as it takes to preserve its sovereign independence.
“As soon as law and order are restored there, Russia will leave” he said – letting its people alone decide who’ll lead them, free from foreign interference.