Astonishing. By the way, that debt growth amounts to roughly 7.5% of the entire US economy.
By comparison, the Marshall Plan, which completely rebuilt Western Europe after World War II, cost $12 billion back in 1948, or roughly 4.3% of US GDP at the time. 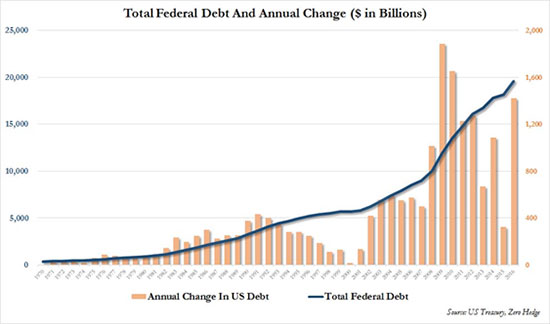 The initial appropriation for the WPA, perhaps the largest of Roosevelt’s New Deal “make work” programs that employed millions of people, cost 6.7% of US GDP.
And, more recently, the US $700 billion bank bailout at the beginning of the 2008 financial crisis was the equivalent of 4.8% of GDP.
So basically these people managed to increase the national debt by a bigger percentage than the cost of the New Deal, Marshall Plan, and 2008 bank bailout.

What exactly did Americans get for that money?
Did they spend $1.4 trillion on achieving world peace, eradicating poverty, saving the planet, or some other pipedream?
Did they finally fix America’s crumbling infrastructure that has been in desperate need of repair?
Did they send a gigantic tax refund check to every man, woman, and child in the country?
Actually the answer is: none of the above. They squandered it all.

The government didn’t have to spend hundreds of billions of dollars to bail out the banks. All things considered, 2016 was a pretty normal fiscal year for the federal government. There were no major emergencies to drain taxpayer funds. Yet they still managed to blow $1.4 trillion because this level of waste and spending is now baked into the system. Even if they dramatically slashed spending and got rid of entire departments of the federal government, they would still be hemorrhaging cash at a rate far greater than the economy can now possibly grow. 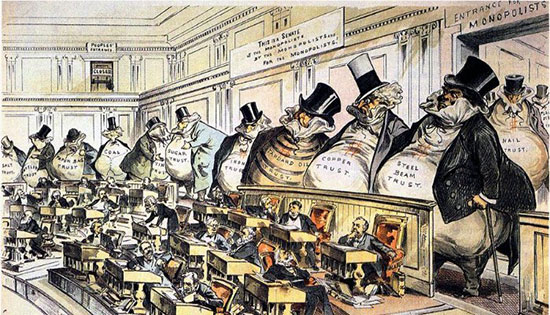 So if you add up military spending, homeland security, national parks, and President Obama’s jet, it’s just a fraction of what they spend on Social Security and Medicare. These programs consume the vast majority of US tax revenue, forcing the government to borrow mind-boggling amounts of money to fund its operations, even in good times. (Just imagine how much the debt will grow when times get tough again.) What’s even crazier is that Social Security and Medicare aren’t even properly funded. Both are rapidly running out of money.

The programs’ annual trustee reports show that their primary trust funds will become completely depleted starting in the next few years. In fact one of Social Security’s major trust funds for Disability Insurance was actually fully depleted last year.

So even though these programs are already draining taxpayer resources and forcing the government to take on more and more debt, they are in need of a HUGE bailout.

This leaves precisely ONE option: default… but on whom?

It’s possible the government could try to borrow the $42 trillion that they calculate is necessary to make these programs solvent again. That seems extraordinarily unlikely. But even if it were possible to print and/or borrow that much money, it would either create a terminal currency crisis, or force the US government to default on unaffordable interest payments, throwing the financial system into chaos.

The other option is to simply default on the future beneficiaries of these programs, telling people: “Hey, sorry, we wasted all of your money and there’s nothing left”. So their choice comes down to either extorting the banks or extorting the taxpayer.
Gee, we wonder which option they’ll pick…