MOMENT OF TRUTH: The Political Stuff Nobody Wants to Talk About (4)

There May Be 297,000 Operatives Involved

In a previous article, I had speculated about how many operatives may be involved in conducting the arrests. This is an excerpt where I worked up some numbers:

“It May Take Half A Million… Or Less

If it took 500 officers from eight different police divisions to successfully round up 50 armed drug dealers, it may take half a million personnel to grab fifty thousand criminals all at once.
Furthermore, the Schenectady sting was all done in a few hours. The leaked plans for mass arrests suggest it could take nine days, or even up to two weeks.
This would give time for the same teams of operatives to pounce on multiple locations within a relatively short time window.
Let’s say it took about five days instead of one. In that case, you may only need 100,000 personnel instead of 500,000.
Bear in mind that I have been getting high-quality briefings — for years now — about huge covert teams that are already in position for this purpose.
They are living and working in plainclothes, but all they have been doing with the majority of their time is training for these operations.”

This article went up on September 8th, 2018. The speculation was that there were somewhere between 100,000 and 500,000 operatives involved in these pending actions.
Four days later, Q appeared to give a direct answer to this speculation.

The number of operatives involved in the pending mass arrests may well turn out to be 297,000 — and Q indicated that this was “Military planning at its finest.”
It makes sense that you would need this many operatives in order to safely and properly conduct an operation of this scope and complexity:

Given that our articles are intensely popular, and that Q revealed the Secret Space Program just a week later, this may well have been a response to our speculation.

September 12th: The Swamp Is Trying To Fight Back

Right in the middle of the worst of the hurricane heading towards Washington, DC, the president tweeted “the Swamp is trying to fight back:” 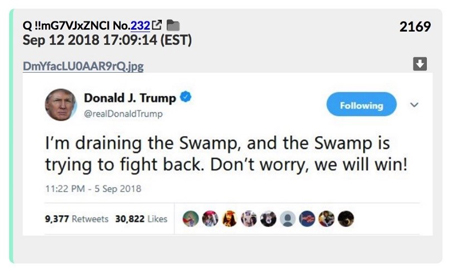 Total Panic In DC And The UK

There have been many Q posts describing a state of panic in DC, and this one from September 19th included the UK as well:

This certainly fits in with the mass-media censorship we are now seeing.
This is a totally desperate move, since millions of people are losing access to alternative media outlets they love.
You can’t conduct operations like this for very long without it blowing up in your face.

The Q Anon comment boards lit up with all sorts of hate against yours truly in the aftermath of this stunning verification of the Secret Space Program.
This included posts where my face was put next to that of Hitler on 8Chan — although this may have been by a supporter making a point about what he was seeing. 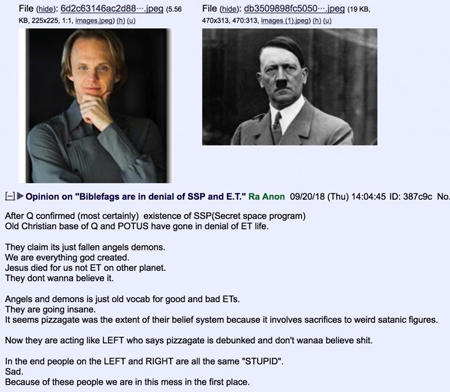 Another noteworthy event was Corey Goode coming forward on Jimmy Church’s radio show, two days after this announcement was made. Here is a link where it was posted.

“Above Majestic” Goes Much, Much Farther

The film Above Majestic has been in development for nearly two years now, beginning with footage collected by Jordan Sather.
This includes seldom-seen footage of William Tompkins before his death, who reveals a variety of excellent points about the Secret Space Program.
I originally taped for this film back in April (2018) or thereabouts. Orchard Entertainment later wanted to distribute it as a theatrical movie.
I then requested that I be allowed to re-tape all of my sections of the film, once I saw the finished product and assessed what it needed.
The re-taping was done in very early August (2018). I have since been able to view the finished product before its official debut next week.

This Is the “All in One” Red Pill

I do feel very safe in saying this: Never before has there been an “all in one” burst of full disclosure like this in a single film.
The production company did an excellent job of adding a wide variety of B-roll, as it is called, including things I never expected them to find.
In light of the incredible, mass media censorship happening right now, the timing of the release of this film couldn’t be any better.
I will also be launching a five-week online conference in the near future, entitled Ascension Academy.
Before then, Above Majestic will be a shocking “truth bomb” you can share with people who are still asleep, at the normal cost of renting a movie.
It actually turned out much better than I thought it might. The message it conveys, from a variety of insiders, is highly compelling.

Your Support Is Appreciated

Please remember that renting a movie like this also supports disclosure financially at a time where it is needed most. Despite all the problems and public attacks we have endured, this film stands on its own. This is also the first time I have had a major starring role in a theatrical release. I am very proud of everyone’s work on the film, and feel that it says many things that are extremely urgent and timely.
Sadly, the premiere had to be canceled due to very serious threats, which could have affected everyone at the party. Nonetheless, it seems next to impossible that the Cabal will be able to stop you from renting this movie, regardless of all their advanced tradecraft and trickery. Here is the first trailer, where you can see some of it for yourself.

Much More to Come

With the sealed indictments now up to 55,000 and counting, we can certainly expect more “action” in the near future. I have a bunch of interviews to conduct as part of my contract for the promotion of the film with Orchard, and will link to them here when they arrive. The weird hurricanes, massive economic turbulence and partial disclosure drips in the mainstream media are all signs that a “Truth Tornado” is heading straight for us. We can expect that things will be very interesting once Q Anon decides to start posting again. This is truly “the calm before the storm.” 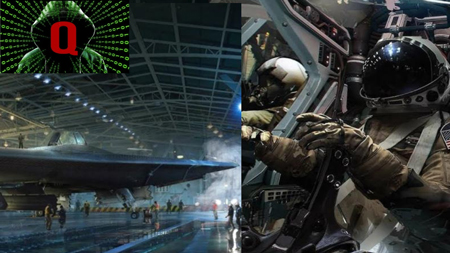 Before we sign off here, I wanted to make one last statement about the Q Anon briefings on the Secret Space Program. The Q Anon posts are widely respected and taken very seriously. Many obvious efforts have been made in them to prove they are emerging directly from within the current US administration.
When the indictments unseal, and the arrests finally happen, everyone will then look back to the Q Anon posts and see how accurate they were. They are extremely complex, and the amount of information that has already been conveyed is truly staggering.

We Have a Great Opportunity

Now that Q Anon has said that we are not alone, and that secret space programs exist “outside of public domain,” we have a great opportunity. In the post-mass-arrests world, we can have a mass call to action to alert people to these statements of September 19th, and hold the Alliance accountable for them. This may have been by design. The Alliance has given us a great tool that we can use to ensure that disclosure happens even faster.

If enough people call attention to those posts, and insist that answers be provided, we can get the truth much faster. We can ask what the “Space Force” was all about, and why we were told we would be going to Mars “very soon.”
The future is quite exciting, and exactly how or when this will happen is anybody’s guess. Either way, there is a tremendous feeling of excitement brewing.
And in case you are already a victim of de-platforming, just remember: your life has value regardless of whether you are on Facebook or not. Many whose voices were suppressed and silenced will become publicly-recognized heroes in the post-Disclosure society. We will not let the deaths of Jim Marrs, John DeCamp, William Tompkins, Preston Nichols, Karl Wolfe, Bob Dean and other brave heroes be forgotten.

Update, Next Morning: Why Q May Be Remaining Silent Until After the Election

Brad Kauilapele sent me this link, ironically at exactly 4:20 AM, to an article on Neon Revolt. I had earlier feared this was another Cabal “fake news” channel like Neon Nettle, but I have since realized this guy is very real. He is in that phase that all of us go through at some point where you are constantly pumping out content as it catches on. He makes a very good point — namely that the Hatch Act (5 USC 7321-26) prohibits the timing of arrests to affect an election. This means the Cabal might be able get off entirely, on a technicality, if significant Q posts were put out prior to November 7th.
Thankfully, we only have a week and a half left to wait. It’s a very short article, unlike yours truly, but worth reading.

This certainly strikes me as a plausible explanation for the otherwise very peculiar silence we are now seeing.

Another Update: The Presidential Emergency Messaging Test Did Happen On October 3

One of the things we discussed in the previous article was the idea that the Emergency Messaging System would be used to announce the mass arrests. This appears to be the only system that the Alliance can use to bypass Deep State corporate media censorship.
They did, in fact, run the test at 2:18 PM Eastern time on October 3rd. My phone went off and I was absolutely stunned. This was just an initial test to confirm that the messages can be conveyed — but it was very real.

Here is a very troubled Electronic Privacy Information Center update about this:
“Intrusive Presidential Emergency Alert Scheduled for October 3 at 2:18 PM EDT
The Department of Homeland Security and FCC have rescheduled a controversial test that allows the President to suspend cell phone service and communicate directly with cell phone subscribers in the United States.
The test message header is labelled ‘Presidential Alert’ and will include the following text ‘THIS IS A TEST of the National Wireless Emergency Alert System. No action is needed.’
Cell phone users cannot opt out of the test. The President has sole authority to determine when the alert will be activated.
The test will use the same special tone and vibration as with alerts for Tornado Warnings and AMBER Alerts.
It is unclear why the alert is designated a ‘Presidential Alert’ or when it may be issued.”
Now, as a result of reading these articles and studying all of this, you may have a better idea of what this is going to be used for.
I say “Bring it on.”