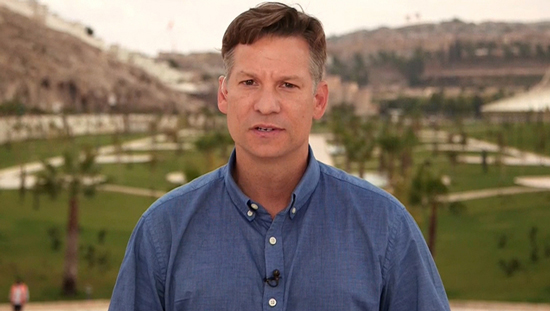 NBC reporter Richard Engel claims he was kidnapped by CIA agents posing as Syrian militants in order to spread anti-Syrian propaganda in America.

Back in 2012, Engel and five other members of an NBC News team were kidnapped by supposed Syrian armed gunman in Syria. They were held for five days.

Immediately after his release, Engel spoke to NBC News, denouncing the Assad regime: “This is a government militia. These are people who are loyal to President Bashar al-Assad. They are Shiite.”

Transcript from 2015 of a live discussion between DemocracyNow anchors Juan Gonzales, Amy Goodman and As’ad Abukhalil about Richard Engel statements from 2012

This is a rush transcript. Copy may not be in its final form.

Juan Gonzalez: NBC News is at the center of a new controversy, this time focused on its chief foreign correspondent, Richard Engel. Back in 2012, Engel and five other members of an NBC News team were kidnapped by armed gunmen in Syria. They were held for five days. Just after his release, Engel spoke on NBC News about his captors.

Richard Engel: I think I have a very good idea of who they were. This was a group known as the Shabiha. This is a government militia. These are people who are loyal to President Bashar al-Assad. They are Shiite. They were talking openly about their loyalty to the government, openly expressing their Shia faith. They are trained by Iranian Revolutionary Guard. They are allied with Hezbollah.

Juan Gonzalez: That was NBC News chief foreign correspondent Richard Engel speaking after he was released in December 2012.

A New York Times investigation prompted Engel to revise his story and reveal he was actually captured by Sunni militants affiliated with the U.S.-backed Free Syrian Army. Engel said the kidnappers had, quote, “put on an elaborate ruse to convince us they were Shiite Shabiha militiamen.” According to the Times investigation, NBC knew at the time that Engel and the others were held on a chicken farm widely known to be controlled by a Sunni criminal group.

NBC was also informed of the identities of two Sunni men possibly involved in the kidnapping, but the network and Engel never relayed this information to the public and repeatedly claimed the kidnapping was done by Shiite militants linked to Syria President Assad.

Amy Goodman: The New York Times investigation also raised questions about Richard Engel’s rescue. Engel originally said he was rescued by Sunni rebels after his captors accidentally drove into a checkpoint. In fact, the Shiite rebel groups holding the NBC crew created a ruse to free them and blame the kidnapping on the Assad regime, the Sunni groups that were holding him blamed it on the Assad regime. Engel had also previously said two of his captors died during a gunfight at the checkpoint.

The controversy over Engel’s kidnapping comes just three months after NBC suspended Nightly News anchor Brian Williams after admitting that a story he told about coming under fire in a helicopter during the Iraq War was not true.

Journalist Glenn Greenwald described NBC News’ conduct in the Engel case to be more troubling than the Brian Williams scandal. Greenwald wrote, quote, “[T]he NBC story was quite likely to fuel the simmering war cries in the West to attack (or at least aggressively intervene against) Assad. That’s a far more serious and far more consequential journalistic sin than a news reader puffing out his chest and pretending he’s Rambo,” he wrote.

We’re joined by As’ad AbuKhalil, a professor of political science at California State University, Stanislaus. He runs the Angry Arab News Service blog. He expressed serious doubts about the circumstances surrounding Engel’s captivity and release when the story first broke in December of 2012. 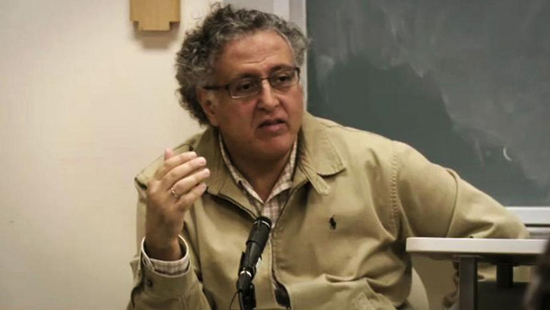 So, let’s begin with what has been revealed now and what you were saying, As’ad AbuKhalil, back then, at the end of 2012, after the newsmen were released.

As’ad Abukhalil: Well, Amy, I was early on skeptical, not only about the conditions in which he was supposedly released and the statements he made at the time, but I was skeptical about the entire enterprise of Western journalistic coverage of Syria, particularly by American correspondents in the region. There was a lot of stuff that’s been told and transmitted that contradicted the realities on the ground.

They created this myth about a moderate, secular group called the Free Syrian Army. And they were, in fact, attacking people like myself and others who were saying that the bulk of the fighting force of the so-called Syrian revolutionaries were militant fanatics of the bin Ladenite style. And in reality, we knew at the time that what is so-called the Free Syrian Army is no more than a coterie of criminal gangs and thugs that were running amok throughout the area of the so-called liberated sections of Syria, and they were engaged in sectarian kidnapping, ransoms, murder, indiscriminate shelling, and they would sometimes kidnap people, and they’d sell them to other gangs and so on.

But there is also something political, as Glenn mentioned, which is a war lobby. There were people hedging at the time in order to get the United States to intervene militarily on the side of these rebels, along with Saudi Arabia, the same allies that we now have in the so-called war on Yemen. And at the time, the statements that Richard Engel made – I mean, there is a political story, and there’s a journalistic story.

There are questions to be raised not only about the credibility of Mr. Engel, but also about bad judgment. And this is a correspondent, one of the few who’s fluent in Arabic. He can speak it fluently, he can understand it. And yet, upon his release, he taped a video in Arabic for the propaganda arm of the Free Syrian Army, in which he made fantastic claims.

I went and watched it, to my amazement. He admitted to The New York Times that in fact he may have lied when he said he witnessed, at the time of his rescue, dead bodies. Now he’s saying he didn’t. But if you watch the video he taped for the Free Syrian Army benefit, he in fact claimed he saw more dead bodies upon being captured. He also told a fantastic story about how these awful Shiite militias went about to burn somebody alive, but they couldn’t find enough gasoline. I mean, he has to account for that.

Amy Goodman: Let us go to Richard Engel and his crew appearing on NBC hours after their release in December 2012, Engel describing how he and his crew were ambushed by a group of about 15 gunmen while traveling with Syrian rebels and held for five days in captivity. He then described how they were freed.

Amy Goodman: That was Richard Engel describing what happened, hours after their release in December 2012. As’ad AbuKhalil, that description, how it has changed, and how much NBC knew? They, you know, used all of their resources to try to free these men, these reporters, their reporters, and their fixer, as well. And talk about who they communicated with to show how they knew who the forces were who were holding him. Again, the story now is that it was both Sunnis that held him and Sunnis that then staged this release.

Amy Goodman: But both of them saying that it was Shia affiliated with Assad. And, of course, when you say Shia, people think Iran, as well.

As’ad Abukhalil: Not only that, I mean, Richard Engel, upon his release, went out of his way to invoke the names not only of Iran, of Hezbollah. And he said it, in fact, in one of the tapes early in the program. And when he did the interview with the Free Syrian Army propagandists, which is available on YouTube, he in fact said that their demands were the release of four Iranians in Syria, as well as two militiamen from the Amal Shiite Lebanese militia. But why did he invoke Amal, if it was really Amal, why did he invoke Hezbollah? 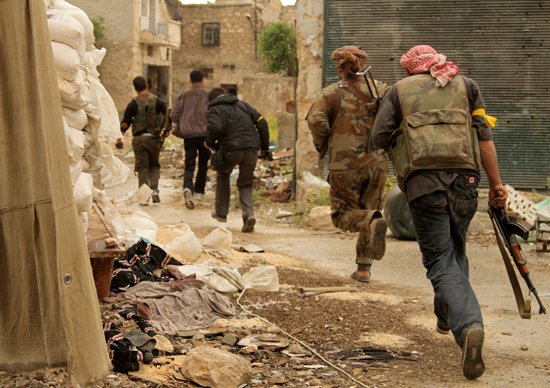 And then he would say repeatedly, with a straight face, that “We knew they were Shabiha because they told us.” That word “shabiha” is colloquial Syrian for “thugs.”

So, this is the name that is given to pro-Assad regime militiamen by their opponents and the armed rebels. Imagine somebody identifying himself or herself as a “thug.” And that’s the story we were led to believe.

Plus, there was a footage of the actual room in which these hostages were held. You look at this old room with old paint, and suddenly you see fresh paint of clearly, explicitly identifiable Shiite slogans. Plus, he said they were, he said that in the segment which you aired, in fact, he said they were explicitly worshiping in a Shiite manner. I mean, didn’t he in any way, you know, question why that was the case?

There are two missing bishops from Aleppo that nobody talks about. They kidnapped even nuns. But there is such a glamorization and such romanticization of these awful rebels in Syria, whether of the criminal type of the Free Syrian Army or the bin Ladenite style in Syria, to the point where nobody wanted to believe that they are capable of such a, you know, dastardly act. And that’s what happened.

So the story has two levels: the political one and the journalism one. And on both cases, Richard Engel’s credibility has sunk very low, I mean, in my judgment, if you watch the video and the things he was saying, fawning praise for the Free Syrian Army.

And also, let us mention, he in fact credited a group called Ahrar Ash-Sham, which is a bin Ladenite group founded by a friend of Osama bin Laden. He was calling them, the word in Arabic can either mean “rebels” or “revolutionaries.” And he heaped praise on them. He even taped a propaganda video for their benefit, as well.

So there is a political agenda and a political service that was done. Now, in no way I am saying – I don’t have any evidence – that Richard Engel was part of the plot or he was in it. He looked genuinely scared and relieved when he was released and so on. But he made statements that we now know cannot be true.

Amy Goodman: As’ad AbuKhalil, we want to thank you for being with us, professor of political science at California State University, Stanislaus. He runs the Angry Arab News Service blog.