New crop circles around the world, reported this summer. What message do they bear? 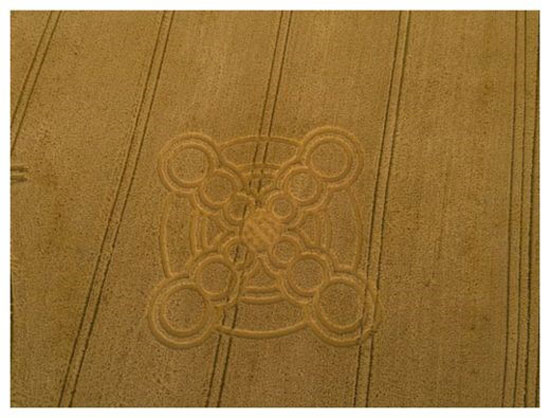 Confused residents woke up one July morning to discover a mysterious crop circle had been created in a nearby field and looks suspiciously like a recent children’s craze.

The unusual design was spotted near Climping Beach in West Sussex and experts believe the mysterious markings appear to be a fidget spinner – because there are four circular “arms” linked to a central hub.

Matthew Williams spotted the 200ft formation and understood the mysterious shapes were carved out of the crops on Wednesday, July 19. The crop circle expert, from Avebury, Wilts, said: “This is a great formation. It certainly could be the world’s largest fidget spinner, although I have no idea who created it. The circles are so precisely engineered, it’s hard to fathom that they might not have been created by machines. I don’t know who left it there, but whoever did definitely had some time on their hands. The crop circle reminded some of the popular gadget which has taken the world by storm.”

Fidget spinners have been such a popular craze with children this year that some schools have even banned them. Police recently warned an increase in crop circles was down to drone users, who share their footage online. Farmers were urged by to report any which appeared on their land. 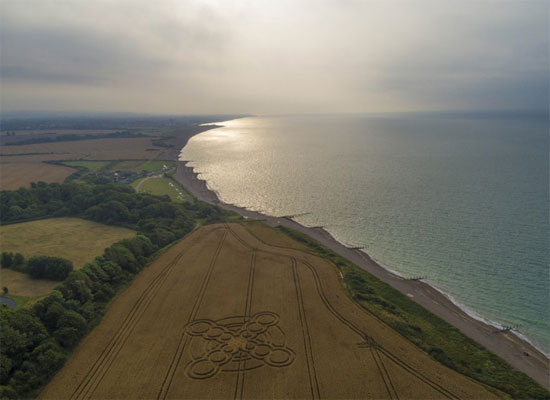 Another new crop circle was reported on July 18, in Cley Hill, Wiltshire. 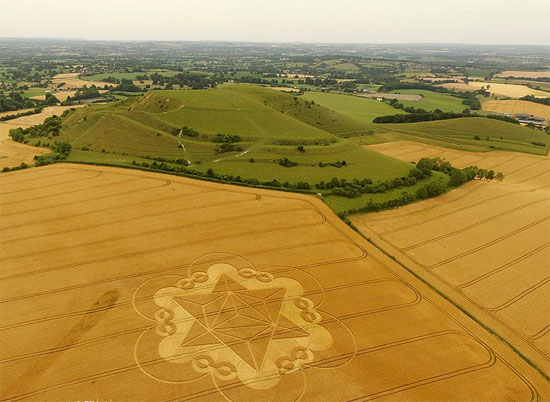 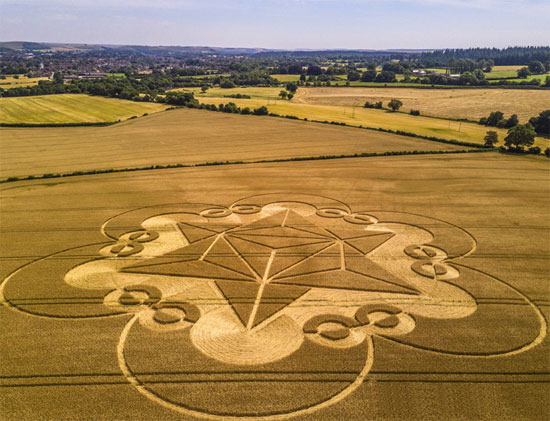 Yet another crop circle was spotted in Hackpen Hill, Broad Hinton. Wiltshire, on 8th of July. 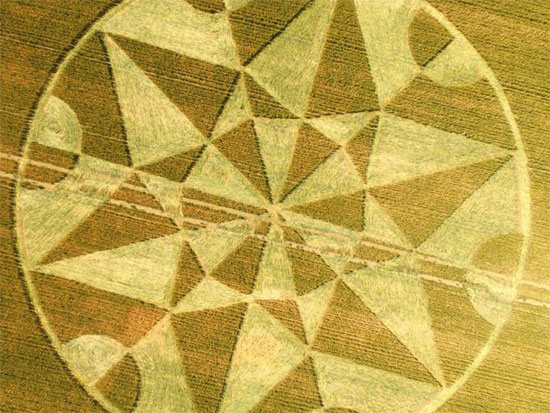 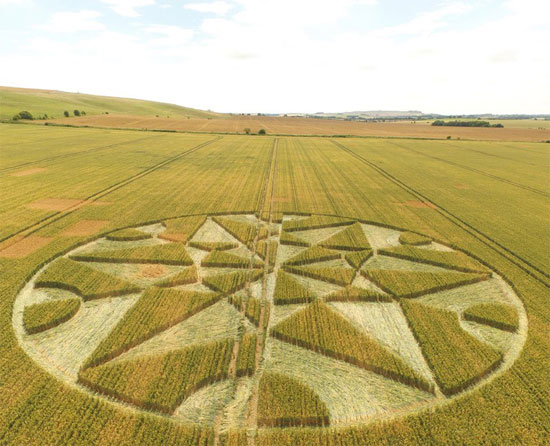 The farmer at Hackpen Hill who noticed it had requested time to organize a pathway suitable for visitors going to the crop circle in an orderly way that causes minimal damage to his crop. He allows people to come see it on a daily basis, from 9 in the morning to 9 in the evening. This is not the first time when a crop circle appears on his field. Brighter Futures charity offers him money for keeping his crops untouched, so as many people can see the crop circle. 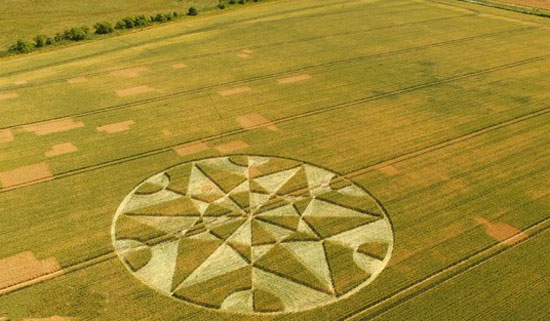 Another mysterious crop circle has been reported near Sofia, Bulgaria at Milena Bogdanov on July 5, 2017. Local news announced: “Near the city of Sofia, an unexplained crop circle was found. The frames are sent by an eyewitness from Ravno Field. The phenomenon was also seen on the popular Facebook page in Sofia in Details, which published the photo. It is believed that the crop circle is still there.” 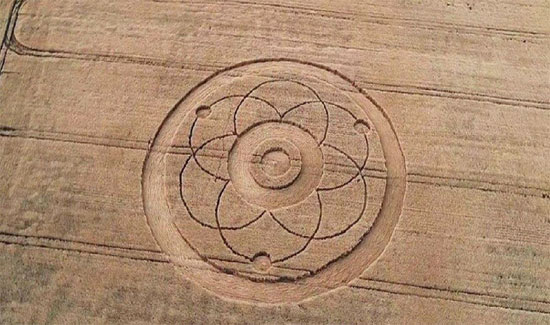 Various people sought to explain the recent crop circle phenomena. We offer below some of the opinions that appeared online.

Disclosure Process is Accelerating, Message from a Recent Crop Circle in Cley Hill

“We are ascending through a collective experience of disclosure that grows from within.” I was offered that understanding during a recent meditation with the help of my guardian angel. I was in a pretty high up place energetically in which it becomes difficult to mentally track what I am experiencing and being offered. It becomes challenging to even remember much of what I’ve experienced and, very often, I crash nap as some kind of “rewiring” is going on to really let it in beyond my conscious mind. All of this makes it challenging to write about and share what comes through, so I’m going to ask for help from my guardian angel to help me out here and clear through the fog.

I started this meditation/journey by focusing on and letting in the latest crop circle that appeared in England sometime during the night of July 17, 2017 to be discovered on July 18th. Of course, this date “pings” for us as it offers a sense of portal or gateway 7/17/17 that is a lot of seven energy. Rather than go Google what that means, I felt to check in with my spiritual angel about the crop circle, the message it offers us, and the significance of the date when it was offered to us. 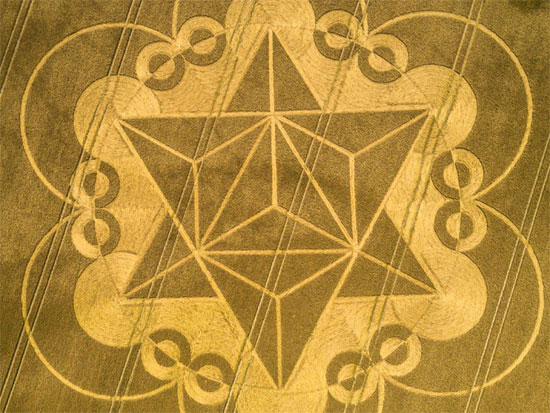 I felt myself swirling around in the various sacred geometric shapes offered in the crop circle and I really felt them and let them into my heart rather than tried to mentally understand them. I had a wood cutting of the flower of life figure on my third eye with an amethyst to help with this experience and a Metatron’s cube on my heart chakra with a rose quartz on top of it. I like the physicality of these shapes on my body and feel them much more this way in combination with the energy of the crystals. I haven’t read anywhere to do this, it’s just what has felt natural and good. Whatever works and doesn’t harm anyone is my sense about these things. No real rules in meditation or when connecting with guardian angel and higher Self guidance.

The pyramids in the crop circle felt like alchemy, change, death and rebirth, forces of change peaking up and coming through. They also felt like gateways that can be “activated” from within and of course represent the going upward of our consciousness as what happens during ascension. The Merkaba is the spirit light body, the vehicle to multidimensional travel and such a well-known symbol of the ascension process. When I felt the one in the crop circle, it was a collective Merkaba, one that is available and possible for all of humanity.

The collective Merkaba offers the sense of our multi-dimensional essence and aspects, including angelic aspects. The message came in strong then (fortified by the flower of life) that ascension is for all of humanity. Not just a select few choosing a higher timeline reality. Not just for those polarized toward love and light. It didn’t seem to mean that we need all of humanity in order to live New Earth in the Now as that is each of our individual choices towards love and not fear. Yet, the invitation seemed to be to remember that we are all one, so even when it feels like we are going a different way from so many souls in mainstream consciousness, on another, higher level, we could all go together, we are all invited to come along, and we are all ascending if even one of us is.

The symbols that look like eights actually turned into the infinity symbol, elongated and stretched out, seeming to offer an invitation into our Infinite Love and Infinite Awareness sacred human essence. The infinity shapes (six of them) are side by side with six circles. This felt like a representation of the Infinite Circle of Life that lives in each of us and for which we are connected and sourced from. Along with the infinite possibilities available to us all, again, the energy was of a collective invitation to experience this sense of the Infinite inside of each of us as the Source of our existences.

And then, Metatron said: “There’s my cube!” or a modified version of it anyway and seemed happy about this and surprised. I asked him then who offered this crop circle to us and he replied, “Some friends. And friends of friends” and then winked at me. I got the sense that the gift and message of this circle was not just from benevolent extraterrestrials who are waiting for us to be more ready as a collective to begin the disclosure and connection process, but also, humans who are in the “know” with the extraterrestrials and working with them toward this end. I’ve heard this called by David Wilcock as The Alliance, so it could be that.

The sense of humans and extraterrestrials working together was a sweet one. Metatron shrugged a bit at the awe these crop circles produce as, in another way, it’s fairly simple technology from an extraterrestrial perspective that creates them. Like that movie, The Gods Must Be Crazy, where the natives go crazy in awe over a coke bottle since they’ve never seen one, so we humans “go crazy” when presented with something in our current reality that is not explainable by current science or the prevailing worldview of five sense reality filtering. At the core of us lives the indefinable mystery for which we are made and long to return and a deep sense of curiosity gets triggered by “unexplainable” things like crop circles.

I like that we can be awed though and I felt how much love was in the offering of this crop circle too. The use of such obvious sacred geometry is like a bill board loudly announcing that the process of disclosure of extraterrestrial reality is accelerating and collective ascension is continuing to be underway in the now. The main energies I felt were hope, infinite beneficial possibilities, and a deep, abiding love for humanity spiced with an acute eagerness to begin the collective collaboration process that will change our lives for the better and for all of the galaxies too!

I feel that this crop circle is also an invitation for each of us to meditate on it and hear, feel, see the message from it that we are meant to receive. It could be deeply personal for you in this phase of your spiritual transformation or it could be more a collective message or vision, as I received.