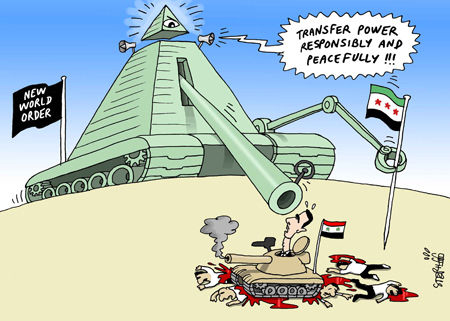 First of all, keep in mind that it was New World Order agents in Israel who vowed to destroy the moral and political order in Syria by saying explicitly that they prefer terrorists cells over Bashar al-Assad. This is not conspiracy theory; it’s not even a secret.

In 2013, Israeli ambassador Michael Oren told the Jerusalem Post that Israel would love to see Assad gone by any means. What if it involves supporting terrorist cells which slaughtered innocent men, women, and children? What if those terrorist cells blow up buildings and humanitarian organizations? So be it, said Oren. Oren explicitly said: “The initial message about the Syrian issue was that we always wanted [President] Bashar Assad to go, we always preferred the bad guys who weren’t backed by Iran to the bad guys who were backed by Iran.”

So New World Order agents in Israel were ready to suspend the moral and political order in order to achieve their essentially diabolical goals in Syria. NWO agents knew that “the bad guys” in Syria were terrorists. Oren added: “We understand that they are pretty bad guys. Still, the greatest danger to Israel is by the strategic arc that extends from Tehran, to Damascus to Beirut. And we saw the Assad regime as the keystone in that arc. That is a position we had well before the outbreak of hostilities in Syria. With the outbreak of hostilities we continued to want Assad to go.”

The plot thickens. The criminal syndicate in Israel wanted to take down the moral order in Syria, and they have invented virtually every lame excuse to get the job done: Assad killed innocent civilians; Assad is the “new Hitler” on the block; Assad used chemical weapons; Assad…
But when you sit down with any New World Order agent and start asking for evidence for their vacuous and prevailing claims, they start twitching and itching and getting uncomfortable. They would go round and round; they would repeat themselves and never address the fundamental issues.

Furthermore, they never bother to look at serious evidence – evidence that actually contradicts their prevailing vision. Russia’s envoy to the UN Vassily Nebenzia has declared that Russia possesses evidence showing that the very terrorist cells that both Israel and America have been supporting since the beginning of the Syrian war have actually used chemical weapons in Eastern Ghouta. Nebenzia stated: “According to information at our disposal, on March 5 (2018), Al-Nusra militants used chorine substance in Eastern Ghouta, which injured 30 civilians. All this is done to prepare the grounds for unilateral military actions against sovereign Syria.”

Nebenzia also emphasized that terrorist cells have attacked civilians and even hospitals. But not a single New World Order agent in Israel and America wants to take a look at this stunning remark and ask for evidence because New World Order agents obviously know that Russia will slam it in front of them. Nebenzia continued to say that the terrorists: “are constantly striking humanitarian corridors and checkpoints, including during the humanitarian pauses. They intensified the use of tunnels in order to provoke the Syrian military and the exits of those tunnels are in the areas of public buildings, first and foremost mosques, hospitals and markets.”

Russia, Iran and Assad are therefore engaged in a cosmic war against the criminal syndicate in Israel and America. The criminal syndicate has sent New World Order agents in Europe and America in order to deconstruct the moral order and destabilize any serious examination of the situation in Syria as well. Consider this: “The Council of the EU published a statement addressing fresh sanctions on Syria for chemical attacks against civilians; the memo is dated March 19 (2018) – the day when the foreign ministers of the EU member-states met in Brussels. The Council’s press service has already commented on the announcement, saying it was a technical error, and quickly removed it from the official website.” 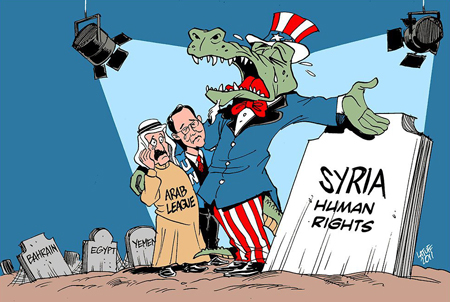 The Western world was essentially born out of moral and political order. So if a person happens to make an accusation, then he is obligated to present serious evidence for it.
If no serious evidence is presented, then one is justified in saying that the person is probably following an ideology – be it lucrative or diabolical or both. The criminal syndicate has been accusing Assad of using chemical weapons since the beginning of the Syrian war, but no one has actually presented serious evidence.

This again shows that we are not dealing with reasonable people here. We are dealing with a diabolical ideology which vows to create bloodshed by any means necessary. The criminal syndicate produces Zionism, which is, as Ayatollah Khomeini put it, part of “The Great Satan”. This “Great Satan”, said Khomeini, “has summoned its agents and instructed them to sow dissension among the Muslims by every imaginable means, giving rise to hostility and dispute among brothers in faith who share the belief in tauhid [unity] so that nothing will stand in the way of complete domination and plunder.”

The term “The Great Satan” is actually an apt description of the criminal syndicate, whose New World Order agents have been spreading colossal hoaxes and deliberate lies and deceptions in much of the world. For Khomeini, the criminal syndicate has been using America to achieve its diabolical goal: “The most important and painful problem confronting the subjugated nations of the world, both Muslim and non-Muslim, is the problem of America. In order to swallow up the material resources of the countries it has succeeded in dominating, America, the most powerful country in the world, will spare no effort. America is the number-one enemy of the deprived and oppressed people of the world.

There is no crime America will not commit in order to maintain its political, economic, cultural, and military domination of those parts of the world where it predominates. It exploits the oppressed people of the world by means of the large-scale propaganda campaigns that are coordinated for it by international Zionism.
By means of its hidden and treacherous agents, it sucks the blood of the defenseless people as if it alone, together with its satellites, had the right to live in this world. Iran has tried to sever all its relations with this Great Satan and it is for this reason that it now finds wars imposed upon it.”