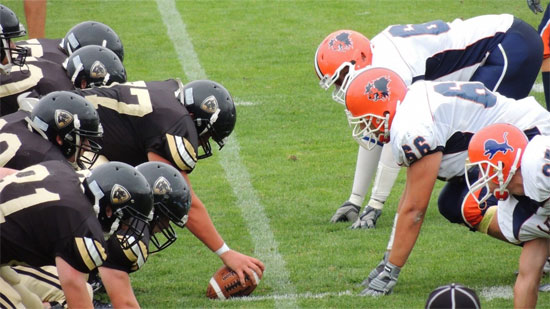 “So long as they (the Proles) continued to work and breed, their other activities were without importance… Films, football, beer and above all, gambling filled up the horizon of their minds. To keep them in control was not difficult.” – George Orwell, 1984

Few things in American culture exemplify the fractured status of the collective psyche quite like the popularity of the National Football League (NFL). The NFL has become a de facto symbol of American freedom, while in reality it performs the function of the Roman circus, keeping the distracted from the extortion and crimes of state.

The NFL is sponsored by major corporations and by the U.S. Armed Forces. The games played in multi-billion dollar subsidized stadiums have become patriotically charged events, where spectators conflate fighting for freedom with watching games for entertainment. Men are told to pick a team and go to war for that team. Fans of different teams are mortal enemies. Military planes conduct fly-bys overhead, and participants are apparently expected to stand for the national anthem.

The euphoria of football has political value. The sport is an important program of deflection and subjugation of the natural male will to protect community and to fight against foe if necessary. This natural drive is captured and projected onto the tightly controlled images of the league, its teams, and its players. Games are presented as life and death struggles, while real-life issues are downplayed in favour of this never-ending drama.

Author William Cooper talked about the importance of football and other major league sports in a society where men must be pacified in order for the government to continually abuse the populace. Cooper’s perspective is that such enormous investment in the sport as a national pastime serves to distract the people from important social issues, deflecting blame away from the oligarchy for its contributions in destroying real freedom. When men’s passions are levied on sport, they pay little attention to the workings of the state, and have no gumption to resist creeping tyranny, says Cooper:

“When a hundred and fifty of the most powerful men and women in the world can meet in secret… to plot the fate of billions, and nobody even cares about it, but six football players go to lunch together, and it’s in the headlines across the country, you have a reflection of the society in which that exists. And it is a sick, sick society that is doomed to self-destruction.”

And now, as “take a knee” protests have swept the US nation, the NFL’s image has just been shattered in a catch-22 of brainwashing and cognitive dissonance. What originally started as a statement against the very real and destructive issue of police brutality has become a hysteria-fuelled social movement and front page news. People are destroying thousands of dollars’ worth of team branded merchandise to demonstrate that complaints against the state will not be tolerated.

The president has even chimed in, adding fuel to the fire and doubling down on the notion that the National Football League is first and foremost a patriotic organization. In this country, and in this sport, the government is not to be criticized. Not for brutalizing the citizenry with out of control police, or anything else.

In a society as rigidly controlled by a monolithic, top-down, know-it-all organization like the state, the archetypal energy of the male is manageable only by suppressing man’s natural drive to protect his community. This is how the elite have controlled men since the days of the Roman Empire.

When President Eisenhower left office, he warned us that the U.S. was changing under the pressures of a new world, and that a military industrial complex had emerged which would pose a sincere menace to a free society. Fast forward almost 60 years and his words are quite prescient:

“Now this conjunction of an immense military establishment and a large arms industry is new in the American experience. The total influence—economic, political, even spiritual—is felt in every city, every Statehouse, every office of the Federal government.

In the councils of government, we must guard against the acquisition of unwarranted influence, whether sought or unsought, by the military-industrial complex. The potential for the disastrous rise of misplaced power exists and will persist. We must never let the weight of this combination endanger our liberties or democratic processes. We should take nothing for granted. Only an alert and knowledgeable citizenry can compel the proper meshing of the huge industrial and military machinery of defence with our peaceful methods and goals, so that security and liberty may prosper together.”