The government is spying on most Americans through computers, phones, cars, buses, streetlights, at airports and on the street, via mobile scanners and drones, through our credit cards and smart meters, televisions, dolls, and in many other ways.

At the end of June, ZDNet reported that the NSA uses a trick to get around the few flimsy American laws on spying – they shuttle internet traffic overseas so they can pretend they’re monitoring foreign communications.

According to the new analysis, the NSA has clandestine means of “diverting portions of the river of internet traffic that travels on global communications cables,” which allows it to bypass protections put into place by Congress to prevent domestic surveillance on Americans.

One leaked top secret document from 2007 details a technique that allows the intelligence agency to exploit the global flow of internet data by tricking internet traffic into traveling through a set and specific route, such as undersea fiber cables that the agency actively monitors. 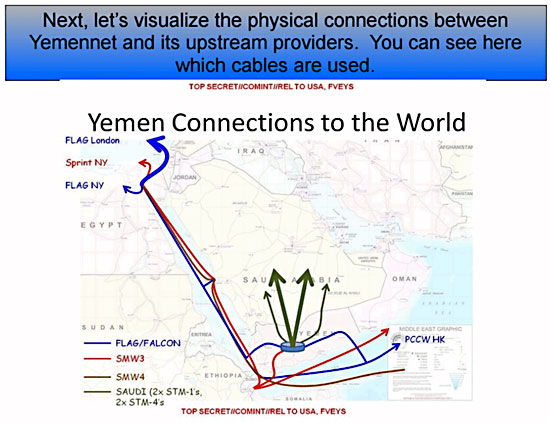 The document’s example noted Yemen, a hotspot for terrorism and extremist activity. It is difficult to monitor because the NSA has almost no way to passively monitor internet traffic from the cables that run in and out of the country. By shaping the traffic, the agency can trick internet data to pass through undersea cables that are located on friendlier territory.

Goldberg’s research takes that logic and focuses it on US citizens, whose data and communications is out of bounds for the intelligence agencies without a valid warrant from the surveillance court.

The government only has to divert their internet data outside of the US to use the powers of the executive order to legally collect the data as though it was an overseas communication.

Two Americans can send an email through Gmail, for example, but because their email is sent through or backed up in a foreign data center, the contents of that message can become “incidentally collected” under the executive order’s surveillance powers.

Thomas Drake – one of the top NSA executives, and Senior Change Leader within the NSA – blew the whistle on this deceptive practice more than a decade ago.
For his troubles, Drake was prosecuted under the Espionage Act and literally framed by the government.

Drake also notes that the government is storing for the long-term just about everything they’re collecting.
But don’t worry … the government would never think of doing anything bad with the information.

The Hole in the Pharmaceutical Solution to Ulcers & the Natural Answer