The Hole in the Pharmaceutical Solution to Ulcers & the Natural Answer

Recently, a disturbing study was published on the leading class of ulcer medication. The study found that proton pump inhibitors erode your mind while suppressing gastric symptoms in your body.

Proton pump inhibitors (PPIs) include popular drugs like Prilosec, Nexium and Prevacid. They are used for ulcers, gastroesophageal reflux syndrome and indigestion because they lower the amount of acid produced in the stomach. But that’s a problem, because stomach acid is crucial for digestion and for protecting you from food-borne and environmental bacteria, viruses and other microbes that can cause infection. In the past, they have been associated with several problems, including increasing your risk of pneumonia (World Journal of Gastrointestinal Pharmacology and Therapeutics 2011; 2:17-26; Expert Review of Clinical Pharmacology 2012; 5:337-44), interfering with calcium absorption (The American Journal of Medicine 2005; 118:778-81) and causing vitamin B12 deficiency.

But this recent study of 73,679 people who did not have dementia when the study started found that the ones who took PPIs had a 44% increased risk of dementia compared to the ones who weren’t taking the drug (JAMA Neurology 2016; can be read here).
This is not the first time an ulcer medication has been linked to dementia. An earlier study found that continuous use of the histamine-2 receptor antagonists, like Pepcid, Zantac and Tagamet, increases the risk of cognitive impairment by a shocking 242% (Journal of the American Geriatrics Society 2007; 551248-53). 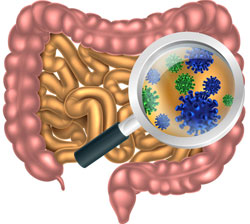 Dementia, kidney disease, pneumonia, but that’s not all. A just published study of how diet and drugs affect the intestinal microbiome – the balance of health affecting microorganisms in your intestine – found that, among the many drugs that negatively affect your microbiome, PPIs have an especially strong negative impact (Science 2016; 352 (6285):565). Research has linked PPIs to osteoporosis and… heart attack! Using PPIs for 7 or more years is associated with a 92% increase in the risk of osteoporosis related fractures. After 5 years, there is a 62% increased risk specifically of hip fractures (Canadian Medical Association Journal 2008; 179:319-26). Women who used PPIs for only 2 years in a study of 79,899 postmenopausal women had a 35% greater risk of hip fracture: the risk was especially great for smokers. When the researchers added this study to 10 others in a meta-analysis, they found a 30% increased risk of hip fracture with PPI use (British Medical Journal 2012; 344:e372).

A study published in 2016 concluded that PPIs increase your risk of heart attack by 16% while doubling your risk of dying of a heart attack compared to people not on PPIs (Public Library of Science One 2015; can be read here).
Imagine what would happen if a medicinal plant or vitamin used for ulcers caused dementia, heart attack, kidney disease, osteoporosis and pneumonia! But if Big Pharma medicine does that, the public is kept in darkness, and doctors keep making money.

The amazing thing is that there is a medicinal plant that beats these drugs for ulcers while being perfectly safe. A special form of licorice root called deglycyrrhizinated licorice, or DGL, is the best ulcer healer there is. Unlike the drugs, licorice heals the ulcer by improving the protective lining of the intestines. It protects them from the acid instead of reducing the needed acid.

Licorice has been proven to be as or more effective than ulcer medications in several head-to-head studies. In a study of 100 people with ulcers, 760mg of DGL 3 times a day was as effective as Tagamet (cimetidine) (Gut 1982; 23:545-51).
When 874 people with ulcers were given either DGL, Tagamet or an antacid, 91% of their ulcers healed within 12 weeks, with no significant difference between the treatments. But the DGL came out on top because only 8.2% had relapses compared to 12.9% of the Tagamet group and 16.4% of the antacid group (Irish Medical Journal 1985; 78:153-6). 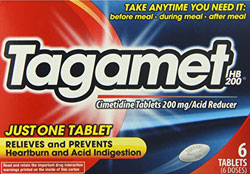 Endoscopic examination of a group of 32 people with ulcers revealed that DGL healed the mucosa and, in most cases, returned it to normal.
Several other studies have also confirmed licorice’s powerful ability to heal ulcers (Journal of the Association of Physicians of India 1978; 26:811-4; Lancet 1982; 2:817).

DGL proved to be significantly better than placebo at eliminating H. pylori in a 60 day study of 100 people with H. pylori (Evidence-Based Complementary and Alternative Medicine 2013; 2013:263805).

Herbal authority Rudlf Fritz Weiss, MD says there is no remedy, including drugs, more tailor-made for ulcers. He says that chamomile addresses all the hallmarks of an ulcer: spasm, inflammation and ulceration. Chamomile protects you against ulcers by soothing and healing the protective lining of the gastrointestinal tract. It also contains a flavonoid called apigenin that inhibits H. pylori (Arzneimittel Forschung 1995; 45:697-700).

Some of the earliest research on natural treatments for ulcers focused on cabbage juice. As early as 1949, a study of 13 people with ulcers had shown that fresh cabbage juice healed ulcers remarkably quickly: healing took only 7-10 days (California Medicine 1949; 70:10). Several other studies have also demonstrated the effectiveness of cabbage juice (Lancet 1954; 2:1200; Gazette Medicale De France 1965; 72:1992-3; Voprosy Pitaniia 1979; 29:29-33; Journal of the Norwegian Medical Association 1986; 106:693-4). Cabbage’s ability to heal ulcers may come from its high glutamine content. When a study compared glutamine to conventional therapy, the glutamine won. Glutamine completely healed ulcers in 22 out of 24 people in only 4 weeks (Texas State Journal of Medicine 1957; 53:840-3).

The newest medicinal plant for ulcers is curcumin, which is no surprise because curcumin seems to be proving to be the newest natural help for a wide range of complaints. In this new study, 60 people with ulcers who were positive for H. pylori added either a placebo or a low dose of 500mg of curcumin a day. At the end of the 4 week study, although the curcumin did not seem to benefit H. pylori infection more than the placebo, it was significantly better at alleviating the symptoms of the ulcers. The people taking the curcumin had significantly better improvement on total symptoms according to the Hong Kong dyspepsia index (HKDI). They also had significantly greater improvement specifically in upper abdominal dull ache, stomach pain prior to meals and belching. At the end of the study, 27.6% of the curcumin group had no dyspepsia versus only 6.7% of the placebo group: a significant difference. The researchers concluded that adding curcumin to standard therapy for peptic ulcers significantly improves symptoms but not elimination of H. pylori. It would be interesting to see what a more typical larger dose of curcumin would do (Drug Research (Stuttgart) 2016; 66(8)444-448).

The great wound healing mineral zinc also heals ulcers (The Medical Journal of Australia 1975; 2:793-6). Aloe Vera (The Journal of the American Osteopathic Association 1963; 62:731-5) and nettle (Ethopharmacology 2004; 90:205-15) have all been shown to help. Peppermint and ginger may also help. Soothing demulcents like slippery elm and marshmallow can also help. 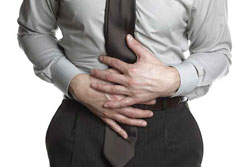