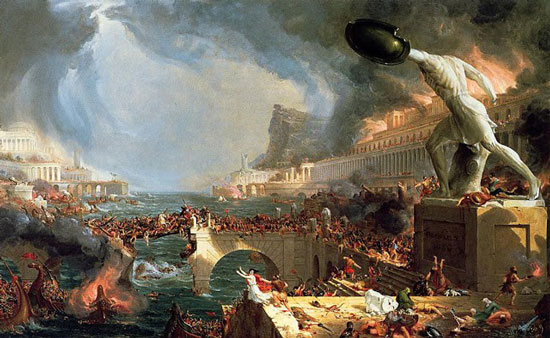 Are you worried about the society you live in today? If not, well, maybe you should be.

Just as civilizations fell before, our society may be headed for collapse. With the right ingredients, the western world may fall prey to its own devices and end life as we know it.

The chilling part is we are seeing some of the same signs that occurred right before the fall of the Roman Empire.

Researchers say: “Two important features appear across societies that have collapsed. The stretching of resources due to the strain placed on ecological carrying capacity and the economic stratification of society into Elites and Masses.”

Basically, when society is unequal, collapse is almost inevitable. While the upper class consumes way too much, the commoners deal with famine. There are limited resources for the working class.

To compound things, since the elite do not have to work, they are unaffected by this issue. The upper class continues to consume unequally making the issue grow larger and larger, moving toward a collapse.

As you can easily understand by this, resources continue to be used up. Technologies designed to conserve energy use energies in the process.

An increase in fuel efficiency may seem like a good thing, but it also puts more vehicles on the road, heavier vehicles and at higher speeds.

This increases energy usage and cancels out the gains desired by fuel efficiency in the first place.

This is all interesting, but how do we come to these conclusions about the collapse of society?

Human and Nature Dynamical (HANDY) factored data – used by researchers – such as birth rates, class and resources to generate a mathematical equation showing our outcome.

The study said: “A brief overview of collapses demonstrates not only the ubiquity of the phenomenon, but also the extent, to which advanced, complex and powerful societies are susceptible to collapse.”

The doomsayers are already working overtime with this information. Although we are currently setting the stage for disaster, we can change our future predicament. According to NASA, the main keys to survival revolve around economic equality and preserving resources.

Collapse can be avoided if depletion of nature is reduced and resources are used wisely and equally. Although empires have fallen which mirror our lifestyles today, there is time to change the way we live.

There is always hope for tomorrow, if we make the right decisions today.

Smoking causes up to 40% of cancer deaths in the US… so why are cigarettes still sold by pharmacies? This is a legitimate question