Prominent Ufologist Stanton Friedman: «Aliens are here and will quarantine us»

Aliens have visited Earth multiple times and will quarantine the entire human race, according to incredible claims by a leading scientist.
Nuclear physicist Stanton Friedman said extraterrestrials have repeatedly visited our planet but have no intention of revealing themselves just yet. 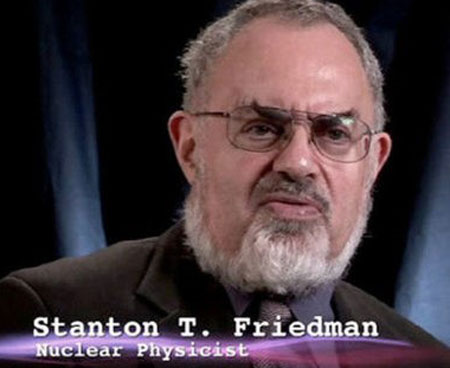 The Canada-based expert said there “was not a shadow of a doubt” aliens had come to Earth but that it is being covered-up by governments and security services around the world.

The 82-year-old is a leading figure in the ufologist community and has previously worked on numerous highly classified projects for American aerospace corporation McDonnell Douglas.

He told Daily Star Online: “We have enough to prove without a shadow of a doubt that Planet Earth is being visited [by aliens]. This is kept from people because who would want the world in upheaval? There would be mass panic and distress.
If they (the aliens) want to make themselves known, it’s easy – they will.”

Friedman believes there is a wealth of evidence that aliens exist, citing examples where the CIA has released redacted documents of UFO sightings.
But the ufologist thinks the reason they have remained hidden is to eventually quarantine humans on Earth and stop them from attempting to colonise space.

His comments came as billionaire Tesla founder Elon Musk continues towards his plan to build a giant civilisation on Mars in the next couple of decades.

As well as not causing panic among the general public, Friedman thinks reports of crashed spaceships and UFO sightings are also hushed up for another reason.

He said: “The first country to replicate [alien] technology will rule the roost if they can build it. It’s political too – the US says ‘we are ready to put out anything if the Russians don’t or the Chinese don’t’.”

Friedman, who has written extensively on aliens and UFOs, has described this culture of secrecy as the world’s “Cosmic Watergate” – a reference to the President Nixon cover-up scandal in the 1970s.

Many ufologists think Friedman is correct – just not in the way that he thinks. They believe humanity is being kept in the dark about the alien reality not only because of the reaction that it would cause, but because we are useful vehicles for their ultimate aims, and we mustn’t know about that. There is probably no moral compunction on the part of our “friends” out there to let us do (or not do) certain things, unless it would endanger our viability as a “human resource”.

As for being in some kind of quarantine: sure. We’ve been kept in a quarantine of awareness for millennia. But maybe all that’s about to change.