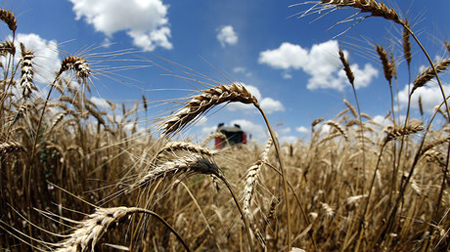 Russian President Vladimir Putin has vowed to feed half the world with this year’s record-breaking non-GMO organic grain harvest in Russia.

Putin’s decision to feed half the world could not have come at a more critical moment in history. New evidence shows that the DNA methylation process used by Americans to create genetically modified (GMO) foods accumulates in GMO maize – and many experts believe this is causing de-masculinized boys and young men to lose as much as 50% of their sperm.

The Anti-Christ demonic globalists controlling America have for decades engaged in an all-out war upon humanity. Their worship at the altar of “overpopulation” has seen these monsters calling for nothing less than outright genocide with their views being summed up with the words: “Too much population? No problem… Let’s just pick some groups that aren’t contributing much to the global economy and kill them off. There’ll be fewer mouths to feed, more land to grow food for the rest of us, and more water to irrigate the crops.”

Knowing that a superpower nuclear conflict would help them achieve their genocidal goals against humanity, these demonic American globalists, aided by their elite mainstream media propagandists, have long kept global tensions needlessly smoldering to point of erupting into war – while at the same time they’re operating on a path to achieve their global depopulation goals by altering what it is to be human.

In their non-nuclear war scheme to depopulate the world of “life unworthy of life”, these demonic globalist American elites began changing what it is to be human – and that began with their all-out war on what it means to be male and female – with their intended goal of abolishing the sexes of humanity so as to create a gender-neutral world population unable to reproduce.

Like a massive advertising campaign for a new product, these demonic globalist Americans have saturated nearly the entire world through their vast news, corporate and entertainment industries with their “new human” ideals – most specifically by their promoting of homosexual values and lifestyles, while at the same time destroying our world’s historic religious and family values.

Knowing that mass media social campaigning alone would not achieve their “new human” goals for global depopulation, these demonic globalist Americans then turned to science – most particularly by their massively funding the US-based multinational agrochemical and agricultural biotechnology corporation Monsanto –whose decades-long history of toxic contamination has, nevertheless, allowed it to dominate America’s food chain with ruthless “harvest of fear” tactics as it pertains to its genetically modified foods – and whose GMO children’s breakfast cereals begin the de-masculinization of young boys – but whose products are banned nearly everywhere else in the world.

Being kept from the American people, who with every meal are turning their children, and themselves, into gender-neutral “new humans”, is that meal-derived DNA fragments from GMO foods carry complete genes that can enter into the human circulation system through an unknown mechanism – and is why the globally esteemed Canadian genetics Doctor-Scientist David Suzuki warned that what these demonic globalist Americans are doing can only be described as a “massive genetic experiment”.

To the vilest part of this “massive genetic experiment” being conducted by these demonic globalist Americans by their forcing GMO foods upon unsuspecting peoples to create their gender-neutral “new humans”, was revealed, in 2016, by the US National Center for Biotechnology Information (NCBI) whose report titled Levels Of DNA Methylation And Transcript Accumulation In Leaves Of Transgenic Maize Varieties stunningly showed differences in DNA methylation patterns in all GMO varieties of food, as well as in transgene transcript accumulation levels.

DNA methylation is a process by which methyl groups are added to the DNA molecule – while methylation can change the activity of a DNA segment without changing the sequence – and when located in a gene promoter, DNA methylation typically acts to repress gene transcription – with DNA methylation, also, being essential for normal human development and is associated with a number of key processes including genomic imprinting, X-chromosome inactivation, repression of transposable elements, aging and carcinogenesis. 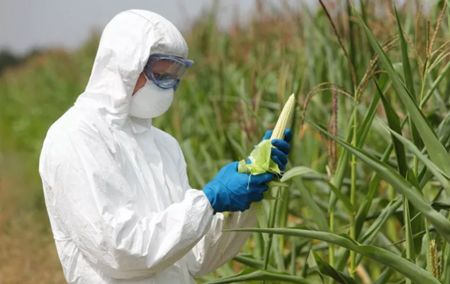 Most critical, however, to know about DNA methylation, is its vital role played in human sexuality, and as a 2015 scientific research document stated:
“Differences in male and female rodent sexual behaviors are programmed during brain development, but how exactly this occurs is not clear. In the preoptic area (POA) of the brain – a region necessary for male sex behavior – the female phenotype results from repression of male-linked genes by DNA methylation.”

There is very little known about how the brain is masculinized, and even less about how it is feminized, even though the question has been studied for more than 50 years.
Suspecting that these demonic globalist Americans, through Monsanto GMO research, had discovered a method to repress male-linked genes by DNA methylation, and by extension were now feeding people GMO foods to create their gender-neutral “new humans”, Russian experts became alarmed, in 2016, when the US National Center for Biotechnology Information shockingly admitted that even they didn’t know what was going on. While warning in their scientific report about how abnormal DNA methylation levels were appearing in GMO corn, they further stated: “GM events are usually required for approval, but these are rarely disclosed or they are considered insufficient.”

With Monsanto being able to “rarely disclose” their GMO “event discoveries”, and leaving out entirely from their scientific reports what they “considered insufficient”, Russian experts began looking for other evidence that these demonic globalist Americans had, indeed, found a DNA methylation process to repress male-linked hormones. Their evidence exhibited in the peoples consuming GMO foods drastically falling sperm counts, childhood obesity and gender confusion – all of which were found to rampant in the United States – thus causing Russia, in 2016, to institute a ban on growing, or even consuming GMO foods and crops on its territory.

With one of the longest-standing tricks of the American corporate trade being to produce an item that is dangerous, breakable, or soon to be obsolete, and then produce another item that will supposedly remedy the defect, this is exactly what is happening with Monsanto’s GMO crops. As they become resistant to Roundup, and/or other toxins designed to keep them bug or disease-free, they then come up with new herbicides for the farmer to apply, thus creating a never ending cycle of destruction that only profits them.

Doing the opposite of what these demonic globalist Americans are doing, though, Russia went back to planting crops as they’ve done for thousands of years, with the goal of becoming the world leader in organic food exports, and whose stunning success has surpassed all expectations with Russia now reporting its largest grain harvest in history that’s able to feed half the world.

Anyone believing that these demonic globalist Americans fearing overpopulation would be celebrating Russia’s historic success in showing the world that it can live without Monsanto and its GMO crops creating gender-neutral “new humans”, would be wrong. As always, Russia is now being blamed by the Monsanto funded Iowa State University for littering the US with articles and links casting genetically modified organisms in a negative light in an effort to discredit American agricultural practices and to portray Russian crops as an “ecologically cleaner” alternative to GMO foods. However, they don’t bother to mention that natural organic foods are, indeed, healthier to the human body, as opposed to the “massive genetic experiment” they’re supporting.