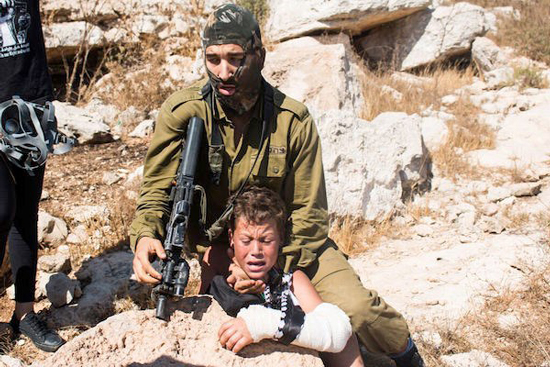 Unlike in Syria, there is documented evidence of civilian murder, war crimes, and use of chemical weapons use in Israel, yet the US chooses to remain entirely silent and, in fact, voices their outspoken support for the regime.

On April 14, the United States led a coordinated attack – along with French and British forces – on the sovereign country of Syria. Western nations have ganged up on and attacked this sovereign state, launching countless missiles, hitting civilian targets, and all of it was based on alleged crimes for which they had no evidence.

After the strikes, the French and British governments released the supposed evidence they had to justify the act of war carried out by allied nations in Syria. The reports admitted to not having any actual intelligence and the “evidence” was based on “open source” information widely available on the internet.
These open source accounts were little more than videos and testimonies from groups such as the White Helmets, who have been known to create fake videos, support terrorists, and much more.

To those paying attention to Syria, the White Helmets aiding or even participating in terrorism should come as no surprise and the retaliatory nature of these strikes plays right into the hands of terrorists. Indeed, political analysts are referring to the United States as the “ISIS Air Force”.

To put this into perspective, the United States, Britain, and France launched a coordinated act of war on a sovereign country, based on crimes for which they had almost no evidence, which could potentially be the catalyst for World War 3, and all of it was carried out under the ostensible auspices of “humanitarianism”.

While there is a tiny chance that Assad did actually release chemical weapons on his own people in order to drive out the remaining insurgents from Douma, it goes against all logic as it would provoke the actions which are now taking place, ensuring the rest of the country is invaded and turned to rubble by US-made missiles.
“The way the people that perpetuate these false flags [sic] say that Assad is gassing his own people, at the same time, he’s winning the war and the people are flocking back in to go to the territories that he has returned to the government of Syria”, explained former Congressman Ron Paul. “But, nevertheless, he’s out there gassing his own people, which makes no sense whatsoever and fewer and fewer people are believing this.”

To illustrate just how grotesque of a sham the attacks on Syria actually are, one need only look at the current atrocities being carried out by Israel and the utter lack of concern, media coverage, and political attention it is receiving.
As TFTP has reported, dozens of Palestinians have been killed and nearly 1,300 have been wounded by live fire and rubber bullets from the Israeli Military, just in the end of March and begging of April, as protests have increased near the border, according to the Health Ministry in Gaza.

Palestinians claim that the protests are a symbol of their desire to speak out again Israel’s occupation of their land and control over their resources. Samer, 27, told the Jerusalem Post that he risked his life to join in the protests because he wanted to take a stand.
“Israel took everything from us, the homeland, freedom, our future” Samer said. “I have two kids, a boy, and a girl, and if I die, God will take care of them.”
While Israel has falsely claimed that every man or teenage boy who participated in the protests was a “militant” for Hamas, and deserved to die, there was one civilian death that was particularly notable.

Yaser Murtaja, a Palestinian photojournalist, was wearing a jacket that clearly said “PRESS” when he was shot in the chest and killed by an Israeli sniper on April 7. As The Intercept noted: “Either the Israeli sniper could not clearly see who was in the rifle scope – in which case the claim that the use of live fire is precise is shown to be untrue – or the soldier intentionally fired at a journalist, which is a war crime.”

Israel has also been caught on video murdering innocent unarmed people and laughing about it.

Shocking footage also emerged online highlighting this brutal treatment of the Palestinian people by the Israeli government. In the video, police are seen throwing a stun grenade at a couple who is running away from them, holding a baby.

The video was taken by an activist for the Israeli human rights group, Yesh Den. In the short clip, the couple is seen fleeing to their home in the village of Burin as four Israeli officers approach them from behind. In spite of the couple posing no threat and holding a baby, one of the officers throws a stun grenade right at them.

But innocent journalists, babies, and random strangers aren’t the only ones being attacked by the state of Israel. The country is also reportedly actively spraying chemical weapons, in the form of toxic herbicides over the crops of innocent farmers.

While Israel claimed that it was just using its planes to get rid of weeds and extra grass along the border with Palestinian territory, Palestinian officials have criticized the interference.
“These chemicals cause damage to agricultural crops and harm farmlands. Israel has no right to spray herbicides on Palestinian farmlands”, Nizar al-Wahedi of the Palestinian Agriculture Ministry told the Anadolu Agency.

Unlike in Syria, we have documented evidence of actual murder, war crimes, and chemical weapons use and the US is not only silent on these atrocities but outspoken over their support for the state of Israel.

To be clear, no one here is advocating for the same action taken on Syria to be carried out on the state of Israel. Instead, this comparison is meant to expose the rife hypocrisy and the ulterior motive behind the war in Syria.

The fact is that conflicts in these countries are none of the United States’ business and pledging US tax dollars and lives to intervene in them is not only unconstitutional, but it creates far more conflict than already exists.

As TFTP has reported, the war in Syria has been planned for years and it has nothing to do with humanitarian purposes. We would all do wise to remember the false claims of WMDs in Iraq and the horror story created by US intervention thereafter. Indeed, most conflicts throughout US history have been based entirely on lies, propaganda, and false flags.

If Your Cell Phone and Other Devices Were Making You Fat, Would You Cut Back on Using Them?