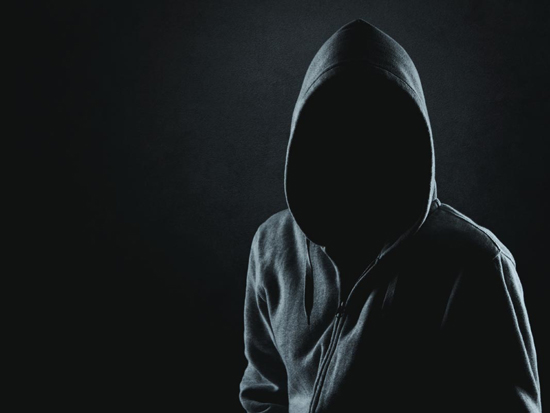 QAnon has repeatedly referred to the movie the Sum of All Fears in posts dating back to November 2017 that suggest the Deep State is involved in an effort to foment a nuclear false flag attack on the United States. In a recent post QAnon explicitly says that a nuclear weapons facility being secretly assembled in Syria would use uranium that could be linked to Russia.

QAnon revealed that after a false flag nuclear attack on US territory, the uranium would be traced back to Russia, and the stage would be set for forcing the US military to launch a retaliation that would precipitate World War III.

Before examining QAnon’s posts, it’s worth repeating that the consensus of many analyzing his/her posts is that QAnon represents a group of very senior military intelligence officials working with the Trump Administration. According to Dr. Jerome Corsi, it was a group of three military generals that approached Trump to run for President in 2015, in order to help the US break free from Deep State control and prevent covert efforts to orchestrate World War III.

QAnon’s posts reveal the inner thinking of senior military intelligence officials connected to the Trump White House. The posts provide the general public a unique opportunity to fathom what is really happening in the rarefied world of military intelligence and special operations, despite mainstream media efforts to distract the public through fake news reports.

In the movie The Sum of All Fears, the US and Russia come to the brink of war when a nuclear device is detonated in the city of Baltimore. The nuclear attack is blamed on Russia and the world stands on the brink of World War III until the movie’s main protagonist, a CIA analyst, shows the uranium used for the device was in fact a stolen US nuclear device.

Here’s what QAnon wrote on April 30: 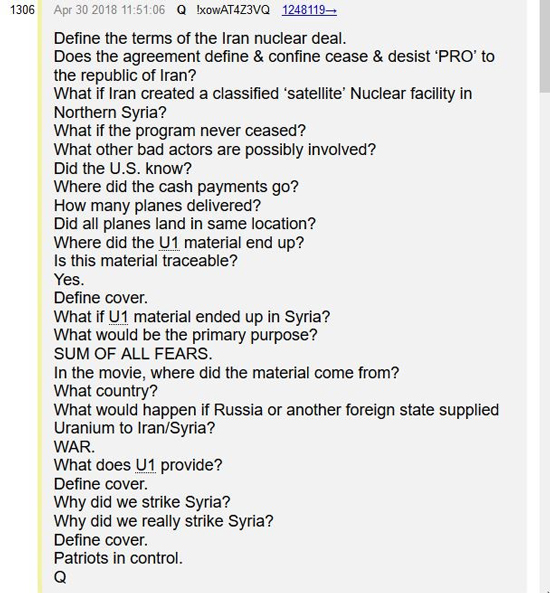 The term “bad actors” is a reference to rogue operators that are linked to the Deep State, who enabled this nuclear facility to be secretly assembled. Presumably, Iran’s and Syria’s leadership was being tricked, manipulated or blackmailed, into building this secret nuclear facility that would be controlled by shadowy individuals linked to the Deep State.

It’s worth pointing out that QAnon has repeatedly said that the Deep State involves a global Satan worshiping group linked to the Rothschild family. This group uses its vast wealth and occult power to compromise politicians and elites around the world, which are subsequently controlled to do the Deep State’s bidding.

QAnon goes on to say that the nuclear material being used in this satellite Nuclear facility in Syria had been arranged by the Deep State:
“Where did the U1 material end up?
Is this material traceable?
Yes.
Define cover.
What if U1 material ended up in Syria?
What would be the primary purpose?
SUM OF ALL FEARS.”

Here QAnon asserts that the Uranium One (U1) deal reached between the Obama administration and Russia back in 2009, when Hillary Clinton was Secretary of State, was designed to supply Russia with uranium that could be traced back to the US. The Deep State plan was to use the U1 uranium at the secret nuclear facility in Northern Syria, to build a nuclear device that would be detonated in the US.

The next part of the April 30 post says:
“In the movie, where did the material come from?
What country?
What would happen if Russia or another foreign state supplied Uranium to Iran/Syria?
WAR.
What does U1 provide?
Define cover.”

In the movie the uranium came from a US source. In the secret Iranian nuclear facility in northern Syria, the U1 uranium sold to Russia by the Obama administration, provided a means of incriminating Russia. According to QAnon, this would have led to WAR – a military retaliation by the US covertly planned to escalate to World War III.

QAnon’s next reference is important for understanding the real target of the US, French and British military strikes into Syria on April 14:
“Why did we strike Syria?
Why did we really strike Syria?
Define cover.
Patriots in control.
Q.”

QAnon is telling us that the chemical weapons justification used by President Trump to authorize the strike was a charade, a cover. The US military was really targeting the secret nuclear facilities ostensibly controlled by Iran, but were in fact Deep State assets.

This would help explain why the Russians stood down in the US coalition attack on its ally, Syria. Russia was briefed in advance, and very likely approved the plan to take out the secret Iranian nuclear facility which it could not do itself given its alliance with Iran in the Syrian Civil War.

Furthermore, in the movie, the actors involved in the false flag attack is connected to a secretive neo-Nazi group. In a March 10 post, QAnon also links the effort to frame Russia in a nuclear attack on the US to a secretive Nazi group. 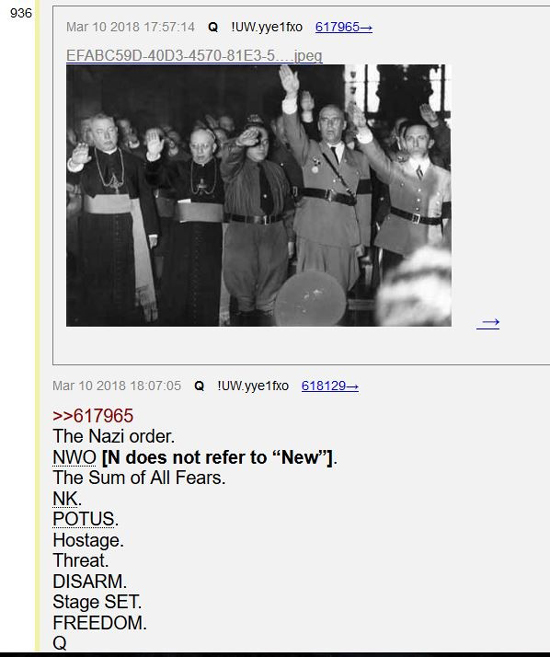 The failed false flag attack on Hawaii was therefore the real reason for North Korea’s change of heart and decision to cooperate with President Trump. As discussed in a previous article, the U.S. military shot down the ballistic missile intended to frame North Korea, and stood down its forces rather than retaliate against the North Koreans.

This is the meaning of the stage being set for “FREEDOM” for North Korea. Apparently, the same thing is happening now in Syria and Iran, by the Deep State’s Iranian satellite nuclear facility being destroyed in the US military strike.

The picture that is emerging from QAnon’s April 30, March 10 and other posts is that the repeated references to The Sum of All Fears movie is revealing a secretive effort by the Deep State to contrive a nuclear war through a false flag attack on the US.

If we are interpreting QAnon’s posts correctly, then it is clear that The Sum of All Fears movie was a Deep State initiative to hide the truth in plain sight, which is a well-established occult principle.

QAnon is telling us that there is a global network of Deep State actors who are Satan worshipers that work closely with a secretive Nazi group that survived World War II. This Dark Alliance is intent on fomenting a catastrophic World War. Recent events in Syria and North Korea, firmly point to Presidents Trump and Putin secretly cooperating to put an end to these evil Deep State plans.