Recent Study: Almost All Vaccines Contaminated with Toxins and Linked to Side Effects

Once again, we must look outside of the United States to find research and news regarding vaccine safety. A recent study published in Italy, which is of course being censored in the U.S. mainstream media, reveals that vaccines currently used to inject America’s children are contaminated with toxic material not revealed as ingredients in the manufacturer’s product information leaflet.

Proponents of vaccines will undoubtedly be quick to point out that the population is exposed to very small amounts of toxins in our environment on a daily basis, and that this study is nothing to worry about.

However, that is not the case at all. For the toxins we encounter naturally in our environment through our digestive or respiratory system, we have natural immune fighting capabilities to deal with them and eliminate them from the body. Not so with toxins injected directly into the body, which bypass these natural defense mechanisms.

Make no mistake about it: this study is BIG news and affects the health and lives of everyone receiving vaccines. 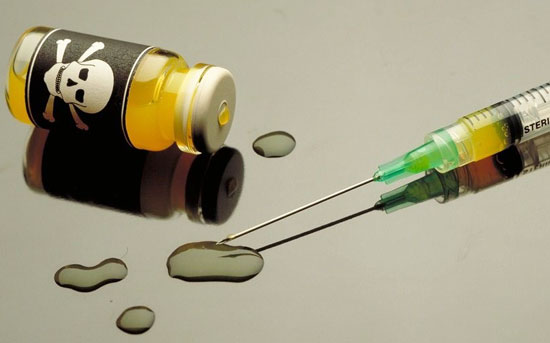 The ‘safe and effective’ vaccine narrative is crumbling before our eyes.
For years, scientists, health professionals at every level and parents have chipped away at the false narrative’s shaky foundations. Looking back many will wonder why governments gave vaccine manufacturers blanket protection from any damage their for-profit products caused. Many will wonder why laws were passed to force the unsafe products of a private company on our children. And many will wonder why parents, doctors and nurses were persecuted for raising valid questions about the damage and injuries they witnessed from the vaccines.

Historians will question how establishment medicine and government marched lockstep to the idea of settled vaccine science when there were never long-term studies of vaccinated vs. unvaccinated populations, no studies of the vaccine schedule as a whole, no long-term studies of health outcomes for individual vaccines, and a complete failure – or a willful ignoring – of investigation into vaccine-injury.
Finally, oversight committees, judges, and legal scholars may forever question why, after multiple rounds of internal, credible whistleblowers alerted the public of widespread institutional fraud and corruption from within the US Centers for Disease Control and Prevention (CDC), nothing was done except for a complete corporate media blackout.

Despite the condemning initial wave of information just laid out, many at every level of society and institution still tow the pharmaceutical party line of “safe and effective” vaccines. The luxury of such magical thinking is now over thanks to the results of the recent, Nobel Prize-level study conducted by self-funded researchers at the National Council of Research of Italy and the International Clean Water Institute, USA.

The study, titled New Quality-Control Investigations on Vaccines: Micro- and Nano-contamination published in the International Journal of Vaccines and Vaccination, represents an unavoidable wave of clear information supporting an immediate moratorium on vaccination, suspension of government laws mandating vaccination, and simultaneous legal action at numerous levels to investigate a criminal vaccine industry and the establishment offshoots that have worked to prop it up.

What did the recent Italian study find?

The scientists were “baffled” by their findings of lead, tungsten, gold, chromium, stainless steel, gold-zinc aggregate, platinum, silver, bismuth, iron, silicon and many others. The investigations revealed that some particles are embedded in a biological substrate. As soon as a particle comes in contact with proteic fluids, an interaction occurs and a bigger-sized compound is created that is not biodegradable and can induce adverse effects, since it is not recognized as self by the body. The authors conclude the following from their findings:

“This investigation represents a new quality control that can be adopted to assess the safety of a vaccine. Our hypothesis is that this contamination is unintentional, since it is probably due to polluted components or procedures of industrial processes (e.g. filtrations) used to produce vaccines, not investigated and not detected by the producers.

The analyses carried out showed that, in all samples checked, vaccines contain non-biocompatible and bio-persistent foreign bodies which are not declared by the producers.”

How did these foreign bodies get into such “safe and effective” products? An exclusive interview of the study’s lead author Dr. Antonietta Gatti revealed more of the story. When Dr. Gatti was asked what he was most surprised to find, he answered:

“We had never questioned the purity of vaccines before. In fact, for us the problem did not even exist. All injectable solutions had to be perfectly pure and that was an act of faith on which it sounded impossible to have doubts. For that reason, we repeated our analyses several times to be certain. In the end, we accepted the evidence.”

The consensus from the study’s authors was that the foreign bodies detected are very odd as they have no technical use, cannot be found in any material handbook and look like the result of the random formation occurring, for example, when waste is burnt. When asked about the burnt waste theory, Dr. Gatti said:

“When you burn waste, the particles produced are made of different substances that are rarely seen in combination. In some cases, unusual mixtures of different elements are simply due to chance, depending on the atoms or small molecules that come mutually in touch and, at least in a number of circumstances we keep coming across, particles with an odd composition is what is present also in vaccines. That does not mean that the origin is the same.”

The problems for the vaccine industry keep adding up as reality appears to be giving pharmaceutical giants and their “safe and effective” vaccine narrative no quarter. It was publicly reported in September 2016 that multiple independent lab tests of many of the most used vaccines from top manufacturers and in most of them was confirmed the presence of glyphosate, the active ingredient in Monsanto’s flagship herbicide Roundup.

How could glyphosate possibly end up in vaccines? According to information reported by Ecowatch, MIT scientist Dr. Stephanie Seneff described the mechanism as follows:

“Glyphosate could easily be present in vaccines due to the fact that certain vaccine viruses including measles in MMR and flu are grown on gelatin derived from the ligaments of pigs fed heavy doses of glyphosate in their GMO feed. Gelatin comes from collagen which has lots of glycine. Livestock feed is allowed to have up to 400 PPM [parts per million] of glyphosate residues by the EPA, thousands of times higher than has been shown to cause harm in numerous studies.”

The present and near future of vaccine policy and its medical reality remain turbulent and uncertain. On a long enough timeline, pharmaceutical business as usual will lead to full, sustained public outrage.

The talks on appointing Robert F. Kennedy Jr. to a Trump-created commission on vaccine safety and scientific integrity adds hope to over a decade of callous non-action. However, questions remain as to the power and regulatory teeth the committee will wield against an already deeply entrenched pharmaceutical industry.

Regardless of official government solutions, the results of the recent Italian study and other similar ones surely to follow, with the addition of the vaccine glyphosate contamination results, open unlimited channels of legal avenues to oppose mandatory vaccination laws.

In theory, future legal challenges can now rely on new studies to challenge the legitimacy, ethics and mandates that have rested on the false “safe and effective” vaccine talking points. Foreign matter and chemical herbicides – not listed on vaccine inserts – being directly injected into all levels of society appears to make for a strong case against vaccines and any laws, standing orders, or medical mandates forcing them onto society.

How will history write the final chapters of this generation’s attempt at mandatory vaccination?