Note from the editorial staff:
The term “conspiracy theory” is often used in a pejorative sense, so that the disclosures of criminal hidden facts and scenarios, which are as real as possible, would seem ridiculous. At the moment, there is an explosion of alternative versions that seek to explain tragic events with a major impact on society or the global situation. Although some of these are obviously fanciful or exaggerated, many of the versions that were initially cataloged to be so-called “conspiracy theories,” later turned out to be shattering realities. The article below insists on numerous attempts to provide explanations that remain in the category of conspiracy theories, without underlining the major importance of conspiracy reality. We have chosen to present it to you, however, as it contains a number of interesting aspects that we believe are worth knowing. 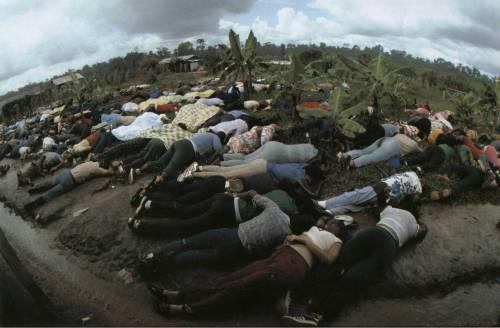 In some respects, the non-professional conspiracists argue a bit more believably than the professionals because they concentrate on Jonestown, rather than on external forces or on-going narratives. Nevertheless, most come to the same conclusion, namely that residents of Jonestown were murdered.

Some believe that Jonestown was a mind-control experiment. Others have focused on the conspiracy against Jonestown which persuaded people it was better to die than to live. In general, however, the non-professionals, with one exception, argue that people in Jonestown were murdered. Even if they killed themselves, it was still murder because the victims had been brainwashed, tortured, or coerced in some fashion.

The title of Michael Meiers’ book, for example, says it all: Was Jonestown A CIA Medical Experiment? A Review of the Evidence. Relying on interviews he conducted with Ryan’s legislative aide Joe Holsinger, the author concludes that it was part of such an experiment, i.e., the CIA’s MK-ULTRA program, which tested mind-control drugs on unsuspecting victims.

Meiers argues that the quantity of psychoactive drugs, together with the meticulous medical records and the layout of the bodies, indicates an attention to detail and evidence that the experimenters wanted to follow. “As the cause of death was noted on the medical records of each Test Person” writes Meiers, “the corpses were dragged to one side and placed in neat, orderly piles”.

The cause would be suicide or murder, since not all victims went willingly. Of course, part of the experiment was not to test the children, but rather the willingness of mothers to kill their children. A convenient side benefit was the CIA’s assassination of Ryan. Another benefit was the discrediting of Mark Lane, who had been targeted for assassination. It was more advantageous to destroy his career rather than his life, since he was within days of proving the conspiracy against Martin Luther King, and his death might have led others to continue his investigation.

I should add that Meiers says that “it is entirely possible that Rebecca Moore was a communications conduit between the experiment and the faction of the federal government that sponsored it”. Just for the record, I am not and never was a communications conduit for any government agency. Despite this warning, Meiers highly recommends my book, A Sympathetic History of Jonestown, as long as readers understand that it is a defense of my family’s connection to Jim Jones and to the CIA.

Meiers provides a universal conspiracy theory which ties Jones and Jonestown to Nazis, AIDS, the assassinations of George Moscone and Harvey Milk, the Symbionese Liberation Army, the Bay of Pigs, Richard Nixon, and the NAACP, to name just a few. Dan White allegedly murdered Moscone and Milk – after all, we only have his confession – because they had learned of Jim Jones’ connection to the CIA.

Most interesting in this regard: “There is absolutely no record of Jim Jones or his Peoples Temple ever having anything to do with Dan White, which is somewhat suspicious in itself, considering the major influence Jones exerted in San Francisco politics”.
Like Matthew Farrell, noted above, Meiers sees the absence of evidence as evidence itself.

Another non-professional conspiracist, Nathan Landau, looks at Jonestown from the opposite perspective in Heavenly Deceptor. Far from Jonestown being a CIA operation, it was an un-American and anti-American concentration camp which Jones established so that he could take over Guyana, in preparation for launching an assault against the United States. More effective than his Nazi antecedents, Jones used drugs to control “poor black pseudo-slaves who were totally exploited by their new masters on the Jonestown plantation”.

Jonestown’s “final solution” focused on homosexuals, blacks, and drug users, who were murdered. Meanwhile many in the white leadership group, including Jim Jones, planned to escape with millions of dollars. “A man planning to die doesn’t deposit hundreds of millions of dollars into foreign bank accounts”. Leo Ryan interrupted the group’s plans, however, and had to be eliminated in order for Jones to get away with the money.

Landau is also sympathetic to Joe Holsinger, and admits that Jonestown’s successful behavior modification program might suggest the involvement of the CIA. But this view “discredits the very highly skilled and motivated upper echelon members of Jonestown who really engineered the commune”. Jonestown was essentially a prototype for small fascist groups which are targeting certain races and religions for elimination. 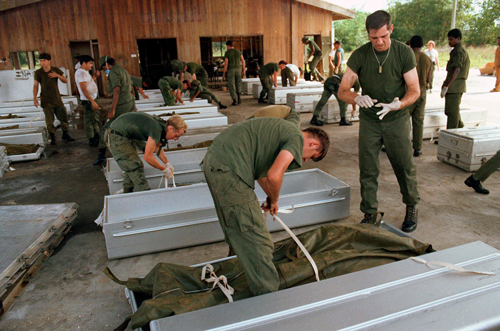 One of the most distinctive conspiracy theories concerning the deaths in Jonestown comes from Laurie Efrein Kahalas, a former member and Temple loyalist. She writes that a government conspiracy followed Peoples Temple from San Francisco to Guyana and ultimately caused the deaths of the Jonestown residents by framing them for the murder of Leo Ryan.

Her book Snake Dance: Unraveling the Mysteries of Jonestown, provides documents supporting her belief – and that of Temple members – that different government agencies were spying and harassing the organization. Kahalas claims that an elite core of Army sharpshooters, not Jonestown residents, shot Ryan. As part of her evidence, she cites the audiotape made on the final day on which Jim Jones says: “I didn’t order the shooting… I don’t know who shot the congressman…”.

Kahalas believes that government assassins killed Ryan because of his support for congressional oversight of the CIA. His assassination set the stage for the deaths in Jonestown because the community would have to take the blame for it. She again cites the death tape: “Now there is no choice. Either we do it or they do it… When they’re shooting out of the air, they’ll shoot some of our innocent babies… They’ll torture our people. We cannot have this…”. In this way, government forces eliminated two thorny problems: Leo Ryan and the Jonestown community.

An interesting footnote to all of this is Jeff Brailey’s description of his visits to Jonestown in the week after the deaths. Brailey came as part of the 193rd Infantry Brigade from Panama to evacuate the bodies from Jonestown. He writes that as he was leaving Jonestown by helicopter, an American government official hopped on board, carrying a large crate of documents he had retrieved from the community. The man told Brailey to shoot anyone who attempted to take the crate away. Brailey said he wouldn’t, but he assumed the man was “a spook,” that is, a CIA agent, who was removing incriminating evidence.

With the exception of Kahalas, the conspiracy theories developed by non-professional conspiracists tend to locate the evil at the very heart of Jonestown: it was either a mind-control experiment or a concentration camp. Either way, people did not actually “choose” to die in any meaningful sense of the word. In this respect, the non-professional conspiracists are similar to the professionals, and to the Internet conspiracists, who all believe that the residents were murdered. In other words, no one finds the option of mass suicide credible.

There are definite gaps and problems in the official story which the Jonestown conspiracy theories address with varying degrees of success. Much information remains classified, and the suspicion that it demonstrates the culpability, in one way or another, of the U.S. government in the deaths, also fuels the conspiracy fires.

The elements of the story are titillating as well: drugs, sex, race relations, communism, and violence make a much more interesting story than do farming, furniture-making, or playing basketball, all part of the daily life of the Jonestown community. Finally, professional conspiracists will find conspiracies everywhere, a tendency which discredits them to all but their true believers. Even if they were right this time, we would never know.

Moreover, the question of suicide feeds the conspiracy theorists. Certainly I would agree that the deaths of the children and the seniors were acts of murder, since they had no choice in the matter. It is the deaths of the able-bodied adults – the perpetrators, if you will – that are really what is at issue. Eyewitness accounts are conflicting. Evidence from audiotapes indicates that the community had rehearsed suicide on several occasions. Was the group merely completing a ritualized behavior? Or was external coercion involved? The conspiracy theorists either ignore the suicide rehearsals, or they explain them as part of a mind control experiment.

The fact that almost all of the theories reject the suicide explanation is significant for several reasons. First, they imply that people in their right minds do not commit suicide. Similarly, no sane person kills either their children or their parents. If they do commit suicide, infanticide, or parricide, it follows that they must be insane, or certainly not of sound mind. Therefore, if the people of Jonestown did commit “suicide,” it was certainly not voluntary. That means that they were drugged or tortured. The most likely scenario, according to the theorists, is that the people were sane, and hence had to have been murdered.

By rejecting the suicide explanation, the conspiracists attempt to seek justice for the victims. In their dualistic worldview, which pits the evil forces of government conspirators such as the CIA or the Green Berets, against the forces of good embodied in individual American citizens, calling the deaths “suicide” allows the conspirators to get away with murder. They read Jonestown as a political rather than a religious event. They see it as a battle between great secular forces of good and evil, with evil embodied in either the CIA, Nazis, racists, or megalomaniacs. The religious aspects of the group fade away in the face of this explanation.

Conspiracy theories, for all their inherent secrecy and implicit danger, are nonetheless comforting because they eliminate uncertainty and moral ambiguity. It is far more troubling to think that people had practiced suicide and then went through with it, believing that they were doing something noble and right, than it is to think that malign powers did away with them for nefarious purposes. It is far more disturbing to imagine that sane and even idealistic people more or less willingly killed their children, than to imagine that some supra-personal power of darkness killed them. Thus conspiracy theories reassure us that what appears wrong or out-of-kilter in the world has a cause outside of individual or collective human weakness and vulnerability. In other words, the moral order, though jeopardized by conspirators, remains in effect.

If we believe that ordinary decent people did extraordinary acts of “evil,” then the moral order is demolished. It seems preferable to believe in evil in the guise of conspirators, than in evil in the guise of our neighbors. Given the profound questions raised by the events themselves, conspiracy theories about Jonestown will undoubtedly continue to proliferate, because they attempt to restore morality and order to a chaotic and immoral world.

The REAL WAR for the future of humanity: Democrats increasingly possessed by demonic forces that seek the extermination of humanity? (2)