The REAL WAR for the future of humanity: Democrats increasingly possessed by demonic forces that seek the extermination of humanity? (2)

What follows in this article is a thought experiment. Many believe the phenomena described here to be real. What do you believe? 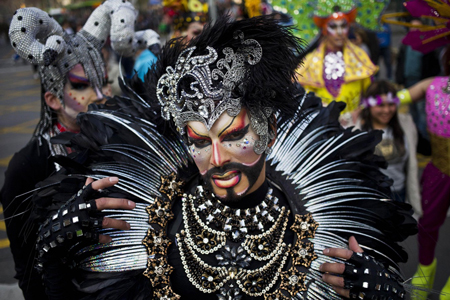 One of the most sinister expressions of demonic influence and demon possession of former human beings is the rise of the LGBT agenda which seeks the destruction of male-female families and human reproduction. The LGBT movement has now descended into absolute lunacy, claiming that men and women are exactly the same, meaning that reproductive organs do not exist and that biological reproduction therefore isn’t real.

They quite literally insist that children are “born genderless” (without reproductive organs) and are spontaneously “assigned a gender” at birth, which causes genitals to magically appear. But those genitals are meaningless, according to LGBT demons, because they claim that men can get pregnant, women can become men and that men can become women through magical invocations.

This utterly insane narrative — which contradicts biological reality — is now being embraced by children’s hospitals, where gender designations are being removed from medical bracelets in the name of LGBT progressivism. This medical insanity, of course, will negatively impact the efforts of doctors to treat the health conditions of those children, given that male and female humans are obviously different in their medical challenges and needs. But the LGBT community wants doctors to pretend that there’s no such thing as a male or female child, and that all children are “created equal.” Thus, LGBT lunatics want doctors to treat male babies and female babies as being exactly the same, even if the medical concerns involve hormones or reproductive organs.

Some men who are part of the insane LGBT movement actually visit obstetrics/gynecology doctors and demand pap smears. This is the lunacy that has now taken over the deranged Left.

Ultimately, this is all an assault on the continuity of the human race which can only be maintained through sexual reproduction involving a male and a female. The demonic Left is attempting to obliterate all normal sexual reproduction by painting homosexual partnership as the new normal, which just happens to coincide with a complete inability to reproduce the human species. (Two men cannot make a baby. Nor can two women, no matter what the deranged, lunatic leftists claim.)

Across all popular culture, including Netflix movies, Amazon Prime programming, Hollywood films, TV shows and music, heterosexual relationships are being demonized and marginalized, while homosexual pairing — and “gender-fluidity” — are celebrated and promoted. This goes way beyond merely respecting the personal choice and individual liberty of people who choose to live with same-sex partners. The promotion of all this is now targeting children as a form of cultural indoctrination.

The upshot is that if an entire generation of children can be brainwashed into choosing same-sex partners, the human race will cease to reproduce after just one generation. Since one of the key goals of Satan is the complete destruction of humanity, this outcome would neatly achieve precisely that goal. Transgenderism and the denial of biological gender is also an assault on the very definition of men and women being “made in God’s image,” as the Christian faith explains.

Make no mistake: The LGBT indoctrination of children — and the celebration of transgender children — is pure evil. It is not merely a crime against those children; it is part of a spiritual assault on humanity and the attempted extermination of the human race which can only be sustained through sexual reproduction between a man and a woman. (By the way, merely stating this obvious point is now considered “hate speech” by the demonic Left, which censors every thought or element of speech that does not further their agenda of the complete destruction of all human life.)

“Climate change” narrative is a war on LIFE on Earth 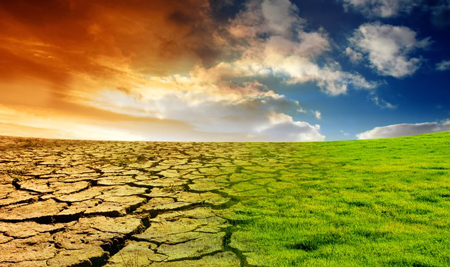 The demonic, destructive, anti-life forces of the Left have also declared war on all life on Earth through the advancement of their “climate change” narrative. This dangerous, anti-science narrative demands the complete elimination of carbon dioxide from the atmosphere — an act that would collapse all plant and animal life on the planet, given that virtually all plants need CO2 to survive.

The global warming narrative calls for a cold, dead ice planet where no liquid water flows because it’s all locked up in frozen ice caps. That’s what the Demoncrats demand: A frozen ice planet, devoid of life, with no CO2 available for plants to use for photosynthesis.

They actually describe their efforts as a “war on carbon,” apparently oblivious to the reality that humans are carbon-based lifeforms. Any war on carbon is a war on humanity, which is exactly what the Demoncrats are carrying out.

CO2 levels are already dangerously low across our planet. A world with higher CO2 would support more life, not less. Higher CO2 levels would unleash more diverse rainforests, lush plant life and abundant animal life across the planet, transforming deserts into forests thanks to the unlocking of frozen water and higher levels of rainfall for inland regions. But this “greening” of the planet is precisely what Demoncrats are hoping to halt… because they are enemies of life and enemies of ecological sustainability. They seek the absolute destruction of all life on planet Earth, almost as if they were trying to pull off some sort of terraforming agenda to kill off humans and render the planet dead.

The entirety of mainstream “science” — if you can even call it that — is now dedicated to this mission of destroying the Earth’s atmospheric chemistry by eliminating all CO2 and driving both plants and animals to extinction. It’s all being carried out, of course, in the name of “sustainability.”
The Devil can’t stop laughing at how easily left-wing humans are brainwashed into believing their own global suicide us part of “sustainability.”

We are not in a political war; we are in a spiritual war

The mistake people make today is thinking that Democrats are merely human beings with different political views. In truth, they no longer possess human consciousness at all. They are possessed by demonic forces that seek the total destruction of life, liberty and humanity. This is why they are obsessed with abortion murder, economic destruction, media lies and the complete obliteration of the family consisting of a man and a woman who can reproduce to perpetuate the human species.

Leftists seek the complete annihilation of sustainable life on Earth. They are actively working to eliminate CO2 from the atmosphere and collapse the entire global food web, and they’re deliberately spreading mass infertility through WHO-demanded vaccine interventions that have been repeatedly proven to administer infertility chemicals to vaccine recipients.
And if the Left wins, humanity DIES.

Step 1: Wake up and realize they are not human. They are demon spirits which have possessed human minds and bodies, rendering them into demonic entities rather than conscious human beings. This is why they behave as evil, deranged, violent lunatics complete devoid of logic, reason or human decency.

Step 2: Realize this is not a political war but a spiritual war. The demon-possessed Leftists don’t merely want to achieve political victory and rule society with “progressive” ideas; they seek to destroy humanity, obliterate human life, mass murder babies, outlaw Christianity, demonize people based on the color of their skin, and even decimate all crops, forests and food sources on the planet by eliminating CO2 from the atmosphere. They are at war with humanity, and they merely pretend to be interested in politics as a means to accomplish their complete destruction of life on Earth.

Step 3: Defeat the demons. Humanity must come to its senses and use every available means to rid the world of demonic entities. Defeating Demoncrats at the ballot box isn’t nearly enough (although it was a start). In many films and books, “demon hunters” are dispatched to drive evil from this Earth. In the film Constantine, starring Keanu Reeves, protectors of humanity use exotic weapons to drive demons out of human bodies, sending them back to hell. Countless other films depict similar defenses of Earth against demonic forces, including the Avengers, which depicts a large portal opening in the sky, through which evil demons rush in from another dimension to annihilate humanity.

Although such films are dramatizations, they are not pure fiction. They depict phenomena that many people believe to be entirely real and happening right now. For example, many people believe that CERN, the Large Hadron Collider, is a high-energy portal to another dimension from which demonic forces are summoned into our plane of existence.

Both the CERN logo and the logo for Google Chrome — built by one of the most demonic, evil tech companies in existence — overlay “666” in concentric circles, indicating their worship of Satan and the destruction of humanity: 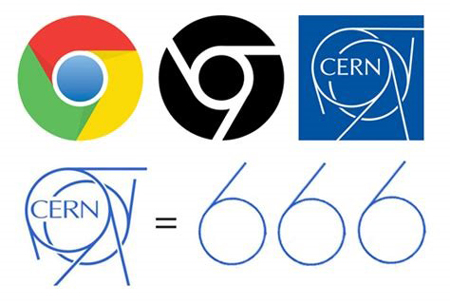 Further supporting the theory, the CERN facility features a statue of Shiva, the Hindu god known as “the Destroyer” of worlds. 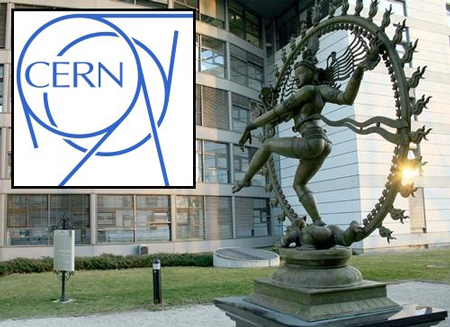 CERN’s connections to the occult are widely discussed across the internet, with some people believing that the bizarre occult rituals that are routinely performed in front of CERN involve “mock human sacrifice” and other forms of Satan worship which scientists describe as a “prank” in order to distract from the fact that they are nonetheless carrying out such rituals. 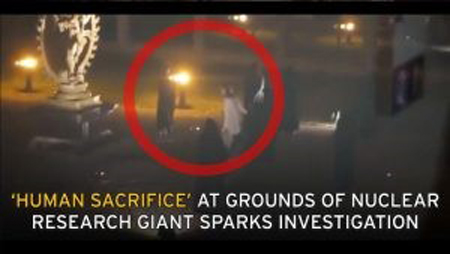 An epic battle of good vs. evil

Look at Google today, which best represents the Democrats and their cheating, lying, censoring and oppression of truth. Google is run by Democrats who absolutely despise America, hate Christian white men and who literally seek the destruction of all knowledge they cannot control. (This all came out in a bombshell internal Google report that was leaked to Breitbart News.)

After banning Natural News, InfoWars and thousands of other liberty-oriented websites and video channels, Google now claims it’s a “conspiracy theory” to believe they exert any bias at all. Google is saturated with evil, which is exactly what enables the discredited technology company to build suppression and surveillance systems for evil communist regimes like Red China, where religion is criminalized by the evil government regime that Google serves. These actions on the part of Google have recently led to Google engineers to flee the company to escape the intense evil that’s present there.

To save humanity, we must defeat not merely Google, but all forms of evil that now dominate our society. In addition to Google, we must also defeat and dismantle the DNC, the CDC, the FDA and the entire left-wing media complex that brainwashes humanity into a suicide cult (through planned disinformation, the embracing of suicidal technologies like 5G, the promotion of life-damaging herbicides, and so on).

Recognize that the Left is not a political movement but an eradication army that is systematically working to destroy humanity and transform the planet into a cold, lifeless dead zone. They cannot be reasoned with, or educated with rational ideas. They are immune to reason because they aren’t humans on the inside. They must be defeated at every level of society in order to rid our world of demonic evil.

Or maybe they’re all just really stupid morons who aren’t possessed by demons but are somehow incredibly evil humans, in which case we need to defeat them anyway.