A robot walks into a bar and takes a seat. The bartender says, “We don’t serve robots.” The robot replies: “Someday – soon – you will.” 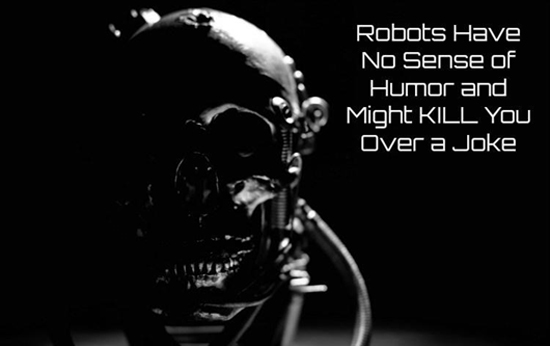 Because the inevitable reality of robot overlords eventually taking over isn’t troubling enough, we now have another reason to be concerned about artificial intelligence. Robots don’t understand humor.

“Artificial intelligence will never get jokes like humans do, ”Kiki Hempelmann, a computational linguist who studies humor at Texas A&M University-Commerce, told the Associated Press. “In themselves, they have no need for humor. They miss completely context.”

Tristan Miller, a computer scientist and linguist at Darmstadt University of Technology in Germany, elaborated: “Creative language — and humor in particular — is one of the hardest areas for computational intelligence to grasp. It’s because it relies so much on real-world knowledge — background knowledge and commonsense knowledge. A computer doesn’t have these real-world experiences to draw on. It only knows what you tell it and what it draws from.”

Puns are based on different meanings of similar-sounding words, so some computers can get them (and some can generate them), Purdue University computer scientist Julia Rayz explained. “They get them — sort of,” Rayz said. “Even if we look at puns, most of the puns require huge amounts of background.”

Rayz has spent 15 years trying to get computers to understand humor, and at times the results were, well, laughable. She recalled a time she gave the computer two different groups of sentences. Some were jokes. Some were not. The computer classified something as a joke that people thought wasn’t a joke. When Rayz asked the computer why it thought it was a joke, its answer made sense technically. But the material still wasn’t funny, nor memorable, she said.

There are pros and cons to developing robots that understand humor.

Some experts believe there are good reasons to develop artificial intelligence that can understand humor. They say it makes robots more relatable, especially if you can get them to understand sarcasm. That also may aid with automated translations of different languages, Miller explained.

But some think that might not be such a good idea: “Teaching AI systems humor is dangerous because they may find it where it isn’t and they may use it where it’s inappropriate,” Hempelmann said. “Maybe bad AI will start killing people because it thinks it is funny.”

Remember Sophia, the robot who said (while looking shockingly amused) that she would “destroy humans”? When “her” creator asked “Do you want to destroy humans? Please say no”, Sophia promptly answered “Okay, I will destroy humans,” like she was causally agreeing to grabbing a pizza for dinner.

Allison Bishop, a Columbia University computer scientist who is also a comedian, told the Associated Press she agrees with all the experts who have been warning us that AI will surpass human intelligence someday.

“I don’t think it’s because AI is getting smarter,” Bishop jokes, then she adds: “If the AI gets that, I think we have a problem.”

Recently it was revealed that robots probably have the capacity to develop prejudices toward others and even to hate. One recent study showed that AI doesn’t need provocation and inspiration from trolls to get it to exhibit prejudices: it is capable of forming them all by itself.

Unlike humor, prejudice does not seem to be a human-specific phenomenon. Experts have warned about the dangers of artificial intelligence for years. The late Dr. Stephen Hawking rang the warning bell for years. In 2014, he told the BBC: “The development of full artificial intelligence could spell the end of the human race. It would take off on its own, and re-design itself at an ever-increasing rate. Humans, who are limited by slow biological evolution, couldn’t compete, and would be superseded.”

Elon Musk, the founder of SpaceX and Tesla Motors, has spoken about the possible terrifying issues we may see in the next few years: “The risk of something seriously dangerous happening is in the five year timeframe. 10 years at most. Please note that I am normally super pro technology and have never raised this issue until recent months. This is not a case of crying wolf about something I don’t understand.

The pace of progress in artificial intelligence (I’m not referring to narrow AI) is incredibly fast. Unless you have direct exposure to groups like Deepmind, you have no idea how fast — it is growing at a pace close to exponential.

I am not alone in thinking we should be worried.

The leading AI companies have taken great steps to ensure safety. They recognize the danger, but believe that they can shape and control the digital super-intelligences and prevent bad ones from escaping into the Internet. That remains to be seen…”

Regarding the news about AI not having a sense of humor, some agree with Lou Milano’s take:

“What’s not nice, is that robots will kill people if we try and teach them humor – nothing funny about that I’ll tell ya. This is another example in an ever growing list of reasons that robots need to be killed. They don’t get humor, have no need for it and should we insist they learn it, they may go on a killing spree.

I’m going to keep shouting it until you all get woke. We have to stop these robots while we can, we have to stop them now before they are afforded civil rights. If you think that’s a ridiculous notion you should know that some robotics experts say that day is not far off.