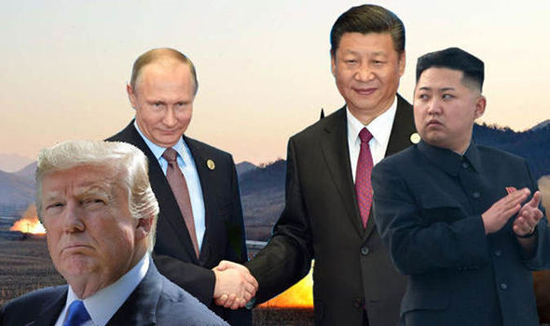 Flaming John Bolton has said on Fox News that Vladimir Putin “is smart… that’s what worries me”. Well, Bolton and the Neocon establishment have good reason to be worried because Russia and China aren’t buying the essentially pernicious idea that America needs to place more sanctions on North Korea.

Russia and China ask for “diplomacy” and dialogue. As we all know, dialogue presupposes that there is indeed a moral plumb line upon which rational discussion ought to be based. Neocons do not like dialogue; they do not want to diplomacy. They want to bomb, bomb, and bomb. John Bolton wrote in the New York Times in 2015: “To stop Iran’s bomb, bomb Iran.”[1]

Sheldon Adelson, the man who even “gave a reported record of $5 million for President Donald Trump’s inauguration celebrations”[2] said that the US “should drop atomic bomb on Iran”.[3] Flaming Daniel Pipes wanted Obama to bomb Iran during his first term.[4]

To Pipes’ chagrin, Obama never did bomb Iran, despite the fact that the Israeli regime assassinated Iranian scientists and developed a virus called Stuxnet to slow down Iran’s nuclear program.[5] In fact, Obama wanted diplomacy with Iran,[6] a rational move which obviously scared out Pipes, the Neocon establishment, and the Israeli regime. That move also didn’t line up with what political manipulators like Sarah Palin were saying.[7]

Put simply, the Neocons do not want to have peace and harmony in much of the world. They want to create insurrection. As Michael Ledeen put it, “creative destruction” is their middle name, “both within our society and abroad”.[8]

Jonah Goldberg said it quite succinctly: “Every ten years or so, the United States needs to pick up some small crappy little country and throw it against the wall, just to show the world we mean business.”[9]

The Neocon establishment and the Israeli regime obviously want to perpetuate this essentially diabolical ideology in North Korea as well. But that ideology is being challenged. Nikki Haley has told the UN: “If you see this for what it is, which is North Korea showing its muscle, then you need to stand strong and vote with the international community to strengthen sanctions on North Korea. And if you chose not to, we will go our own path. They have no care for Russia or China in this. They have not listened to anything you’ve said. They are not going to listen to anything that you say.”[10]

Vladimir Safronkov, Russia’s deputy envoy to the United Nations, responded: “Sanctions cannot be a cure-all panacea. And this has been demonstrated by history.”[11] That indeed is a pointed rebuke to Haley and the Neocon establishment. As an alternative, Safronkov proposes “creative diplomacy”.[12]
Safronkov moved on to say: “Any attempts to justify a military solution are inadmissible and will lead to unpredictable consequences for the region. In the same manner, attempts to economically strangle North Korea are equally unacceptable, as millions of North Koreans remain in need of humanitarian aid. Everyone needs to acknowledge that sanctions will not solve the problem. In that manner, we simply rush towards a stalemate.”[13]

This is certainly a good start. It seems to show that the Neocon will have a hard time implementing their worldview on North Korea.