Russia in the Global Arena of Fight Without Rules (1)

“If the world is offered the law of the jungle, you need to play according to the laws of taiga” – Sergey Karaganov. 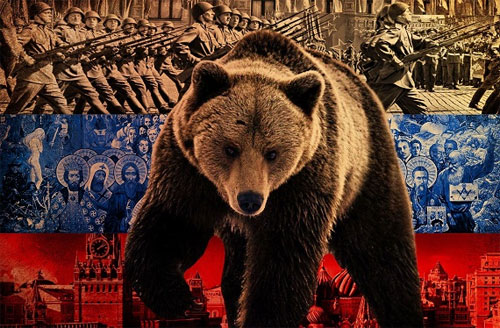 The year 2000 was not only the beginning of the new millennium, but also an interesting change of pieces on the world chessboard. In Russia, a deadly tired Boris Yeltsin blessed Vladimir Putin for power, and in the United States, George W. Bush won the election, or at least was awarded the job by the Supreme Court.

These two figures were to begin a new round of the game on the chessboard. Vladimir Putin led a country where kleptocracy, exulting and reveling in the power and vastness of the plundered riches, and those treasures that had yet to be stolen, built partnerships with Western kleptocracy, while Russia was losing 2 million of their citizens each year and facing a grim future.

George W. Bush led the country, where the neo-conservatives had already tasted the poison of impunity and looked with greedy eyes at the Middle East, now defenseless, but still full to the brim of black gold and other treasures. The key positions of US domination: in the military sphere, in the economy, in the development of technology and “soft power” – allowed the hegemon to declare its full right to rule the whole world for its own sake, peace and “interests.” The world superpower entered the arena in all the brilliance of its invincible power. Francis Fukuyama summed up the development of humanity with the thesis about the end of history and the eternal domination of the United States.

Brzezinski’s exaltation regarding the subordination of the central geopolitical arena of the world to the only sovereign of the world, the United States, was combined with the insistent motive of the main task for the future – to preserve this power forever. The omission of the main ideologist and demiurge of the unipolar world was that he did not have time to realize the obvious: you cannot lose what you have never owned.

The rhetoric of the main mastermind of US imperial grandeur is amazing. Using the terminology of the more brutal times of ancient empires, the three great duties of imperial geostrategy are:
– to prevent collusion between vassals and preserve their dependence on overall security;
– maintain submissiveness of subordinates by ensuring their protection;
– Preventing the union of barbarians.

Brzezinski is not shy in expressions, why should he be? To him the victory was in his hands, the barbarians have been driven into a stall, now all that remains is to retain this power forever!

The speech by Vladimir Putin in Munich on February 10, 2007, must be viewed from time to time by those politicians who once again try to shake the world with a dilemma from Dostoevsky’s novel Crime and Punishment – “I Am Trembling or I Have the Right,” Raskolnikov’s syndrome was noticeably aggravated in those years by the political elite of the hegemon and its satellites, when Russia appeared before the world drained of blood and defenseless. None of them expected such a call from the young leader of a dying country.

For the first time in 16 years, Russia acted on the international stage in the unprecedentedly bold role of a country rising from western engineered ruins and realizing in itself the power to challenge the correctness of a world enslaved by the empire. It is interesting to look now at the faces of Western politicians then in the hall, perhaps for the first time in their lives who were confronted with sobering truth.

But the truth in the mouth of Putin sounded alarm with his challenging rhetoric:
“But what is a unipolar world? No matter how they decorate this term, it ultimately means in practice only one thing: it is one center of power, one center of governance, one center of decision-making. This is the world of one master, one sovereign. And this is ultimately destructive not only for everyone who is within the framework of this system, but also for the sovereign itself, because it destroys it from the inside.” 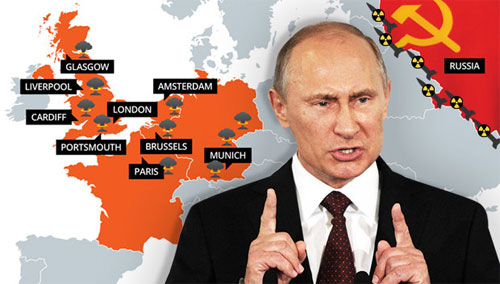 How could those politicians who represented the interests of the sovereign that day in Munich not hear a warning from Putin? After all, it did not sound like a threat, but some good friendly advice. In the ecstasy of power over the whole world, who among American politicians and their vassals could then believe Putin?

“I believe that for the modern world, a unipolar model is not only unacceptable, but impossible as well. The model itself is inoperative, since this is not and cannot be the moral and ethical base of modern civilization.”

Accurately diagnosed with a fatal disease did not help the patient, the empire rushed to the abyss in powerful steps. Today we are witnessing a paralysis of power in the entire trans-Atlantic empire, because as Lord Acton put it – power tends to corrupt, and absolute power corrupts absolutely.

90s in Russia: The Lessons of Tragedy

What could the inhabitants of the stall feel? When did the awakening from the trouble of mirages of liberal democracy begin? When we saw Clinton dying with laughter next to drunk Yeltsin. When the White House in Moscow turned black from shelling by tanks in 1993, many hundreds of victims were not mourned by those whose freedom they wanted to protect. When crowds of street children were sitting in a dope invoked trance sniffing glue, and young girls dreamed of becoming prostitutes.

From the tragedy of the 90s, the Russians learned several important lessons:
– The sovereignty of a nation can be lost not only by surrendering positions to the enemy’s army, it can melt insensibly and quietly because of the betrayal of their elites;
– Partnership with Western countries is in fact – imposed vassal relations, inevitably leading to ruin, loss of national culture, plundering of national wealth, poverty and impoverishment of the population and shameless luxury life of the comprador elite;
– Privatization was the lesson of the most cynical and ruthless weaning of the collective wealth of the nation by a gang of liberals who were trained in shock therapy according to medicinal economic prescriptions of Milton Friedman;
– Having lost sovereignty in key areas of the nation’s activities: military, financial, informational, educational and food security, the nation is becoming slaves, although supervisors look very presentable in banking offices and glittering transnational corporate (TNK) buildings;
– Any attempt of disobedience is severely punished by sanctions, information pressure, isolation in the international arena and discredit or demonization of the national leader.

An analysis of Putin’s strategy to revive Russia and change its position in the international arena shows which initial positions he relied on at the beginning of the path.
– A sovereign with absolute power does not need the constraining framework of international law, which means that it is useless to rely on institutions that support them, except for those where Russia still has veto power;
– Moral for the sovereign becomes an extra burden (Ayn Rand and Nietzsche). So, the sovereign will stop at nothing, even the most disgusting violation of moral norms, because the lot of vassals is submission and unconditional approval;
– Almost all former allies of the USSR no longer see Russia as an ally and are not looking for ways to cooperate, Russia is alone on the battlefield as never before;
– The only way to salvation is to rely on the Russian people, who have already realized the tragedy of their experience of democracy and friendship with the West, and tasted the grief from the betrayal of elites;
– It is necessary to quickly and imperceptibly restore the combat effectiveness of the army and navy, and then, relying on the national memory of the battles won, to begin preparing for the big game.

The Forerunner of the Ideological Crisis of the American Empire

Imperial designs in the USA flourished on the philosophy of Atlantism in the bold sayings of Ayn Rand (Alice Rosenbaum), the ideological inspirer and main witch of the American establishment at the end of the twentieth century. Every year across the world more than half a million copies of her books are published, and now more than 25 million have been produced. Interest in books by Rand not only does not fade away, but is also increasing almost exponentially. 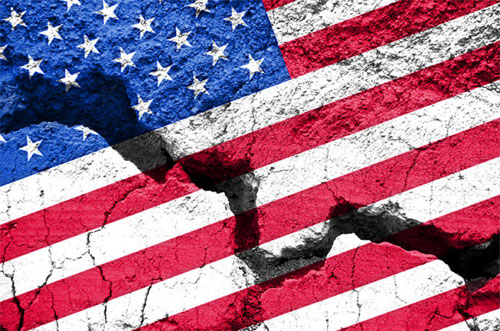 The ideas of Rand brought up the third generation of business and political elites in the West. The person in whose head the financial and economic life of the country and the whole world was formed, for many years was a member of the “Collective” of the Ayn Rand group, a consistent student and admirer. The philosophy of objectivism had a great influence on Alan Greenspan. Greenspan recalls: “She made me believe that capitalism is not only an effective and practical system, but also a highly moral one.” Ayn Rand was a strong supporter of the superiority of the free market over any form of collectivism and socialism. She tried to prove the morality of liberal capitalism, considering the free market a necessary evil, which is best suited for imperfect human nature.

The Russians did not find anything moral in liberal capitalism, not only because the early years of shock therapy terrified them with absolute cruelty and injustice, but because they remembered other relationships and other values. The Russians had a powerful immune defense against greed, venality, hypocrisy, they didn’t have anything cynical in their soul to see others better or worse than themselves. The society of equality and fraternity left an indelible mark on the nation’s memory.

In 1964, just two years after the Caribbean crisis, Ayn Rand gave an interview to Playboy magazine.

„Playboy: You said that today any free nation has the moral right, if not the obligation, to attack Soviet Russia, Cuba or any other slave pen. This is true?

Ayn Rand:
Absolutely. A totalitarian state that violates the rights of its citizens is outside the law and does not dare to assert its own rights.”

How clearly linked are ideological twins Ayn Rand and Zbigniew Brzezinski with this striking metaphor “the slave pen for livestock”! And how long could one expect that the slaves would want to remain in the pen without any desire to try the fortress of the fences. Nowadays even poor people of Haiti rebel and pray Putin to come to the rescue and free them. They wish to become a colony of Russia, knowing from history that true Russians never treated other peoples like cattle.

The semantic sequence of the “slave pen for livestock” metaphor of Ayn Rand and the thesis about preserving the obedience of the barbarians by Brzezinski are illuminating. If we are talking about a country with a legitimately elected government such as Russia, Libya, or Syria that practices imperfect democracy according to opinions of “free” nations, the “slave pen for livestock” should be attacked. And then you can follow the rules of Brzezinski and “maintain submission of subordinates” by all means and forever!

How was it possible with such an ugly mask of hypocrisy to count on the preservation of the “soft power” of the United States in a rapidly changing world? In a world where official media still aspire to control narratives, but no longer dominate minds? The Internet and social networks have changed the world not in favor of deceitful media, and those who are used to controlling the masses as slave cattle in the pen have lost.