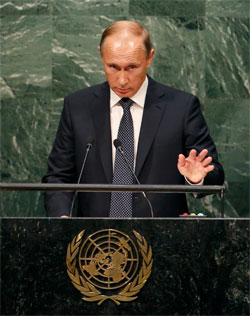 Vladimir Putin: “It seems that someone would like to impose upon us some new game rules, deliberately tailored to accommodate the interests of the privileged few…”

New World Order agents have recently received another major defeat when it was reported that Russia “deployed its bombers to the Hamadan airfield in Iran to enhance its offensive capabilities against Daesh, Al-Nusra Front and other radical groups wreaking havoc in Syria. The West was not happy with the news.”[1]

Obviously we are continuing to see the hypocrisy of the so-called war on terror. Russia acts against ISIS, but NWO agents are mad and sad. One needn’t be an intellectual to realize that something fishy is going on here.

One also needs to give credit to Russia and Iran, despite the fact that they are really outnumbered in America. For example, when was the last time that Hollywood made a single movie that did put Iran and Russia in their proper place?
Just take a look at movies such as The Russians Are Coming, Air Force One, Rambo: First Blood, Rambo III, Salt, Dark Knight Rises, Equalizer, Argo, London Has Fallen, Batman v. Superman, Iron Man I and II, Eastern Promises, The Sopranos, Avengers, Invasion U.S.A., Indiana Jones andthe Kingdom of the Crystal Skull etc. The list is almost endless. And nearly all the villains and terrorists in those movies are of Russian or Muslim descent or had some connections with Russians or Muslims.

And if Russia and Iran are not villains, Hollywood producers make sure that they do portray them in a negative light. But why haven’t they produced a movie about Israel’s terrorist activities in the Middle East? How about the bombing of the USS Liberty in 1967? The bombing of the King David Hotel in 1946? The assassinations of Iranian scientists in 2012? Do Hollywood producers mean to tell us that they don’t know about these things?

Or how about telling the American people that Hollywood producer Arnon Milchan is or was an Israeli intelligence agent.[2] Milchan openly admitted that he secretly helped Israel develop its nuclear warheads, but Milchan – whose films range from Fight Club, A Time to Kill and The Revenant to Pretty Woman, 12 Years a Slave and Assassin’s Creed – is still walking around and bragging about what he did. No one is asking for his arrest!

“Do you know what it was like to be a 20-something guy whose country decided to let him be James Bond? Wow! The action! That was exciting” said Milchan.[3] With the help of Shimon Peres, Milchan operated in at least 17 countries just to help Israel.

Does Milchan regret his actions? Nah. “I did it for my country and I’m proud of it” he said.[4]

So, we have Israeli villains virtually everywhere, but the Khazarian Mafia would like to let us know that the true villains are Russians and Iranians. Alexander J. Motyl, a professor of political science at Rutgers University, has recently written in Newsweek that Putin is “the biggest obstacle to peace and the key source of potential war.”

Instead of dealing with the real issue, Motyl moves on to say that Putin’s foreign policy is “grounded in his realist fears of Western strategic encirclement.”

Over the past five years or so, Putin has delivered one speech after another meticulously detailing where the issues lie and what the West needs to do in order to maintain its credibility, but Motyl has ignored all that and moved on to promote a diabolical ideology. Here are just 15 statements that clarify many of Putin’s positions:

Motyl also says that Putin’s move in places like Syria is grounded in “his authoritarian regime and imperialist ideology.”

Jim W. Dean would almost certainly respond “You simply can’t make this stuff up.” The Zionist regime has moved its armies virtually all over the Middle East and much of Europe, but still, Putin is the true villain here! “Were his foreign policy grounded in some discernible logic” Motyl promiscuously states, “his moves would be predictable and ex post facto explicable.”

Let’s start with Syria. Assad won the election by 88.7 percent. That obviously indicates that the Syrian people want Assad to be in power. It’s only a small minority that actually wants Assad gone. And there is no doubt that that small minority has been influenced by ideological forces from Israel and the United States.

As a matter of fact, we know that the Israeli regime wanted Assad gone from the start.[5] And we all know that the Zionist State of America has been Israel’s little puppy from time immemorial.[6] In fact, it was Netanyahu who said that “I know what America is. America is a thing you can move very easily, move it in the right direction.” 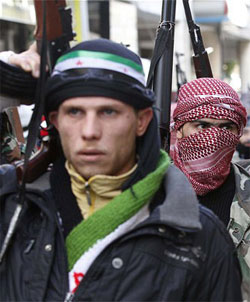 This is why the US has been supporting the so-called Syrian rebels in the region, despite the fact that the US knows that those people are dangerous and pledged “loyalty to al-Qaeda”.

So, can Motyl really say that the Syrian people must bow down to the will of the minority, namely terrorists like ISIS, al-Nusra, al-Qaeda etc.? And doesn’t he think that Putin made the right move in protecting Assad from ISIS?

The second issue Motyl has to deal with is simply this. USA Today itself reported: “Crimea’selection committee said that 97% of voters backed a union between the largely ethnic-Russian peninsula and the huge neighboring country.”

Who in his right mind would say that the 3% should rule over the majority in a really democratic society? Don’t Motyl and his bosses tell us ad nauseam that they are promoting democracy around the world? Does democracy mean the minority should take precedence over the majority? Obviously Motyl is making Putin’s point here: “It seems that someone would like to impose upon us some new game rules, deliberately tailored to accommodate the interests of the privileged few…”

Motyl cannot defend his position morally and intellectually because he is part of the New World Order, which is a diabolical system that seeks to subvert the moral and political order. People like Motyl are so blind that they cannot realize that other nations are watching what is actually going on. China is now willing to support Iran and Russia in Syria, and that again is a devastating news for the New World Order.

As Friedrich Nietzsche perceived, once Logos is out of the moral and political equation, “nothing necessary remains in one’s hands.” When nothing remains in one’s hands, then all hell breaks loose. Truth becomes the lie and vice versa. Nietzsche again said “To be truthful means using the customary metaphors – in moral terms: the obligation to lie according to a fixed conviction, to lie herd-like in a style obligatory to all.”

There are good reasons to believe that people like Motyl are liars and are attempting to pass on their diabolical ideology to the masses. There are also good reason to believe that countries like Russia, China, and Iran are doing a good thing when they resist the New World Order ideology in places like Syria. It shows that people are getting tired of political Satanism. It shows that countries are waking up.

Aggressive Hospital Vaccine Policies: Get Vaccinated Or Lose Your Job!