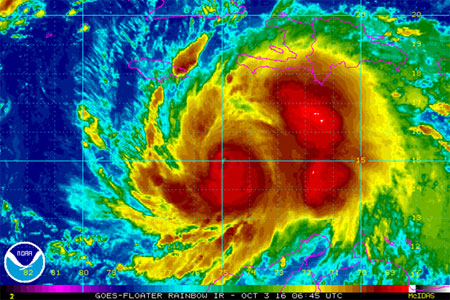 How is it that two of the strongest hurricanes in 2016 (Hermine and Matthew) stroke the U.S. mainland and have both been aimed to hit Florida?

If you’re trying to throw a wrench into the Florida State Government, there’s no more effective way than to geo-engineer a hurricane and send it northward into the sun-drenched peninsula. Before the hurricane hit, many chemtrails watchers in the Florida had noticed a dramatic uptick in the chemical geoengineering operations statewide. Such a development never bodes well for the region’s highly unpredictable weather.

Whoever was steering Matthew appeared to have quite a deliberate purpose in mind, and it was not just Florida that was in the crosshairs. Superstorms of this magnitude always have multiple objectives, just as Superstorm Sandy did in late October of 2012. That superstorm inflicted as much damage as any ever has especially throughout the Northeast.

Many of the storms that barrel up the Eastern Seaboard seem to have a mind of their own and often surprise with a punch as they head north to highly populated metro areas of the NE. Given the 2016 election cycle, the politicos at the federal level would have loved to sow seeds of chaos anyway they could in order to create cover for an election theft. For many reasons the Obama Administration really needed a Clinton victory in order to preserve its legacy of utter destruction. Obama, himself, required such a Democratic win to simply stay out of prison.

The critical point here is that many superstorms have been geo-engineered over the past couple of decades. Those that produced a massive amount of damage are good examples of disaster capitalism at its worst (Remember Katrina in NOLA). This is exactly what the weather controllers do from time to time in order to accomplish several goals simultaneously. 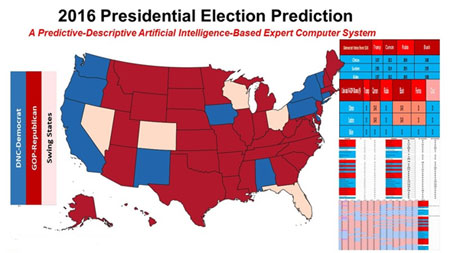 Of all the key 2016 swing states, Florida had the most electoral votes to deliver.
Florida: A Crucial Swing State

There was no question that neither Donald Trump nor Hillary Clinton could have won the 2016 election without winning the 29 electoral vote of Florida. It is truly that big of a state where it concerns the outcome of presidential elections. North Carolina and Virginia are also critical states and they were also in the hurricane’s path.

Whereas the Trumpsters were content to let the chips fall where they fall, the Clintonistas were not so amenable to letting nature take its course. The Democrats are often dead set on controlling nature itself, particularly when the outcome is so highly consequential. After all, the most famous chant at the Trump campaigns has been: “Lock her up!”

When such a fierce and unprecedented movement has formed to lock up the former Secretary of State, it ought to be clear that there are other Democrats who are likewise facing existential threats. However, Hillary Clinton’s crimes have risen to the level of high treason, crimes against humanity, genocide, state-sponsored terrorism, gun-running to terrorist organizations among many of the other serious felonies. Hence, the desperation to use any and all means at the DNC’s disposal to steal the election had become quite obvious.

Toward that end, Florida had become ground zero in this nuclear political war. The DEMs could not afford to lose Florida, for their NWO plans are in danger to be thwarted by the Trump presidency. And many of Hillary’s co-conspirators are likely to go to prison for a long time. 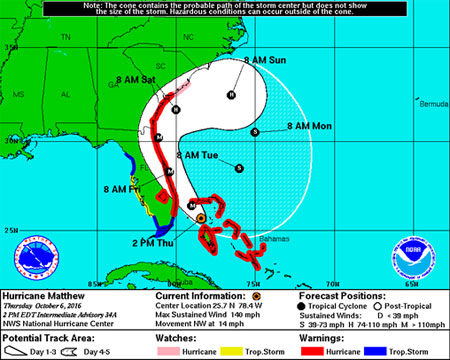 How is this projected path for the geoengineered category 5 hurricane?!

The NWO cabal that controls Planet Earth frequently utilizes various forms of weather warfare to accomplish its goals. As a matter of fact, the ruling elites control a global network of space-based technologies very similar to HAARP which can be used for weather modification as well as climate engineering. The whole world has experienced profound alterations in the atmospheric conditions as a result of their multi-decade meteorology experiments.

In the aggregate these manufactured radical changes have created a phenomenon known as Global Climate Change. In fact the geo-engineers working for the globalists have so transformed Earth’s weather that they were able to substantially contribute to what was already a natural but small global warming trend. In other words, the warming experienced by every continent over the past few decades was primarily a geo-engineered phenomenon, not the result of manmade CO2 production.

This ongoing plot by the cabal is designed to foist a One World Government on the world community of nations using “Environmental Armageddon” as the justification for such emergency measures. A One World Government is the ultimate goal of the ruling elites whereby they ultimately control every natural resource on the planet. They likewise seek to control the world’s weather patterns through worldwide chemical geoengineering programs and highly advanced HAARP technologies.

People living in Florida have seen a considerable increase in the spraying of chemtrails aerosols during October 2016. This month has historically been one of Florida’s sunniest and driest. With the relentless chemical geoengineering throughout 2016, chemclouds have been spreading out to cover the sky, bringing massive amounts of moisture over the entire Peninsula. The following graphic illustrates this atmospheric dynamic as it unfolded in April 2016. 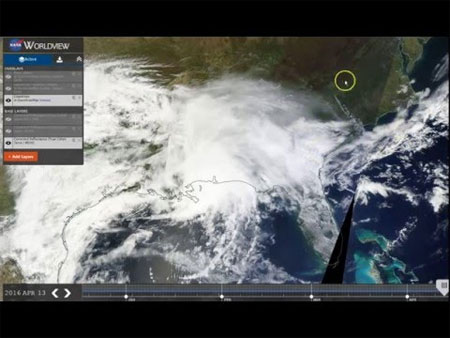