Sacred Geometry and the Art of Scriptural Writing (3) 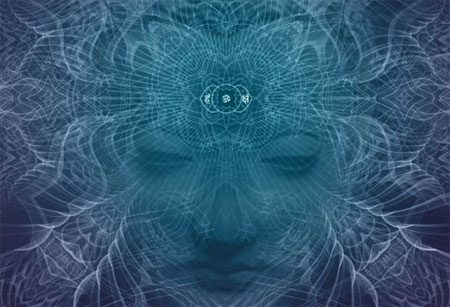 The Golden Ratio was inferred in the Fibonacci set found in the combined Gemetria values of Yahweh and Elohym. By the way if every set in the Fibonacci sequence was analyze it would be found to represent a 2/3 ratio (“For where two and three are gathered together in my name, there am I in the midst of them (KJV Matt: 18:20)”). Also notice that the eighty (80) letters in the first two verses of Genesis infer the symbolism of the letter PEI. PEI is codified a few more times in spectacular patterns in the first chapter of Genesis. I will discuss them below: however, note how the text is constantly reinforcing its position on symbolism by given redundant examples.

When the word ELOHYM is studied it is shown to esoterically hold within its structure the formula for PI: Aleph (1), Lemmed (30 = 3), Heh (5), Yud (10 = 1) and MEM (40 = 4): going counterclockwise from the number three (3) it reads: 3.1415 or the short formula for PI. Consider that by putting the five letters that make up the word ELOHYM into a circle preserves the knowledge of the formula for pi as the diameter of a circle. This becomes exceedingly important as the analysis of the texts continues. We have already seen that PI was well used in the analysis of the sphere that the six letters of BERESHITH generated. These mathematical patterns are by no means aberrations in the texts.

The sacred scriptures often uses numerical figures that appear to be too large as seen with PEI and BETH in the example above representing tetrahedron geometry; however, as it has be demonstrated the text does adjust itself when it has sufficient data to work with.

Finally, on this point I want to bring to the attention of the reader exactly what the Genesis Formula was created to convey and I think it was done very well with the example of the tetrahedral forces. When taking the ten letters of the Genesis formula and placing them out in an array it is found that the Vesica Piscis appears. Note that the four ones (1s) produce the two intersecting cycles that create the Vesica Piscis. It is easily seen in this diagram how Elohym (Trinity) separated the ‘heavens and the earth’. The mini-Kabbalistic Tree of Life image also preserves the image of the Vesica Piscis. 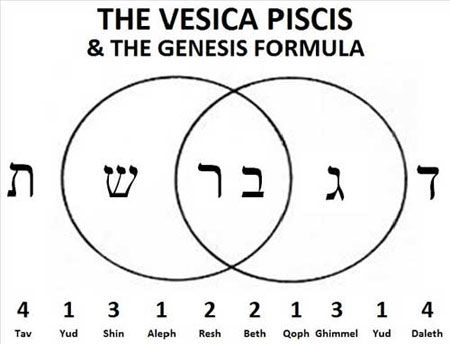 The fact that the Star of David and the Kabbalistic Tree of Life are indelibly linked in the esoteric construct of the first chapter of Genesis indicates that it is the tetrahedral forces that dominate and govern the psyche and hence the universe at large. I am wondering here if this knowledge that is preserved in the psyche of humanity and in the literature of antiquity around the world is not a dire warning, to the future, that these tetrahedral forces should not be tampered with on a physical level; rather, these forces can only be tamed on a psychic level. I am thinking here that the terrible mythical lore surrounding the destruction of the high civilizations of antiquity (such as the mythical lore of Atlantis) was due solely to the advancement of technology coming to a state where arrogant scientists and corporations think they can manipulate these dynamic forces for their own profit. Woe to the governments around the world that do not rein in these arrogant scientists and corporations for it will become their responsibility, in the aftermath of the coming worldwide catastrophes, to leave behind megalithic monuments to their failure, as a stern warning to all future generations.

Think of the legacy these ancient sages have left humanity in their wake. After the destruction of their highly advance civilizations they created great megalithic civilizations solely to leave a warning, to the future, of what happened to their cultures. They then wiped away all knowledge of advance civilizations. They went out of their way to destroy all advance technology. Look at the traditions of the America Indian who would not allow anything to develop unless they first considered how it would affect those that would come after them for seven generations. Look at the Catholic Church’s attempt to stay the advancement of science and failed. Apparently the Church saw the coming catastrophes and left behind monumental works of art relating solely to this warning that antiquity has left humanity.

4. The kabblasitic tree of life & the star of David 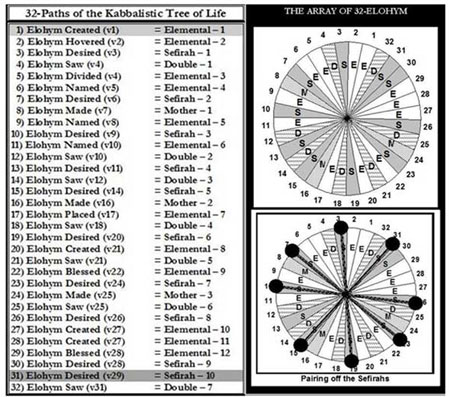 This sequential ordering of the 32-Elohyms becomes extremely important as the analysis continues. In noting the four categories of the Kabbalistic Tree of Life and where the SEFIRAH are the outer frame of the Tree of Life literally embosses itself in the cycle of 32-Elohyms. It is quite interesting to see that eight (8) out of the ten Sefirahs pair off 180° from each other. The last two Sefirahs pair off by virtue of not being 180° from each other. These last two seem to be floaters of a sort seeing they would be represented in the central column of the tree. What I mean by floaters is that depending upon how the tree is viewed it can appear to be two cubes one on top of the other. If the reader remembers the mini-Star of David in the Genesis formula where the two fours are split into four twos then it is possible to envisage these two last Sefirahs as floater representing an additional two Sefirahs forming a three dimensional image. It is quite interesting that in viewing the Kabbalistic Tree of Life as two cubes (rather than two circles) one on top of each other forms a Vesica Piscis in the center.

Eerily though this 2/8 ratio brings up images of the Beth/Pei interface; however, PEI was already in the mix so-to-speak because as the Mouth of God it has thirty-two (32) teeth, which demonstrates that PEI is esoterically all over the first chapter of Genesis. Nonetheless it is not too difficult to complete the Kabbalistic Tree of Life from the data (word associations) that is at hand; however, note that the scriptures is defining a Natural Array pattern for the Kabbalistic Tree of Life rather than the traditional pattern. There is precedence for this in the original source materials from whence the esoteric science originated, which allows for the writing of the sacred scriptures of the world (see Universal Mathematical Matrix). 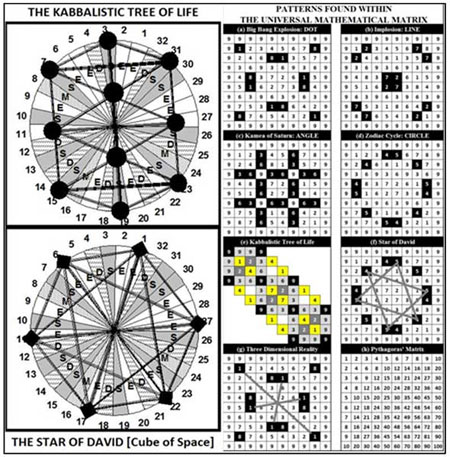 Before I continue the analysis of the Kabbalistic Tree of Life another graphic image needs to be aired. The twelve Single (Elemental) letters designated ‘E’ in the four circular charts. Six of the Elementals pair off into three pairs 180° from each other forming a perfect Star of David. It is not quite perfect because when the star is studied it is seen that the points of the star are separated by four or five positions of the Elohyms. That is quite curious seeing that we just went through studying tetrahedral geometry with the PEI/BETH interface. Note that to the right and left of the axis poles of the star there are eight positions of Elohyms on each end; whereas, in the center of the star there are five positions on the left and five positions on the right. Consider the Star of David as two tetrahedrons where the axis poles control a total of 16-Elohyms and the center of the star controls 10-Elohyms: that is a 5/8 ratio or a set in the Fibonacci sequence of the Golden Ratio.

When analyzing the word structure in the six days of the Genesis Creation Account a very startling discovery was made. In day one of creation there are 31-words, day two has 38-words: combined these two days have a total of 69-words. The third day of creation has 69-words and the fourth day of creation has 69-words: this gives a grand total of 207-words in just the first four days of creation. When looking at the Kabbalistic Tree of Life it can be seen that the third through the eighteenth positions (3-18) of the Elohyms are all housed in the first four days of creation. 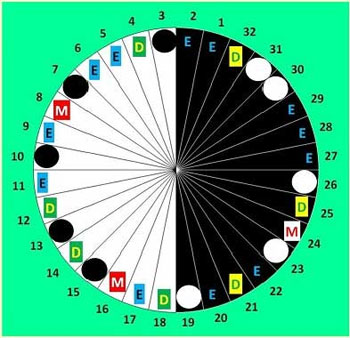 The word LIGHT in the first and fourth days of creation has a Gemetria value of 207. The aggregate of three to eighteen (3-18) is 168. The aggregate of 32-Elohyms is 528; thus, 168 is the diameter (PI) of the circle with a circumference of 528. Again the formula for PI is used to precision. The text is interpreting the LIGHT as PI; however, it has already been determined that the word ‘ELOHYM’ represent PI. The entire first four days of creation are also called LIGHT. The text is defining what LIGHT is.

Saint John in the New Testament is referring to spiritual light when he says, “God is light and in him there is no darkness”. Here in the first chapter of Genesis the LIGHT is Sunlight not transcendental light. When subtracting 168 from 528 the quotient is 360 and a circle has 360°. Here above it is easy to comprehend what is being said in the second verse of Genesis when it says, “the earth was without form and void and darkness was on the face of the deep”. This above image, depicting the entire first chapter of Genesis, certainly does looks like a Tai Chi symbol.

Notice what is being conveyed here. Each of the 32-Elohyms is a circle with a diameter (microcosm); whereas, the large 32-Elohym placed in a circle also depict PI and a 360° circle (macrocosm). This same concept of microcosm and macrocosm is built into the word LIGHT and its larger version spread over the first four days of creation and the first four chapter of Genesis.

6. The chakra system and the Kundalini Serpent

When further analyzing the calculations in the first four days of creation relating to the four categories of the Kabbalistic Tree of Life a number of interpretations come to the fore. The five SEFIRAH: 3, 7, 10, 13 and 15 total to 48, the five ELEMENTALS: 5, 6, 9, 11 and 17 total to 48, the four DOUBLE letters: 4, 12, 14, 18 total to 48 and the two MOTHER letters 8, 16 total to 24. The aggregate of 3-18 is 168 or the hours in a week and this 3½ patterns points to a seven day week but it also points to the coiled serpent (lingam) that lays dormant at the base of the spine. The ascent up the central column, which is being symbolized here, suggests the rise of the Kundalini Serpent. In the mundane world this tree is known as the Kabbalistic Tree of Life; however, the bible defines it as the Tree of the Knowledge of Good and Evil.

Humans in the material world may turn everything topsy-turvy but nonetheless it is what it is. We can all laugh at ourselves because in Yahweh cursing Adam and Eve out he puts an angel to guard the Tree of Life with a twirling flaming sword: we can only pray that the angel keeps us mortals away from it; though, it is an awful pity that he’s rarely successful. The symbols of the sacred scriptures can become confusing because of the nature of the opposites.

If the New Testament says LIGHT, DARKNESS, TREE OF LIFE or any symbol it is diametrically opposite to the Old Testament and vice versa. Even Saint Paul complained of this in his epistles. We human tend to think we are talking about the same thing, when talking about any given issue, when actually we are at cross purposes to each other. You can take it to the bank, Christ is the Tree of Life in the New Testament and Yahweh is the Tree of Life in the Old Testament.