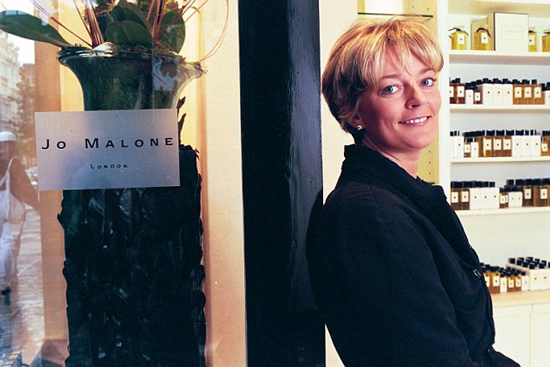 Perfume magnate Jo Malone has a sense of smell so acute she can detect cancer like trained sniffing dogs, according to researchers at the Medical Detection Dogs in Milton Keynes, U.K.
Malone, 53, discovered that she too can detect illnesses by detecting subtle changes in the body’s scent. The scent industry giant underwent a test at the charity center last year (2017) to determine the accuracy of her olfactory sense. The center, which specializes in training dogs to sniff out illnesses, asked Malone to smell five pots and identify one that contains tiny doses of amyl acetate diluted in mineral oil.

Malone has also been previously reported to have allegedly smelled her husband’s disease. Malone initially thought it was cancer but was later diagnosed as Addison’s disease, an adrenal gland condition.
“This can add to early diagnosis that can save lives. It’s not dogs or a regular test, let’s work together and get this research going so these amazing animals can help with diagnosing cancers early and then more people will survive it” Malone said.

Speaking at the morning show Good Morning Britain, Medical Detection Dogs CEO Dr. Claire Guest said that illnesses trigger “a biochemical change, which leads to a change in our odor that can help in diagnosis. The potential is absolutely huge.”

Not one species in the animal kingdom can hold a candle against dogs when it comes to sniffing. Their acute sense of smell is due to their massive 300 million olfactory receptors, compared with humans who have a measly six million receptors. Various studies have already established dogs’ ability to sniff out cancer in patients. A 2004 study in the British Medical Journal revealed that trained dogs were able to detect a unique odor signature present in patients with bladder cancer.
Another study found that dogs were able to discriminate urine from prostate cancer patients against urine samples from healthier individuals after two years of training. Data showed that dogs were able to distinguish cancer samples in 30 of 33 cases, at 91 percent sensitivity and specificity.

A Japanese study published in 2011 also found that dogs were highly-effective in detecting colorectal cancer through breath and fecal samples. Researchers found that dogs showed a sensitivity of 0.97 and a specificity of 0.99 in detecting colorectal cancer in fecal samples. Data also revealed that the animals had a 0.91 sensitivity and 0.99 specificity in detecting cancer using breath samples. The dog’s sense of smell were equally accurate in spotting the early stages of cancer, researchers added. The findings suggest that canine scent detection was not hampered by factors such as smoking habits, benign colorectal symptoms, or inflammatory disease. Researchers confirmed that a cancer-specific scent does exist and that these chemical compounds might be circulating in the body. Detecting these cancer-specific scents may serve as an effective tool in screening colorectal cancer in patients.

The Neuroscience of Wellbeing