In this episode, we have deeper insights into the Secret Space Program, with the astonishing disclosures of William Tompkins, our 94-year-old aerospace engineer who is clearly one of the founding fathers of the very Solar Warden program which he named – that same code name – that Corey later worked in.

In the following short interview that we’re going to show you, Tompkins gets into detail about one of the craft designs that he was working on for the Navy.

William Tompkins: So we talked before about the different types. And this is a two-kilometer long spacecraft carrier, and it’s streamlined to a degree. 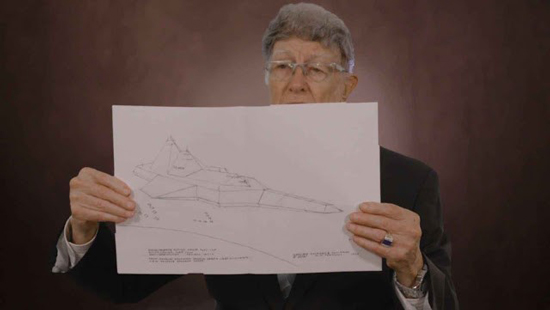 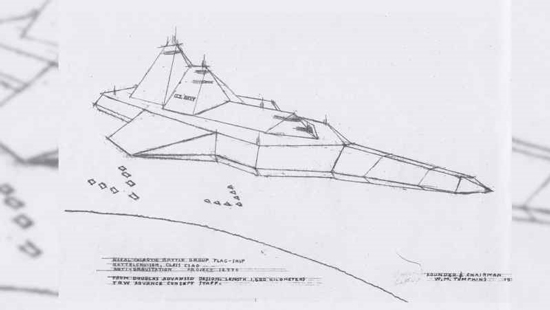 And so I said: “Well, that’s true, but the electromagnetic protection system, which we still are not sure how we’re going to word, may or may not be capable of handling all of the different types of vehicles or weapons that could be… being used on us. And also, under certain conditions, we actually can get into the planet’s atmosphere and operate. So anyway, we got around that one.”

“Now, if you can picture here this area down in here [Bill points to the bottom, center of the craft]… I’m going to switch these, and you’re going to see the lower part of the hull.
And what you see there is the different classes of attack and fighter aircraft returning to the mothership, or the spacecraft carrier, and with a vacuum-controlled entry sections. Actually, they would design to fold down so that you’re already in support of making inside landing.” 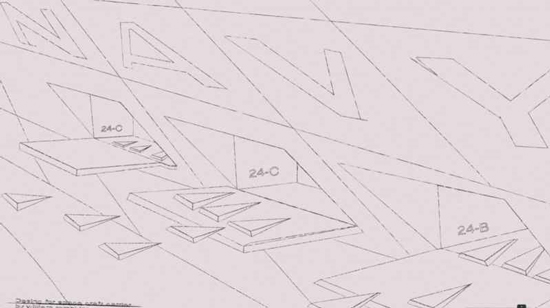 Nobody actually flies in these squadrons controlling any of the vehicles. It’s all automatic, so you’re not going to be hitting the walls or any of this kind of thing.
But very quickly, you can open these hatches on the side. The hatch then becomes sort of a platform to possibly land on if you’re too low. And this answers the question of how do we handle the large spaces aboard the ships that are going to be operating on the missions.

So what we had done then was, using the same type of design concepts, we looked at the Marines’ missions. We looked at the communication missions. We actually came up with virtually hundreds, then, of missions and sub-missions that we then in the tank [think tank] made recommendations back to the Navy themselves.
And one admiral, when he saw that first illustration, he made the statement that just the shape of that’s going to scare them away. They’ll turn around and go back, because it is a pretty hot configuration.

Some of the others are not as good and actually some of them are rectangular, depending on what the mission is required to accomplish.

David: So that’s a pretty technically detailed diagram. And it’s just one of a variety of things that come from this guy who has no financial interest in this. His book didn’t sell very much. He’s just living on a fixed income. And yet, that degree of precision in the art doesn’t seem like it would be coming from somebody who’s trying to make something up. So I’m curious about how similar that looks to anything that you saw?

Corey: That was most likely one of the concept designs that probably got fine-tuned. But there could be a craft that looks like that out there that I hadn’t seen. I didn’t see all of our vessels out there.
Now, that looked very similar to longer, wedge-shaped vessels that I saw that had areas coming up off the top almost like you see on a Navy vessel on the ocean.
And also, it had stealth edges. The corners were very much like the stealth ships that you see – how they curve. 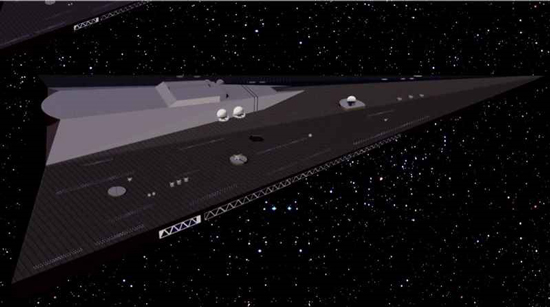 David: Well, and something kind of caught my eye, which is that in his discussions with his superiors on the design, they said: “Oh, you don’t need to worry about aerodynamics. It’s not going through an atmosphere.”
But what I’m thinking of is: “Wait a minute. There’s all this charge that you’ve got to move through even in space. There’s inertia and there’s electromagnetic fields.”
So do you think that part of the reason why everything has an aerodynamic shape is that the basic vacuum energy of space itself has some sort of resistance that you have to cut through when you go through it?

Corey: They don’t all have the aerodynamic shape.

Corey: And as far as moving through charged particles and all this stuff in space, that’s what the material on the outside of the craft and the electromagnetic shielding is for.

David: But in a case like this, for that particular mission, if it’s also going to go through a planet’s atmosphere, it would be good to have some aerodynamic qualities.

Corey: Right. The vessels that travel inside our atmosphere and out are usually going to be somewhat aerodynamic, even though with the propulsion systems they have they are not traveling through the atmosphere per se. They are in a bubble. And inside that bubble, the bubble is traveling.

David: Is there a reason for why stealth technology seems to involve these different flat panels that are kind of arranged at different angles? What’s going on there?

Corey: It deflects radar, lidar, different waves, away from the receiver of the radar or lidar. So how it works is if you send it out and it hits a flat surface that is angled right, it’s going to come back and you’re going to get a report from that wave bouncing back.
If you have sharp angles, then very little of that wave is going to bounce back. The rest of it’s going to be dispersed, and the waves will bounce off, but they’re not going to hit the detector.

David: Well, I know that my insider Pete Peterson described that when the stealth was rolled out for Gulf War I, that it had in fact been mothballed for 20 years and was a very archaic and almost useless piece of technology by that time. Here he’s [Tompkins] doing something in the 1950s that looks like stealth.

Corey: Right. Stealth was being developed soon after the discovery and invention of the radar.
According to insiders the Lockheed SR-71 Blackbird is an example of vastly outdated technology that had been mothballed – but was later hauled out to give the public a glimpse of what their dollars had been used to develop at drastically overcharged rates (with the bulk of the funds being channeled into the SSP’s). By the time the public got to see this – it had been decommissioned junk for decades. 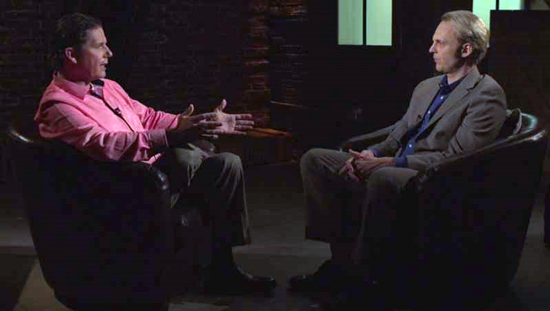 David: Wow! So I noticed in the second image that he showed that you have these very, very large doors, or hatches, as he was calling them, that open up on the side of the craft, and then a lot of little triangular wedges going in.
So what was your feeling when you saw that part of the illustration?

Corey: Well, as far as the doors opening, I had seen elevators that lift aircraft, move aircraft around. But if you have a door opening out, that can cause a lot of logistical problems if you’re in battle or if you are traveling at a high rate of speed.
So usually, they have the doors open like this [side to side], up and down, and not protrude out.

Corey: But if there was another purpose and a need for it, I could see why they would develop it.

David: What about the actual shape of all those craft that were going into the larger craft?

Corey: Yes, that was very familiar. And the fact that he mentioned in these newer vessels or carriers, they do fly drones. They have people all inside [buildings or large craft] sitting in long rows flying drones, and they control a number of drones apiece.

David: So what would this type of craft that he was designing be used for? Is it an attack craft? Is this a support craft?

Corey: It can be offensive and defensive, but usually these craft are designed to be offensive for attacking an enemy.

David: Does the Space Program have any proclivity towards doing an offensive attack on a civilization that they think they could conquer and overwhelm? Or is there also… is it mostly going to be defensive when they’re out there trying to see what’s around and getting attacked?

Corey: Well, it depends on who is in charge of, I guess, the Navy assets at the time. These people follow orders. So if they have a problem with attacking another species, they have to follow orders.

David: Well, in the case of a movie like Avatar, we have a clear example of our own government / military-industrial complex, in what would appear to be the future, having developed a space program, going to another planet with people who are tall and have blue skin, but there was something there that they really wanted, which was this unobtainium. Do you think Avatar is describing something that is actually happening? Are there certain cases where planets are invaded for their materials?

Corey: Well, I do know that certain aspects of the ICC, but especially Dark Fleet, are going out on offensive conquering missions. And they’re doing this alongside the Reptilians.

David: Well, and I do also remember Pete Peterson telling me that many of the craft that you see in Avatar are exactly identical to stuff that he had actually seen or worked on. I’m wondering if any of them look familiar to you when you saw the movie?

Corey: I didn’t witness a whole lot of craft that flew inside of an atmosphere.

Corey: So all of those craft were clearly designed to fly inside of some sort of a dense atmosphere. The craft that I saw were not built to operate in atmosphere.

David: All right. Well, speaking of James Cameron, not only do we have Avatar, he also had that movie The Abyss, where he describes extraterrestrials underneath the surface of the ocean.