Seven Bizarre Conspiracy Theories That Turned Out To Be True 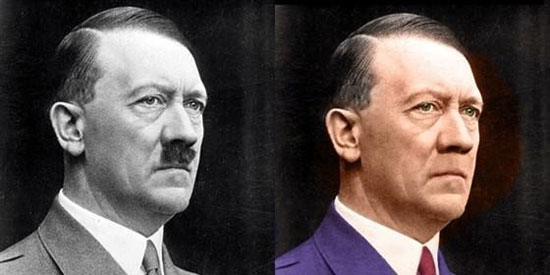 Mainstream media has done their due diligence to slap a label on any news story that doesn’t fit their agenda, which we’ve come to discover is dictated by the world’s elite. Many stories are derided as mere conspiracy theories, ensuring they don’t receive serious consideration and are instead viewed as some sort of backward joke.

Conspiracy theories are stigmatized because people don’t want false news filling up their heads, and how can anyone blame them? Yet, because mainstream media has garnered the reputation of being the go-to for factual information, they have the ability to take possible truths and immediately have them ridiculed and dismissed.

But alternative outlets and powerful people such as WikiLeaks, Edward Snowden, Chelsea Manning, and many unbiased journalists are paving the path to break such stigmas. They are opening people up to the notion that they should decide for themselves whether many of the “conspiracy theories” the mainstream so readily trashes are worth further consideration; to the notion that, in fact, the mainstream may be actively suppressing the truth rather than promoting it.

Here are seven examples of conspiracy theories that proved to be true:

1. U.S. Military Fired 300 Shells at North Vietnamese Torpedo Boats That Weren’t Even There

Sometimes called the USS Maddox incident, the Gulf of Tonkin incident surrounded U.S. involvement in the Vietnam War when the destroyer USS Maddox apparently fired at North Vietnamese Navy torpedo boats as part of an intelligence patrol. Almost 300 shells were shot off. President Lyndon B. Johnson quickly drafted the Gulf of Tonkin Resolution as a tool for providing legal justification for U.S. military intrusion in Vietnam. But that isn’t what actually happened.

In 2005, a declassified internal National Security Agency study exposed the reality that no North Vietnamese naval vessels were even present during the incident. In 1965, President Johnson commented: “For all I know, our Navy was shooting at whales out there.”

Navy pilot James Stockdale disputed the event, as did others present, saying “I had the best seat in the house to watch that event, and our destroyers were just shooting at phantom targets – there were no Vietnamese boats there… There was nothing there but black water and American fire power”.

2. The FBI Harassed Political Groups to Discredit and Smear Them

The book The United States of Paranoia by Jesse Walker states:
“Under COINTELPRO, FBI agents infiltrated political groups and spread rumors that loyal members were the real infiltrators. They tried to get targets fired from their jobs, and they tried to break up the targets’ marriages. They published deliberately inflammatory literature in the names of the organizations they wanted to discredit, and they drove wedges between groups that might otherwise be allied. In Baltimore, the FBI’s operatives in the Black Panther Party were instructed to denounce Students for a Democratic Society as ‘a cowardly, honky group’ who wanted to exploit the Panthers by giving them all the violent, dangerous ‘dirty work’. The operation was apparently successful: In August 1969, just five months after the initial instructions went out, the Baltimore FBI reported that the local Panther branch had ordered its members not to associate with SDS members or attend any SDS events.”

As for Dr. Martin Luther King, agents tried to instill paranoia by way of following him, bugging his hotel rooms, attempting to break up his marriage, and even sending him an anonymous letter in hopes of getting him to commit suicide.
The truth behind the conspiracy theory came to light when a group of eight anti-war activists broke into an FBI field office in 1971 and discovered documents that exposed the program.

The Joint Chiefs of Staff of the U.S. military created and approved a plan called Operation Northwoods that would allow for acts of terrorism on U.S. soil in order to brainwash Americans into supporting a war against Cuba. With the documents out there to prove the immoral and disgusting plan, it’s impossible to label it a conspiracy theory.

President Kennedy ultimately rejected the plan that involved the killing of innocent Americans by shooting them on the streets, sinking boats carrying refugees fleeing Cuba, violent terrorism to be executed in Washington, D.C., Miami, and more, framing people for bombings they did not commit, and planes being hijacked.
The documents noted: “We could develop a Communist Cuba terror campaign in the Miami area, in other Florida cities and even in Washington. We could sink a boatload of Cubans on route to Florida (real or simulated). Exploding a few plastic bombs in carefully chosen spots, the arrest of Cuban agents and the release of prepared documents substantiating Cuban involvement also would be helpful in projecting the idea of an irresponsible government.”

4. The CIA Bought Influence and Control among the Major Media Outlets

Beginning in the 1950s, with the Cold War well underway, the Central Intelligence Agency devised a plan called Operation Mockingbird that sought to connect with top American journalists in order to influence public opinion and ultimately gather intelligence. The program went on for almost three decades. The Church Committee eventually exposed the majority of the program.

A full report from Congress reveals: “The CIA currently maintains a network of several hundred foreign individuals around the world who provide intelligence for the CIA and at times attempt to influence opinion through the use of covert propaganda. These individuals provide the CIA with direct access to a large number of newspapers and periodicals, scores of press services and news agencies, radio and television stations, commercial book publishers, and other foreign media outlets.”

5. The CIA Ran Secret Mind Control Experiments on U.S. Citizens from the 1950s which is still going on

A CIA program called MK-Ultra was a plan devised to develop biological and chemical weapons capability during the Cold War, but it was revealed that the program became much bigger and more shockingly disturbing than just that.
The CIA ended up using the plan as a means to take advantage of drugs, electronics, hypnosis, sensory deprivation, verbal and sexual abuse, and torture to conduct experimental behavioral engineering experiments on subjects. The program made its way into 80 different institutions including universities, hospitals, prisons, and pharmaceutical companies.

CIA Director Richard Helms had the majority of the MK-Ultra files destroyed in 1973, and much of what occurred during these experiments remains unknown. Not one person was brought to justice. According to the Church Committee, at least two American deaths can be attributed to this program.

In 1995, President Clinton issued a formal apology on behalf of the U.S. government for the MK-Ultra program.

6. Adolf Hitler Did Not Die In WWII

A rumor began circulating that Nazi leader Adolf Hitler did not commit suicide in Berlin in 1945, but actually ended his days in Argentina after escaping the war.
At first this was met with extreme doubt and controversy, until the evidence began coming forward. The first piece of evidence was the documents that illustrate the FBI knew about the truth entire time, yet the lie perpetuated through history books and so forth. This document can be seen on the FBI’s own website.
It outlines knowledge of Hitler escaping via boat and landing in Argentina where it is believe he spent his remaining days here on Earth. 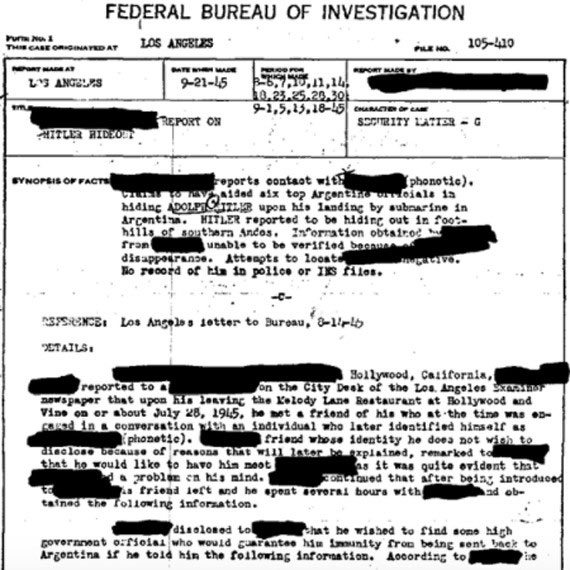 To further illustrate this we can turn to British journalists Gerrard Williams and Simon Dunstan. In their book Grey Wolf: The Escape Of Adolf Hitler, they claim they have discovered overwhelming amount of evidence “to suggest Hitler died an old man in South America”.
The book claims that Hitler lived in Argentina for 17 years and could have been raised two daughters before he died in 1962.

They also claim that the Hitler skull fragments which are previously used to confirm his death of a gunshot wound to the head are actually that of a young woman and the scientific records now confirm that.
“We didn’t want to re-write history, but the evidence we’ve discovered about the escape of Adolf Hitler is just too overwhelming to ignore”, Williams told Sky News.
“Stalin, Eisenhower and Hoover of the FBI all knew there was no proof of him dying in the bunker”, Williams added.

Prior to Edward Snowden (the former NSA employee who leaked classified information), if you told somebody you thought there existed what seems to be a separate civilization – a part of humanity that broke off in secret, and is thousands, if not millions, of years more advanced than the mainstream academic/scientific/technical world – there is absolutely no doubt you would have been brushed off as a crazy conspiracy theorist.
But when Snowden leaked the very first documentation proving the existence of clandestine black budget operations, that all changed. Despite these recent leaks, many are still unaware of the black budget world, and the fact that it had been investigated and talked about before these leaks.

“In the councils of government, we must guard against the acquisition of unwarranted influence, whether sought or unsought, by the military industrial complex. The potential for a disastrous rise of misplaced power exists, and will persist. Only an alert and knowledgeable citizenry, can compel the proper meshing of the huge industrial and military machinery of defense, with our peaceful message and goals.” – Dwight Eisenhower, Former Five Star General and President of the United States.

Why Is This Important?

So why do need to know this? When we begin to think that so much about the world we live in is completely backwards to the truth, we begin to realize we don’t really know the true nature of our reality. We begin to ask questions about our lives, everyday lifestyles, the systems and structures we live under and what’s holding us back from creating a better world. Through this questioning we learn more about how things really work and what it will take to move forward.
We learn that a transformation in our perception and seeing through the illusion in front of us will empower us to make different choices that lead to the removal of such manipulative leaders, systems and infrastructures. But we cannot remove them and create a better world if we don’t even know they are there. The awareness is the first step to changing within.

The 10 Primary Directives of Mainstream Media