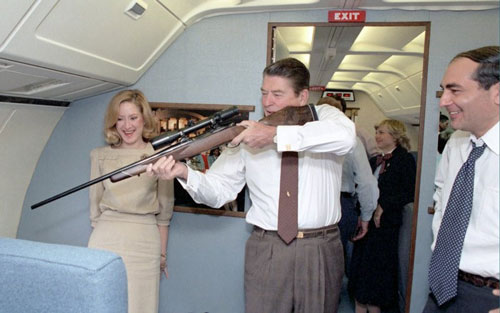 Shadow World is a new film which chronicles America’s role in the international arms trade.

In the months after the September 11 attacks, a horrified Wesley Clark recalls in the new documentary Shadow World, long-gestating plans to enact “forceful regime change” overseas that had percolated during George H.W. Bush’s administration resurfaced under the younger Bush’s presidency. The four-star general and former NATO commander had first heard the plans in 1991 or 1992 from Paul Wolfowitz and Dick Cheney, who were pitching a new American strategy to Washington. In November 2001, he tells director Johan Grimonprez he recognized it in a classified memo detailing a five-year plan to “go after” problem countries – specifically Iraq, Syria, Lebanon, Libya, Somalia, Sudan, and Iran.

Clark’s rear-view revulsion makes for one brief but memorable moment in Shadow World, a dense and impassioned documentary detailing how American politicians and their allies have been in bed with the arms industry for decades. The net effect, the film argues, is one eternal, self-perpetuating war that’s taken Americans from the Reagan administration through Obama, fueled by greed, corruption and an endless string of shady Saudi deals.

Grimonprez opens the film on scenes from World War I, recounting the famous tale of a Christmastime peace between enemies in the trenches that ended when generals decided they’d had enough goodwill between men. Based on Andrew Feinstein’s book The Shadow World: Inside the Global Arms Trade, the film weaves a timeline tracing the gradual corporatization of war going back decades to Reagan’s dealings with Margaret Thatcher and the $87 million slush fund used by British arms manufacturer BAE to wine and dine Saudis in deals that left officials like Saudi Arabia’s ambassador to the United States, Prince Bandar bin Sultan, reportedly £1 billion richer.

One arms dealer, Riccardo Privitera, revels in the memory of the lucrative deals he sealed with military officials by greasing the wheels with cash and women. “With $60,000, I signed a contract worth $3 million” he boasts “so it wasn’t a bad deal”. Bribing politicians, he says comparing them to prostitutes, can be pricey. But “at the end of the day, they do what they’re told.”

Shadow World blends interviews with archival news footage and stunning scenes that underscore the human costs of these wars – drone attacks, bodies blown to bits, scenes of immediate terror and carnage. It emphasizes the overlapping of Cheney’s political career and Halliburton tenure as a turning point in the privatization of arms in America. “What we’ve essentially done is create a network of corporations that have the firepower of small nation-states that could overthrow some small governments around the world” says Dirty Wars author Jeremy Scahill.

As he’s been doing for a decade, retired U.S. Army Col. Lawrence Wilkerson, former chief of staff to Secretary of State Colin Powell, condemns the intel that led Powell to recommend war with Iraq in 2003. “We were indisputably lied to” he says. Rep. Cynthia McKinney describes the death threats she received after challenging Secretary of Defense Donald Rumsfeld on $2 trillion missing from the Department of Defense’s ledgers: “That’s what happens when you go against the big boys.”

Also interviewed in the documentary are David Lawley-Wakelin, the British documentary filmmaker who crashed the 2012 Leveson inquiry to call Tony Blair a war criminal, and Muntadhar al-Zaidi, the Al-Baghdadia TV journalist who threw his shoes at President Bush during a 2008 press conference to show the world not all Iraqis welcomed the American invasion with flowers.

Chris Hedges, the veteran foreign correspondent reprimanded by The New York Times for speaking out against the Iraq war, offers an emotional perspective on who’s really paying for the true costs of war. “How can you come out of Gaza and not be angry at what’s being done to these people? How can you come out of the Sudan, El Salvador, dozens of other places, and not be angry? I’ve seen the bodies of a lot of children which I can’t forget.”

How stress affects the brain