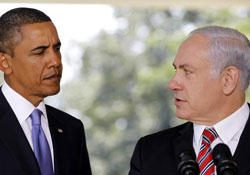 Israeli police started to investigate Prime Minister Benjamin Netanyahu just days after he announced he was to declassify 400,000 documents that would reveal a child sex trafficking ring in Washington D.C., in late December 2016.

Netanyahu had warned Barack Obama that he was willing to release the documents that would potentially damage some very powerful people in Washington following the U.S. President’s abstention from the U.N. Security Council on December 23. On that day, the United Nations Security Council has adopted a landmark resolution demanding a halt to all Israeli settlement in the occupied territories, after the U.S. administration refused to veto the resolution. A White House official said Obama had taken the decision to abstain in the absence of any meaningful peace process.

After the warnings, the Israeli PM did release the documents, on December 28, after the police investigation against him, regarding corruption, had started. Netanyahu said in a statement regarding the previously classified documents: “From now on, with one touch of the keyboard, everyone will have access to the documents and can trace what happened to the children.” However, no clear connection could be done yet between the documents and a pedophile ring in Washington.

The Jerusalem Post reported that “Israel made public for the first time some 400,000 pages of documents related to the fate of the missing Yemenite children of the 1950s”, something Prime Minister Benjamin Netanyahu said was meant to “correct the historical injustice” of hiding the fate of the children.

“It is difficult to believe that for almost 70 years, people did not know what happened to their children” Netanyahu said. “And as difficult as the reality may be, we are not willing for this to continue.”

Netanyahu’s comments came at a ceremony in the Prime Minister’s Office, where a website was launched with the documentation about the children.

The documents are those that three inquiry committees had at their disposal over the years in investigating the case of the missing children – in 1967, 1988, and 1995.

In June 2016, Netanyahu appointed Regional Cooperation Minister Tzachi Hanegbi to reexamine the evidence in the three previous inquiries, and in November the cabinet decided to release the classified documents. This decision overturned a 2001 decision to seal the documents until 2071.

During the early days of the state, from 1948 to 1954, hundreds of babies and toddlers of families of Mizrahi descent, mostly from Yemen, mysteriously disappeared during the massive wave of immigration at that time. In the vast majority of cases, parents were told in the hospital that their children had died, though they never received any official confirmation.

Over the years, families have claimed that their children were in fact kidnapped and given away or sold off to Ashkenazi families. The archives opened some 3,500 case files which contained original background materials collected by the committees, including hospital records, death certificates, photos and personal testimonies.

As such, the collection includes some 1,248 documents regarding hospitalization of the missing children, 1,226 death certificates, 923 burial records, 202 records of surgery following their deaths and 358 birth certificates.

Despite the massive amount of documents released, the majority of families still did not receive closure or new information regarding the whereabouts of their lost family members. Still, the opening of the case files was hailed as a major win and a step forward toward acknowledgment of the affair.

At the ceremony on December 28, Yitzhak Hanegbi, a prominent Israeli politician and national security expert, termed the release of the documents a “big day to correct a big injustice.”

“The reason this is happening now”, he said, “is that we feel a moral need to reveal the truth.”

Hanegbi acknowledged that the matter was a trauma that haunted families for decades, and expressed hope that transparency on the matter will help people reach closure. “Hopefully, this will give some relief to the families” he said.

As for the reasoning behind the decision to make the documents public, Hanegbi said that the prime minister asked him to review them and that he found no justification for keeping them classified. “Now, every citizen, journalist, family member or historian can look at all the details and choose the way he will perceive it” he said.

Hanegbi denied that there was any organized effort by the government to take children away from their parents, but said that information does not make the matter any less painful for the families. “The committee that tried to find a solution, for this issue came out with the understanding that most of the children did die in hospitals” he pointed out. “But the fact is that 1,000 children disappeared without graves, a reason of death, a funeral or a body.”

As for those who lived, Hanegbi called for the establishment of a DNA bank. He posited that at this point, nearly 70 years since the children disappeared, people who think they may have been adopted no longer have to fear insulting their adoptive parents, since they are probably no longer alive, and may be more willing to give DNA samples and find their long-lost relatives.

Knesset Science and Technology Committee chairman Uri Maklev (United Torah Judaism) proposed a bill to create a genetic database to help solve more of the mystery. “Without genetic information, we will not be able to take the next step and unite parents, children, and siblings” he said.

Justice Minister Ayelet Shaked said that the affair “symbolizes for whole generations of Israeli citizens a phenomena of neglect, discrimination, and racism. It is an open wound for whole families.” With the opening of the database, Israel is showing it can no longer hide the findings, she added.

Shaked said that the legal situation was complex, but that a solution was found to give maximum information to the public while protecting individual privacy in the case of adoption. 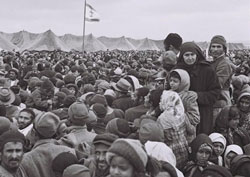 MK Eitan Cabel (Zionist Union), who is of Yemenite descent, said, on December 28, 2016: “Today is a great day of hope for many families in Israel, and I am full of hope that opening the archives will bring relief to the families and help them get answers to the many questions that remained open and were an open wound to this day.”

President Reuven Rivlin also commended the government on opening the State Archives: “This has been a heavy burden on Israeli society and it should have been dealt with years ago.” He expressed the hope that families and the rest of the country would now be able to learn what happened to the missing children.

Shortly after the Israeli Prime Minister announced his plans to declassify the documents, Israel announced they were to investigate Netanyahu for corruption for accepting gifts from businessmen.

Fox News reported: “A black screen was placed in front of Netanyahu’s official residence in apparent anticipation of the investigators’ arrival and to obstruct the view of journalists seeking to film them.”

Netanyahu has denied what he calls “baseless” reports that he received gifts from businessmen. Speaking at a meeting of his Likud faction right after the investigation started, Netanyahu again denied allegations of wrongdoing.

“We’ve been paying attention to reports in the media, we are hearing the celebratory mood and the atmosphere in the television studios and the corridors of the opposition, and I would like to tell them, stop with the celebrations, don’t rush” he said. “There won’t be anything because there is nothing.” 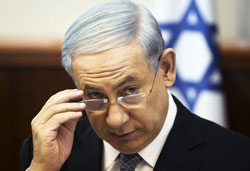 Israel’s Channel 2 TV has reported that Netanyahu accepted “favors” from businessmen in Israel and abroad, and is the central suspect in a second investigation that also involves family members. It said a criminal probe is expected soon.

Israel’s Justice Ministry and police have declined to comment on the media reports.

A campaign is underway by Erel Margalit, an opposition lawmaker of the Zionist Union party, for Netanyahu to be formally investigated over suspicions of prominent donors improperly transferring money for Netanyahu’s personal use, as well as reports that Netanyahu’s personal attorney represented a German firm involved in a $1.5 billion sale of submarines to Israel.

Netanyahu was reportedly questioned under police caution three times as part of the inquiry. He is expected to be interviewed once more before the probe closes, which is expected to happen in the end of March 2016. According to a report by The Independent „Police is ‘likely to recommend’ indictment of Benjamin Netanyahu on corruption charges.”