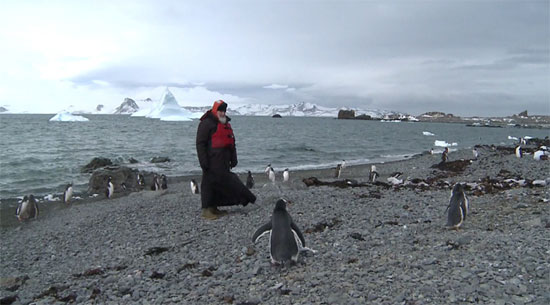 In the last few months of 2016, news leaked of world political and religious leaders heading off to the Antarctica. According to Steve Quayle, author of Empire Beneath the Ice, people should take notice of what is really going on there, “What really is going on down there? Here is the billion dollar question, and probably the trillion dollar question: Why are the world’s religious leaders and the world’s most powerful leaders going to Antarctica? I don’t think the Russian Patriarch Kirill is going down there to meet penguins, with no disrespect meant. Someone or something has summoned the world’s leaders.”

Moreover, he adds, “Most people don’t understand, and this is critical, the United States, in 1947, sent a war flotilla to the Antarctic under Admiral Byrd and it was called ‘Operation Highjump’. It was to seek out and destroy the hidden Nazi bases that intelligence agencies provided them the documentation for. It wasn’t a small thing. There were 13 ships and 4,700 men and state of the art U.S. weaponry. The bad news is we got our rear ends kicked. Russians were spying on us, and they had a video of our aircraft encountering flying saucers.”

Quayle goes on to say “Black physics is beyond the PhD level, and we are seeing this with CERN (European Council for Nuclear Research). What is so critical for people to understand is, as more activity takes place at CERN, the occult rituals associated with it are so in your face you can’t dismiss this stuff anymore as being the ranting’s of this fringe or that fringe. Something is happening, and the Antarctic is critical. It’s my contention that because of the advanced technology of the Third Reich that they went under the ice, so to speak, and came into contact with beings, sentient beings that Wernher von Braun and others have made reference to many times before they passed away. So, all this is a matter of record. When you put all the records together, it points to this: There is some entity or group of entities that are thinking and have advanced technology and, basically, give orders to the religious and political leaders of our day.

The history of the world is not what it is. It is what the powers that be pretend it to be. For the record, all of the world’s leaders never believed that Hitler died in the bunker.”