Silicon Valley and the Pentagon, The Pioneers of Biological Warfare 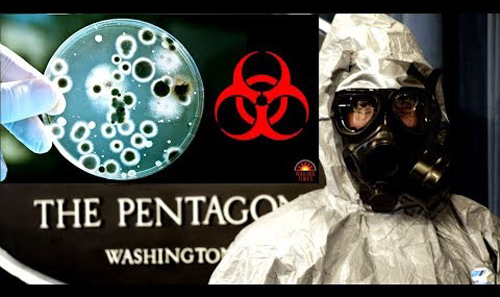 The future of warfare is guaranteed if the Pentagon and Silicon Valley technocrats have any say.

With government promises to counter ISIL without a centralized command on the complicated battlefields of Northern Iraq or Syria, which arguably, the U.S. government helped to create, what technologies will ensure that 69 cents of every stolen tax dollar will continue flooding into war profits?

If you complete a successful airstrike, ISIL fighters usually just migrate somewhere else. Is tried and true technology even the answer to “ending war” as is so often promised?

Former Secretary of Defense, Ashton Carter, gave us a hint in an interview from 2017, with Wired.

“I think if there is going to be something ever that rivals nuclear weapons in terms of the pure fearsomeness of their destructiveness it’s more likely to come from biotechnology than any other technology. Looking back decades from now, I do think the biological revelation could rival the atomic revolution for the fearsomeness of the potential. I think that’s one reason we need to invest in it. And although biotechnology has not been a traditional area for Defense, the new bridges that they build should not only be to the IT tech community but also to the biotech communities in the Valley.”

In fact, the Valley has been creating advanced sensors to combat their own weapons of germ-fare for decades now. They don’t seem to care about harming the population in “tests” of their advanced germ technologies either. The military industrial complex with technocratic support has done this for more than 70 years.

The people of San Francisco were exposed to biowarfare tests in the 1950s when a Navy Ship sprayed microbes into the air from a giant hose just off the coast. The germs were tested on a population of 800,000 without their knowledge or consent. An additional 239 tests were conducted in the region.

Biowarfare is known as the “poor man’s atomic bomb,” since it can be developed and dispersed with a much lower capital investment than in nuclear weapons or trillion-dollar bombers. This type of biowarfare is complicated, though.

As Gregory Koblentz, a professor in public policy at George Mason University in Virginia argued, in sharp contrast to nuclear weapons seen from a strategic perspective, biological weapons have features that complicate international security strategy.

He noted that this is true particularly due to the “multi-use” nature of the biological agents and their precursors, as well as the necessity for secrecy in protecting biological weapons programs. After all, if the ‘enemy’ knows what kind of germs you are brewing, they could rather easily create an antidote, making your weapon obsolete.

The ambiguity of these bioweapons programs should not be lost on the average American. A defensive biological weapon could be used just as easily on civilians, and the military has already shown it has tested these agents on its own population.

An article titled, Part One: Bush and 9/11 Using Explosives, Part Two: Rockefellars And a Coup, Using Bioweapons, questioned why FEMA and the Department of Homeland Security have been venturing down into the subway systems over the last couple of years. Some suggest they could be completing recon to poison on water systems. We’ve already been poisoned with fluoride with no good explanation, it isn’t so far-fetched to consider what other toxins might be used against an unsuspecting public.

In other recent events from 2017, a light bulb in a New York Subway system was filled with bacteria and shattered contaminating an area from 14th to 58th Street, and the Midwest has been contaminated with bacteria which was sprayed by plane that affected areas as much as 1,200 miles away in just a few days.

By their own admission, Silicon Valley biotech companies have been working with the Pentagon to create new forms of bio-terror, and even Tesla’s Model X has a bioweapons defense system. An inside hunch? Or is something else going on with the technocrats deciding US future foray into warfare?