In 1898 while clearing a field in Kensington Minnesota Olaf Olman unearthed what quickly became known as the Kensington runestone.

The table slab sized rock was covered with Nordic ruins whose translation dated it at 1362. Dozens of witnesses claim the stone was wrapped in the roots of a Poplar tree that had been there for years and multiple geologists examined the engravings and said the inscriptions were weathered in the same manner as the stone.

The inscriptions were later translated to read: “Eight Goths and 22 Northmen are on this acquisition expedition from Vinland far to the West. We had traps by two shelters one day’s travel north from this stone. We were fishing one day. After we came home I found ten men red with blood and dead. Avé Maria deliver from evils! I have ten men by the inland sea to look after our ship, fourteen days’ journey from this island Year 1362.” 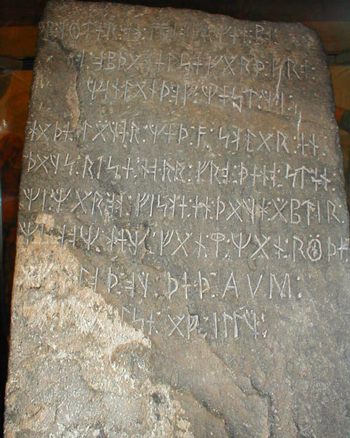 The furor the Kensington Runestone created during the ensuing century among the academic community almost defies description. Olman’s family was destroyed and his daughter driven to suicide.

“Scholars” tripped over each other falsifying documentation. With little to no referencing thirty-two “experts” in Scandinavian linguistics declared the Kensington Runestone inscription fraudulent. They were led by Erik Moltke, the official Runologist of the Danish National Museum, who called them an “abortion.”

Minnesota Archeologist R.H. Landon had the stone coated with engine oil and scrubbed with a powerful solvent attempting to “clean” it. In an effort to caste disparagement on the Kensington Runestone itself Dr. Kari Ellen Gade now a professor of Germanic Studies at Indiana University and 4 other Graduate students perpetrated their own hoax near the Kensington Runestone Park.

Theodore C. Blegen of the Minnesota Historical Society invented a deathbed confession ostensibly proving that Olaf Olman a man barely staving off poverty with 36 weeks of education and nine children forged the stone himself.

All of this occurred in spite of the fact that N.H. Winchell the state geologist of Minnesota, along with the state geologist for Wisconsin, verified the inscriptions antiquity as early as 1909-1910. They were ignored and marginalized in favor of primitive academic pseudo sciences.

The Geological evidence is overwhelming but it always seems to be legal experts that must conclusively explain to academia that physical evidence and not their theory’s are what’s important in figuring out how past events transpired.

Richard Nielsen and Scott Wolter are both acknowledged expert witnesses in court cases involving construction failure. Nielsen felt the controversy would be settled once and for all by examining the petrographic data. He hired Wolter a renowned independent court expert in forensic geology to examine the runestone using the high-tech microscopy that is used to examine the forensics of failed concrete in legal decisions.

The results were conclusive and confirmed the antiquity of the runestone’s inscriptions.

Wolter found that 3 of the R runes on the stone have dots. Similar R’s with dots are found in Sweden on medieval gravestones although dotted R’s in medieval runic inscriptions were not known to exist until 1935.

Wolter then went to the source, the Cistercian monasteries on the Island of Gotland in the Baltic Sea off the coast of Sweden. There he found gravestones with the dotted R’s that were dated 1449.

The date on the runestone is verifiable through the Easter Table. This was a secret authentication technique practiced by Cistercian scribes where some runes were accentuated so they can be checked on a chart of corresponding calendar dates called the Easter table.

The date that is given in the runes is verified when it is the same as the one given through the Easter table code. The Kensington Runestone has crosses through the staves on 3 of the runes that should not be there .When checked against the table the 3 runes give a date of 1362.

Scholars strenuously objected to the two dots punched above some of the runes known as umlauts. Umlauts denote a runes pronunciation, such as the dots above the hooked X on the Kensington Runestone that denote its pronunciation as an A.

It was believed umlauts were not used in medieval runic inscriptions but Richard Nielsen pointed out no less than eight uses of umlauts in the Codex Runicus, a Nordic manuscript from the year 1300.

The umlauts and the hooked X’s both surfaced in the Larson Papers published in 2004 along with seven of the other rare runes used on the stone. The Larson Papers are Masonic ciphers allegedly written down in 1883 and 1885. The hooked X is also found on Roslyn Chapel which was completed in 1486. 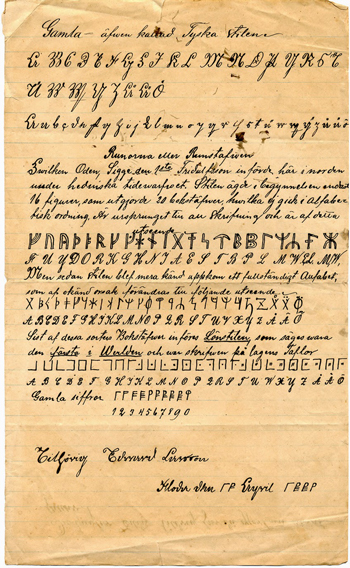 Roslyn Chapel is acknowledged to be a shrine to the Templar’s and is an esoteric legacy to the modern Free Masons. Its enigmatic stone carvings include corn and agave cactus, found only in the New World. The carvings on the 215 blocks found along the pillars and arches inside bare an uncanny resemblance to the block writing of the Maya. Many of its carved figures are similar to Mesoamerican art.

Another runestone was found in Upernavik on the coast of Greenland in 1824. The Kingittorsuaq runestone details a Norse journey to Greenland and was double dated to 1314 using the Easter Table method. Mysterious holes are drilled into large rocks interspersed around both the sites of the Kingittorsuaq and the Kensington Runestone.

The holes appear to be post holes for ship moorings and the Kensington Runestone makes reference to an island and an inland sea.

Tom Trow the past archeologist for the Minnesota historical Society claims there is no evidence that water levels were that high. Unless of course someone should happen to notice the 11,842 lakes that dot the “land of 10,000 lakes” which is what people call Minnesota.

In Corona, South Dakota the same type of holes are also found near carvings of a Norse drinking Horn and a Dagger. Pitted out feldspar along the carved surface area prove the antiquity of the carvings.

It is known that that the Norse reached Nova Scotia in 1398 but apparently so did the Scots. The area inland of Nova Scotia was populated by a tribe called the Mi’kmaq who have a “legend” about a man called Glooscap who came from the East on the backs of Whales, a century before Columbus.

The Zeno Narrative states that Henry Sinclair, Prince of Orkney, led an expedition from the Orkney Islands westward to an unknown land in 1398 AD.

The Zeno Narrative states that Sinclair took with him the latest of cannonry and a cannon was found at Louisburg Harbor, Cape Breton, Nova Scotia, in 1849. The cannon dated back to the late 1300’s. It is even known that the Mi’kmaq’s were playing a primitive game of hockey, a European game, called Shinny prior to European contact and held the cross in reverence.

Beatrice M. Hay in the December 30, 1927 edition of Canadian National Railways Magazine remarked that missionary’s believe the Mi’kmaq may have learned of Christianity from earlier Viking visits.

The Mi’kmaq flag is identical to a Templar battle flag and both resemble depictions of the Crab nebula’s birth in Chaco Canyon. 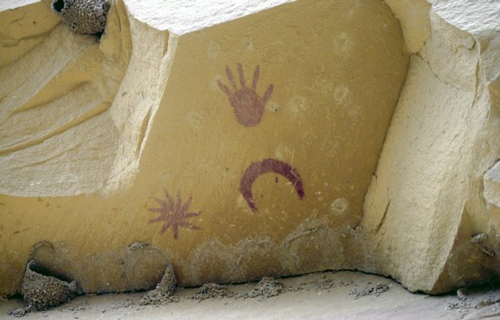 There is a preponderance of archeological evidence that well before the voyage of Columbus Europeans landed and at least built temporary settlements on the Northeastern shoreline of America.

Carved into a glacial boulder on the highest hilltop in Westford, Massachusetts, is the hilt of a sword which some claim is all that is left visible of what was once the image of a Knight and the family crest of the Gunn’s. The shrine was placed there to commemorate the death of Sir James Gunn chronicled in the Zeno Narrative to have died during Prince Henry Sinclair’s voyage. The “Westford Knight” has not been dated but its placement is on a pre European path “used by the Indians.”

Most controversial of all perhaps because they verify the slaughter chronicled in the Kensington runestone are the Spirit Pond Runestones. Discovered in Phippsburg, Maine in 1971 the actual dates of the carving and the interpretations are still disputed by scholars but its eastward orientation is according to a little known medieval practice of orientating maps towards Jerusalem.

Its hooked X, its dating according to the Easter table method and its resemblance to the Kingittorsuaq make the Spirit Pond Runestone difficult to dismiss as a hoax. It’s map points south and its inscription reads Vinland two days journey.

Following the stones directions we come to Pojac Point in Narragansett Bay and find more runic inscriptions baring the hooked X carved on a two ton boulder that is underwater most of time but visible at extreme low tide for 20 minutes a day.

The Narragansett Runestone was discovered in 1984 by clam diggers. Six hundred years ago at the time of Sinclair’s voyage it would have acted as a signpost for sailing vessels because the shoreline was 200 feet further out placing it right above the high tide line. In this case the smoking gun lies just across the bay in Newport Rhode Island.

In the heart of Newport on Mill Street sits the Newport Tower. The Tower was noted by Verrazano as a Norman Villa on maps recording his exploration of the New England Coast in 1527. It is also depicted on Gerardus Mercator’s great world map of 1569. “Scholars” have made the claim for years that it was built by Benedict Arnold the first and modeled after a windmill in Chesterton England, “his hometown.”

Throughout the years there have been numerous attempts to ascertain the towers actual age. Adjusted dates for the Carbon dating of the mortar and excavations around it indicates work was done on it in the sixteenth century but readings nearer its foundation indicate a thirteenth century date for its actual construction.

The Windmill has six arches supported by six pillars while the Tower has eight arch’s supported by eight pillars in accordance with the traditional Templar method of constructing churches. Circular patterns of red discolorations in the clay around the Tower would indicate that it would have had an ambulatory, just like Templar churches but unlike the windmill.

On the winter solstice at 9AM the sun shines through the south window and illuminates an egg shaped keystone within the tower. The cosmic egg would indicate Goddess worship, the foundation of esoteric mysticism and Templar “mythology.” 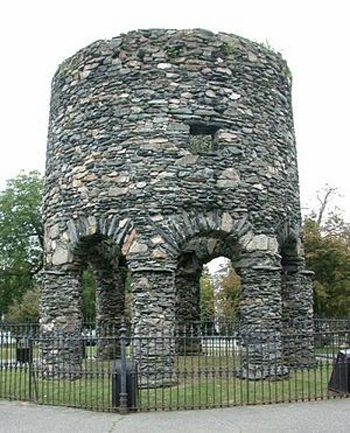 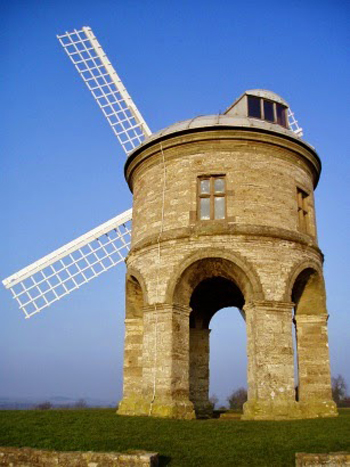 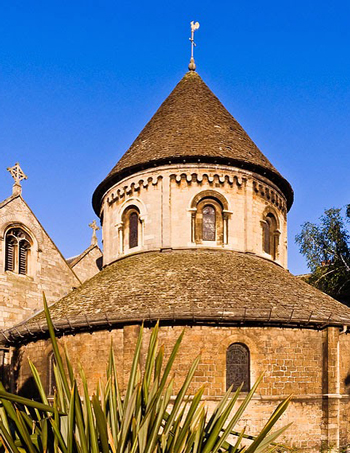 The Round Church. Its original construction dates back to 1130.

America makes its first public appearance on the 12 piece map of Martin Waldseemüller in 1507. The map caused quite a stir in Europe since it depicted America as a strip of land separated from Europe by the Atlantic and Asia by the pacific.

At the time the discoveries of Columbus, Vespucci, and others were still thought to be in parts of Asia. According to Wikipedia Waldseemüller had “a leap of intuition that was later proved uncannily precise.”

Waldseemüller also raised a few eyebrows when he named the new land America after explorer Amerigo Vespucci ignoring both Columbus and the accepted method of naming places after peoples last names.

The ensuing controversy caused Waldseemüller to change it to Terra Incognita in the second printing but the cat was already out of the bag and the New World would henceforth be called America.

In Templar mythology Merica is the western star toward which Knights ride and ships sail. It is the name of the 5 pointed star of Ishtar the Babylonian Goddess and it is the star followed by Prince Sinclair to the shores of the New World.

Hitler called his personnel touring train America perhaps because he too was in awe of Amerigo Vespucci’s accomplishments just like Wikipedia claims Waldseemüller was.

PIZZAGATE: Why it was exposed just before the 2016 election