An elegantly simple experiment with floating particles self-assembling in response to sound waves has provided a new framework for studying how seemingly lifelike behaviors emerge in response to external forces. 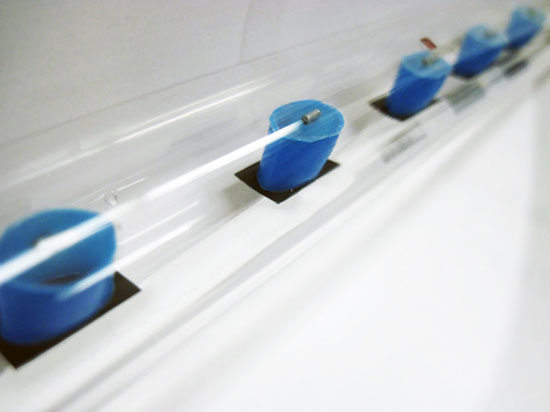 Close up photograph of the self-assembling particles in the clear acrylic tube. These particles consist of cut plastic straws (blue) sealed to a flat plastic chip (black), which float on top of a water-glycerin solution.

Scientists at the Department of Energy’s Lawrence Berkeley National Laboratory (Berkeley Lab) demonstrated how particles, floating on top of a glycerin-water solution, synchronize in response to acoustic waves blasted from a computer speaker.

The study published on June 19, 2017 in the journal Nature Materials, could help address fundamental questions about energy dissipation and how it allows living and nonliving systems to adapt to their environment when they are out of thermodynamic equilibrium.

“Dynamic self-assembly under non-equilibrium is not only important in physics, but also in our living world”, said Xiang Zhang, corresponding author of the paper and a senior faculty scientist at Berkeley Lab’s Materials Sciences Division with a joint appointment at UC Berkeley. “However, the underlying principles governing this are only partially understood. This work provides a simple yet elegant platform to study and understand such phenomena.”

To hear some physicists describe it, this state of non-equilibrium, characterized by the ability to constantly change and evolve, is the essence of life. It applies to biological systems, from cells to ecosystems, as well as to certain nonbiological systems, such as weather or climate patterns. Studying non-equilibrium systems gets theorists a bit closer to understanding how life – particularly intelligent life – emerges.

However, non-equilibrium systems are complicated and hard to study because they are open systems, Zhang said. He noted that physicists like to study things that are stable and in closed systems. 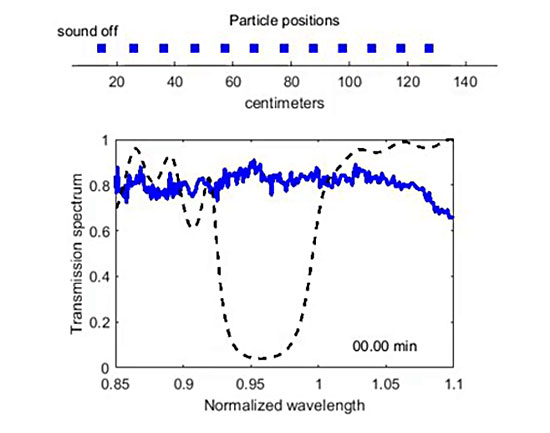 Transient response of dynamic self-assembly. Top portion shows the position of the particles (blue) while they self-assemble in response to sound that is incident from the left. Bottom portion shows the time response of the transmission spectrum of the system (blue), which is compared to theoretical spectrum (black). The red line denotes the wavelength of the monotone input sound.

“We show that individually ‘dumb’ particles can self-organize far from equilibrium by dissipating energy and emerge with a collective trait that is dynamically adaptive to and reflective of their environment”, said study co-lead author Chad Ropp, a postdoctoral researcher in Zhang’s group. “In this case, the particles followed the ‘beat’ of a sound wave generated from a computer speaker.”

Notably, after the researchers intentionally broke up the “particle party”, the pieces would reassemble, showing a capacity to self-heal.
Ropp noted that this work could eventually lead to a wide variety of “smart” applications, such as adaptive camouflage that responds to sound and light waves, or blank-slate materials whose properties are written on demand by externally controlled drives.

While previous studies have shown that particles are capable of self-assembly in response to an external force, this paper presents a general framework that researchers can use to study the mechanisms of adaptation in non-equilibrium systems.

“The distinction in our work is that we can predict what happens – how the particles will behave – which is unexpected”, said another co-lead author Nicolas Bachelard, who is also a postdoctoral researcher in Zhang’s group.

As the sound waves traveled at a frequency of 4 kilohertz, the scattering particles moved along at about 1 centimeter per minute. Within 10 minutes, the collective pattern of the particles emerged, where the distance between the particles was surprisingly non-uniform. The researchers found that the self-assembled particles exhibited a phononic bandgap – a frequency range in which acoustic waves cannot pass – whose edge was inextricably linked, or “enslaved”, to the 4 kHz input. 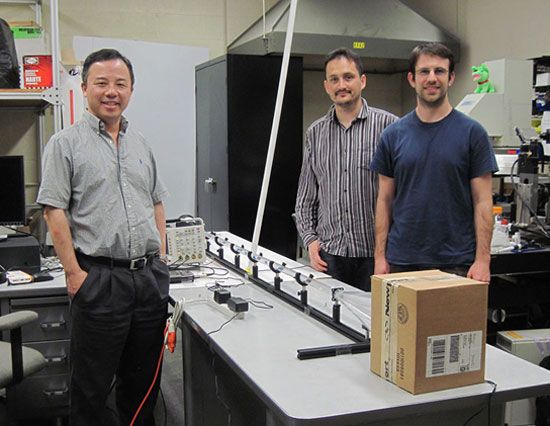 Xiang Zhang, Nicolas Bachelard, and Chad Ropp (left to right) stand next to their experimental setup for testing particle response to acoustic waves.

“This is a characteristic that was not present with the individual particles” said Bachelard. “It only appeared when the particles collectively organized, which is why we call this an emergent property of our structure under non-equilibrium conditions”.

The experimental design could hardly have been simpler. For the waveguide, the researchers used a 2-meter-long acrylic tube that contained a 5-millimeter-deep pool of a glycerin-water solution. The particles were made from straws floating on top of a flat piece of plastic, and the sound source came from off-the-shelf computer speakers that researchers directed into the tube via a plastic funnel. Measuring the sound waves proved to be the most technical part of the experiment.

“This is something you could do yourself in your garage” said Ropp. “It was a dirt-cheap experiment with parts that are available at your corner hardware store. At one point, we needed bigger straws, so I went out and bought some bubble tea. The setup was extremely simple, but it showed the physics beautifully.”

The experiment focused on acoustic waves because soundproofing was easier to achieve, but the principles underlying the behavior they observed would be applicable to any wave system, the researchers said.
This fundamental research could form the basis for developing intelligent networks that perform simple non-algorithmic computation, with a future toward systems that perform sentient-like decision making, the researchers explained.

“I can think of parallels to artificial brains, with sections that respond to different frequency ‘brain waves’ that are malleable and reconfigurable” said Ropp.
This work was supported by the U.S. Office of Naval Research and Department of Energy’s Office of Science.

Lawrence Berkeley National Laboratory addresses the world’s most urgent scientific challenges by advancing sustainable energy, protecting human health, creating new materials, and revealing the origin and fate of the universe. Founded in 1931, Berkeley Lab’s scientific expertise has been recognized with 13 Nobel Prizes. The University of California manages Berkeley Lab for the U.S. Department of Energy’s Office of Science.

DOE’s Office of Science is the single largest supporter of basic research in the physical sciences in the United States, and claims to be working to address some of the most pressing challenges of our time.

However exciting these discoveries seem to be, one has to ask: are all these going to be used for our liberation, or for our further enslavement?