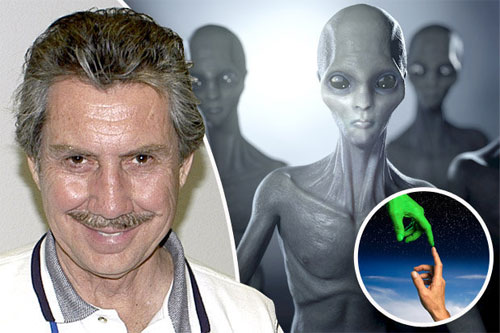 In an interview on 60 Minutes, entrepreneur and aerospace mogul Robert Bigelow said he was “absolutely convinced” that extraterrestrials visit Earth.

The segment was centered on Bigelow’s aerospace firm and its partnership with NASA to develop an expandable spacecraft, or what the mogul terms an “inflatable system,” but the interview with correspondent Lara Logan took a strange turn once aliens were brought up.

“Logan:
Do you believe in aliens?

Bigelow: I’m absolutely convinced. That’s all there is to it.

L:
Do you also believe that UFOs have come to Earth?

L:
Is it risky for you to say in public that you believe in UFOs and aliens?

L:
You don’t worry that some people will say, ‘Did you hear that guy, he sounds like he’s crazy’?

Bigelow has said he plans to spend up to $500 million to develop the first commercial space station, and his company has launched two experimental space modules, the Genesis I and the Genesis II.

He has plans for full-scale “manned space habitats,” which he hopes to use as orbital hotels, factories and research labs. He joins other entrepreneurs, such as Amazon.com’s Jeff Bezos and billionaire inventor Elon Musk, in a race to privatize space.

While he wouldn’t expand on what results he attained with that well-funded UFO research, Bigelow said humans would not have to venture far into space to encounter aliens.

“You don’t have to go anywhere,” he said. “It’s just like right under people’s noses.”

While the CEO didn’t elaborate for 60 Minutes he did talk more about UFOs and extraterrestrials in an interview on the AM radio show, Coast to Coast.