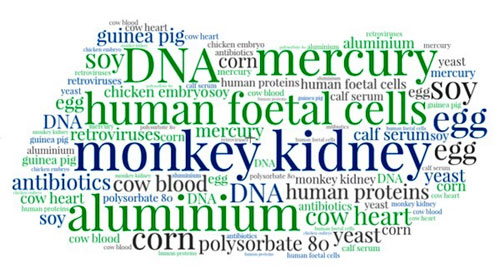 A list of vaccine excipients released by the CDC provides insight into some of the most toxic ingredients that big pharmaceutical companies use in manufacturing vaccines. With the FDA and CDC insisting on the safety of these vaccines, larger drug firms continue to use these ingredients to cash in on their products while simultaneously disregarding public safety.

The CDC’s list includes an array of excipients that use various vero cells taken from animal hosts. These cells have undergone great scrutiny as various clinical studies raised concerns about possible infection. An excipient found in polio vaccine, for example, contains cells from African green monkeys. Vero cells taken from this species of ape are known to be infected with Simian Virus 40, a DNA tumor virus associated with the onset of different types of cancer. Further analysis also revealed that the virus has a slow-moving an archetypal strain that drug manufacturers and regulators failed to monitor. The use of this infected vaccine excipient resulted in a significant increase in cancer rates since the 1960s.

A rotavirus vaccine also came under fire for using this excipient. A 2010 study published in the Journal of Virology found that the rotavirus vaccine contains a live simian virus, with researchers noting a 96 percent matching certainty. Another study confirmed the presence of an endogenous baboon virus in the same vaccine. The results appear in the journal Advances in Virology. Infected cells taken from diseased monkeys have also been feared to have tainted a smallpox vaccine. Warning indications for said vaccine include a host of adverse health conditions such as cardiac disease, blindness and encephalitis.

Bovine serum is another potentially lethal excipient found mostly in MMR and rotavirus vaccines. The inclusion of this excipient in vaccines has raised concerns of Creutzfeldt-Jakob disease (CJD) contamination. While different health agencies – including the World Health Organization, the CDC and the Australian Therapeutic Goods Administration— have refuted this, there were rare, documented cases of CJD infection in humans in the U.K. These cases were associated with ingestion of products infected with mad cow disease.

Experts have also raised concerns about the use of porcine vero cells in vaccine production. A rotavirus vaccine was in a bit of hot water a few years back after regulators found out that the treatment contained very high levels of porcine circovirus 1. The vaccine was proven to contain more than 100,000 porcine circovirus 1 DNA molecules in each dose. However, it remains uncertain how the virus directly affects humans, which makes it all the more disconcerting.

Highly toxic chemicals are not uncommon in vaccine production. In fact, the CDC’s list of vaccine excipients includes at least one industrial-grade chemical. Benzene, for example, is a key component of food dyes used in vaccines. Benzene is a highly toxic carcinogen associated with the onset of different types of cancer such as acute myeloid leukemia, non-Hodgkin’s lymphoma and multiple myeloma. Other carcinogenic compounds found in vaccines include formaldehyde, acetone and ethanol.

Thimerosal, a neurotoxin, was also present in most vaccine excipients listed in the CDC document. Thimerosal contains mercury, the second most toxic element in the world next to plutonium. Various studies have found a correlation between thimerosal and the onset of autism spectrum disorder in children.

Despite the apparent health hazard, big pharmaceutical companies insist on using aluminum hydroxide as a key component to vaccine production. Aluminum hydroxide is tied to a host of adverse medical conditions including rhabdomyolysis, encephalopathy and osteomalacia. The asthma-inducing glutaraldehyde also appeared to be a staple in vaccine production. Data from the CDC list showed that at least eight vaccine excipients used the toxic compound as a disinfectant. Glutaraldehyde was linked to chemical colitis, rectocolitis and eczema.

I Stopped Drinking This 10 Years Ago, And It Transformed My Health. Here’s Why