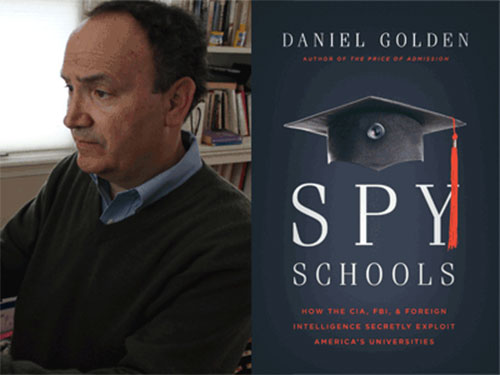 “Kenneth Moskow is one of a long line of CIA officers who have enrolled undercover at the Kennedy School, generally with Harvard’s knowledge and approval, gaining access to up-and-comers worldwide. For four decades the CIA and Harvard have concealed this practice, which raises larger questions about academic boundaries, the integrity of class discussions and student interactions, and whether an American university has a responsibility to accommodate U.S. intelligence.” – Daniel Golden, investigative journalist.

A new book documents how US foreign and domestic intelligence agencies use, and perhaps exploit, higher education and academe for spy operations. In Spy Schools: How the CIA, FBI and Foreign Intelligence Secretly Exploit America’s Universities, investigative journalist Daniel Golden explores the fraught, and sometimes exploitative relationship between higher education and intelligence services, both foreign and domestic.

Chapters explore various case studies of the Central Intelligence Agency and Federal Bureau of Investigation using the open and collaborative nature of higher education to their advantage, as well as foreign governments infiltrating the U.S. via education.
Perhaps the most prestigious institution Golden examines is Harvard University, probing its cozy relationship with the CIA. (While Harvard has recently come under scrutiny for its relationship with the agency after it withdrew an invitation for Chelsea Manning to be a visiting fellow – after the agency objected to her appointment – this book was written before the Manning incident.)

The university, which has had varying degrees of closeness and coldness with the CIA over the years, currently allows the agency to send officers to the midcareer program at the Kennedy School of Government while continuing to act undercover, with the school’s knowledge.
When the officers apply, often with fudged credentials that are part of their CIA cover, the university doesn’t know they’re CIA agents, but once they’re in, Golden writes, Harvard allows them to tell the university that they’re undercover.

Their fellow students, however, often high-profile or soon-to-be-high-profile actors in the world of international diplomacy are kept in the dark.
Harvard officials didn’t deny Golden’s telling, but defended the university’s practices while emphasizing the agreement between the university and the CIA – which Golden also writes about – on not using Harvard to conduct CIA fieldwork.
“Harvard Kennedy School does not knowingly provide false information or ‘cover’ for any member of our community from an intelligence agency, nor do we allow members of our community to carry out intelligence operations at Harvard Kennedy School”, Eric Rosenbach, co-director of the Kennedy School’s Belfer Center for Science and International Affairs said in a statement.

While Golden said the CIA’s involvement on campus raises existential questions about the purpose and integrity of higher education, Harvard maintained that the Kennedy School was living up to its mission.
“Our community consists of people from different spheres of public service. We are proud to train people from the U.S. government and the intelligence community, as well as peace activists and those who favor more open government”, Rosenbach said in his statement. “We train students from a wide range of foreign countries and foreign governments, including – among others – Israel, U.K., Russia and China. That is consistent with our mission and we are proud to have that reach.”

Another highlight of the book is the chapter documenting the CIA’s efforts to stage phony international academic conferences, put on to lure Iranian nuclear scientists as attendees and get them out of their country, and in a position to defect to the US.
According to Golden’s sources, the operations, combined with other efforts, have been successful enough “to hinder Iran’s nuclear weapons program”.

What’s Really Going On, Plus Do We Know?