Study documents the remarkable antitumor activity of the wild carrot 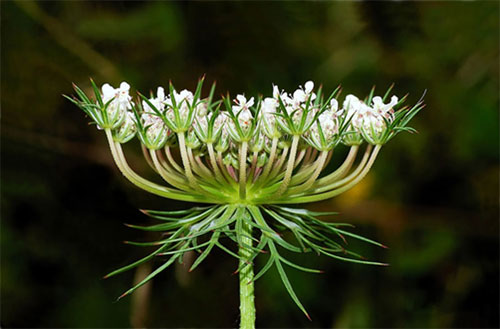 The oil extracts of the wild carrot (Daucus carota) could potentially be used to treat for skin cancer, according to a study published in the journal BMC Complementary and Alternative Medicine. In particular, the study looked into the wild carrot’s ability to suppress the proliferation of tumors and protect from chemically induced papillomas.

The researchers used HaCaT (non-tumorigenic), HaCaT-ras A5 (benign tumorigenic) and HaCaT-ras II4 (malignant) keratinocytes for their study. The three cell lines were treated with increasing concentrations of DCOE fractions (10, 25, 50 and 100 μg/mL). A WST-1 assay was used to gauge cell proliferation. They used flow cytometry to determine cell cycle distribution and western blot to determine the action of apoptosis-related proteins.

An animal model was created involving mice that had chemically-induced papillomas through the application 190 nmol of 7,12-Dimethylbenz (a) anthracene (DMBA) in 0.2 mL acetone on their dorsal region. After three weeks, 8 nmol TPA in 0.2 mL acetone was applied twice weekly at the same spot. Three mice groups received varying doses of F2 fraction in 10 milligrams per kilogram (mg/kg), 50 mg/kg, 200 mg/kg doses.

The scientists identified F2 as being highly effective, not only reducing the number of cancer cells but also causing the enhanced expression of pro-apoptotic proteins and inhibiting anti-apoptotic proteins.
Intraperitoneal injection of F2 fraction also inhibited papilloma incidence, yield, and volume.

The scientists concluded that F2 fraction of DCOE has potent anti-tumor qualities.