Study Shows Evidence Supporting the Idea of a Holographic Universe 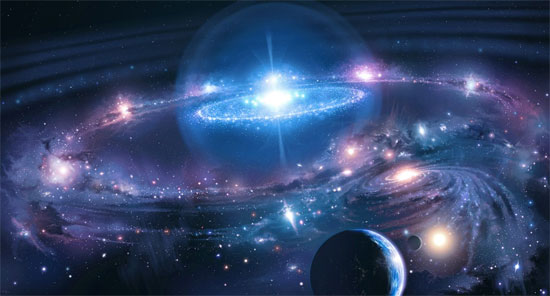 A new study published in Physical Review Letters has shown evidence supporting the idea of a holographic universe that stands up almost as well as the standard cosmological model currently accepted by astronomers.

The idea that the universe is a hologram doesn’t imply that you, your cat, and everything you experience is not real or physical. The holographic principle implies that all the properties of our three-dimensional (plus time) universe are encoded on a two-dimensional surface.

“Imagine that everything you see, feel and hear in three dimensions (and your perception of time) in fact emanates from a flat two-dimensional field,” senior author Professor Kostas Skenderis from the University of Southampton said in a statement. “The idea is similar to that of ordinary holograms where a three-dimensional image is encoded in a two-dimensional surface, such as in the hologram on a credit card. However, this time, the entire universe is encoded.”

The researchers tested a series of holographic models against observations of the very early universe made by the European Space Agency’s Planck space observatory. The team was able to exclude some of the models, but others were seen to satisfy the observations.

This is an interesting finding as it gives a better direction for scientists to investigate the plausibility of the holographic universe. The models they tested, though, performed slightly worse than the standard model, which assumes the universe is made of dark energy and dark matter and a small fraction of visible matter.

“Einstein’s theory of general relativity explains almost everything large scale in the universe very well, but starts to unravel when examining its origins and mechanisms at a quantum level,” continued Skenderis. Scientists have been working for decades to combine Einstein’s theory of gravity and quantum theory. Some believe the concept of a holographic universe has the potential to reconcile the two.

The holographic principle was developed in the study of black holes and it has been used a lot in string theory. It may or may not bring forth the theory of everything, but it is interesting to see that versions of it can explain the universe we currently see.