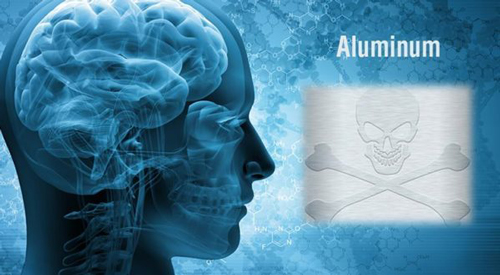 Above is a great quote from Dr. Christopher Shaw, a neuroscientist and professor at the University of British Columbia, illustrating how aluminum has infiltrated every aspect of our lives. It’s in our deodorant, it’s in our vaccines, it’s in our homes, and it’s in our food, and as he explains, while the body does a great job of eliminating it from our system, it does have a threshold.

He also explains how the aluminum in vaccines is different from that which occurs naturally. Adjuvants like aluminum (one of the most common) are a component of vaccines that potentates the immune response to an antigen. The adjuvant is basically used to invoke the desired immune response. This is why the body does not rid itself of the aluminum in this form, because that’s the whole point of adjuvants — they are meant to stick around and allow that antigen to be presented over and over again. It can’t be excreted because it must provide that prolonged exposure of the antigen to your immune system. This is why they put it into vaccines in the first place.

But there is no debating the toxicity of aluminum. This has been confirmed in scientific literature for a very long time.

Glyphosate, the main active ingredient found within Monsanto’s Roundup herbicide, is (unfortunately) another ingredient that can be found almost everywhere. For example, a study from the U.S. Geological Survey, titled Pesticides in Mississippi Air and Rain: A Comparison Between 1995 and 2007, reveals that Roundup herbicide (aka glyphosate) and its toxic degradation byproduct AMPA were found in over 75% of the air and rain samples tested from Mississippi in 2007. Researchers weren’t surprised, given the fact that 2 million kilograms of glyphosate were applied statewide in 2007.

“So, what is the toxicological significance of the discovery of glyphosate in most air samples tested? In the month of August, 2007, if you were breathing in the sampled air you would be inhaling approximately 2.5 nanograms of glyphosate per cubic meter of air. It has been estimated the average adult inhales approximately 388 cubic feet or 11 cubic meters of air per day, which would equal to 27.5 nanograms (billionths of a gram) of glyphosate a day.”

It’s been discovered in California wines, even “organic” ones, in our food, and in animal feed, a topic that remains a big time debate between citizens and Monsanto.
Almost all levels of science that are used to approve the products that surround us, from food to cosmetics and more, have been taken over by corporations, and many prominent scientists have been fighting against this blatant corruption for years.

This is why John Ioannidis, an epidemiologist at Stanford University School of Medicine, published the most widely accessed article in the history of the Public Library of Science (PLoS), titled Why Most Published Research Findings Are False.

This was more than 10 years ago. Dr. Richard Horton, the current editor-in-chief of The Lancet, has discussed the same issue, revealing that half of all the published literature could be false.

“It is commonly believed that Roundup is among the safest pesticides. This idea is spread by manufacturers, mostly in the reviews they promote, which are often cited in toxicological evaluations of glyphosate-based herbicides. However, Roundup was found in this experiment to be 125 times more toxic than glyphosate. Moreover, despite its reputation, Roundup was by far the most toxic among the herbicides and insecticides tested. This inconsistency between scientific fact and industrial claim may be attributed to huge economic interests, which have been found to falsify health risk assessments and delay health policy decisions.” — R. Mesnage et al., Biomed Research International, Volume 2014 (2014) article ID 179691. 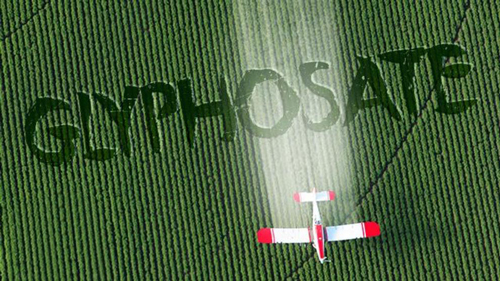 A German study that concluded in June 2013 has discovered a significant amount of glyphosate in the urine of people and animals from all across Europe. Their analysis found that every urine sample contained concentrations of glyphosate at 5 to 20 times more than the limit for drinking water. Apart from being used increasingly in food production, glyphosate-based weed killers are often sprayed onto railway lines, urban pavements, and roadsides.

The study examined urine from city workers, journalists, and lawyers who had no direct contact with glyphosate, so it’s interesting to see that it turned up in their urine samples — particularly since they were urban residents, not rural. Another study collected urine samples from 18 different countries from all over Europe and showed similar results.

And recently, amidst mounting evidence proving this to be true, the World Health Organization (WHO) finally admitted that this substance causes cancer.

Glyphosate, Aluminum, and the Pineal Gland

“What’s appalling is that we have known about these dangers for decades yet have done little about it. Nearly 20 years ago, scientists at the National Research Council called for swift action to protect young and growing bodies from pesticides. Yet today, U.S. children continue to be exposed to pesticides that are known to be harmful in places they live, learn and play.” – Pesticide Action Network North America (PANNA).

At the Third International Symposium on Vaccines in March 2014 and as part of the 9th International Congress on Autoimmunity, MIT scientist Dr. Stephanie Seneff gave a presentation titled A Role for the Pineal Gland in Neurological Damage Following Aluminum-Adjuvanted Vaccination.

In her heavily cited paper, she explains how many common neurological disorders, like Autism and Parkinson’s, for example, have a common origin. These are: an insufficient supply of sulfate to the brain and enhanced toxic metal exposure (e.g., aluminum, mercury) due to our impaired ability to detoxify and eliminate them. She also shows that such metals interfere with sulfate synthesis, causing cellular debris to accumulate.

It goes on to explain that Heparan sulfate in the lysosomes is critical for recycling cellular debris, garbage, and damage that could lead to disease. Multiple studies have shown that a deficiency in Heparan sulfate levels leads to autism. In summary, the paper points to the idea that autism and Alzheimer’s disease, rates of which continue to rise, are caused by a severe deficiency in sulfate supplies to the brain, and that the Pineal Gland, which Rene Descartes called “the seat of the soul” can synthesize sulfate stimulated by sunlight, and deliver it via melatonin sulfate. Aluminum, mercury, and glyphosate, working together, can derail this process. They work synergistically.

The pineal gland, as well as the biological aspects of it, are not yet fully understood, so it is troublesome that we know all of this can have an effect on us not only physically, but spiritually as well.

“One of the consequences of insufficient sulfate in the brain is that it impairs the brain’s ability to eliminate heavy metals and other toxins. To make matters worse, those same toxic metals also interfere with sulfate synthesis. The net result can be an accumulation of cellular debris.” – Claire I. Viadro, MPH, PhD.

Some interesting studies have been done when it comes to Heparin sulfate, which also plays a key role in fetal brain development, protecting against damaging free radicals. When it comes to the link between autism and sulfate deficiency, human and animal studies have both presented intriguing evidence.

In conclusion, the researchers state: “In this paper, we have developed the argument that glyphosate, the active ingredient in the herbicide Roundup, and aluminum, a pervasive toxic metal in our environment, operate synergistically to induce dysfunction in the pineal gland leading to the sleep disorder that is characteristic of multiple neurological diseases, including autism, ADHD, depression, Alzheimer’s disease, ALS, anxiety disorder and Parkinson’s disease. We further argue that impaired supply of melatonin and sulfate to the brain as a consequence of pineal damage can explain how the disrupted sleep can lead to more general neurological damage, and we propose that this is a significant component of the disease process. The steady increase in glyphosate usage on corn and soy crops aligns remarkably well with the increase in sleep disorder and in autism, as well as other neurological diseases. We have shown how disruption of CYP enzymes and promotion of anemia and hypoxia, due to both aluminum and glyphosate, and disruption of gut bacteria by glyphosate, can cause a pathology leading to deficiencies in both melatonin and sulfate in the cerebrospinal fluid that is characteristic of autism and Alzheimer’s disease. Insufficient sulfate leads to impaired lysosomal recycling of cellular debris, and insufficient melatonin leads to sleep disorder, vascular disease and impaired protection from ROS damage in the brain.”

Another People Let Down by Its Elite. Norwegian Utøya Six Years Later: Irrefutable Indications of a False Flag…

C60: Currently the Best Known Life Extender on the Planet