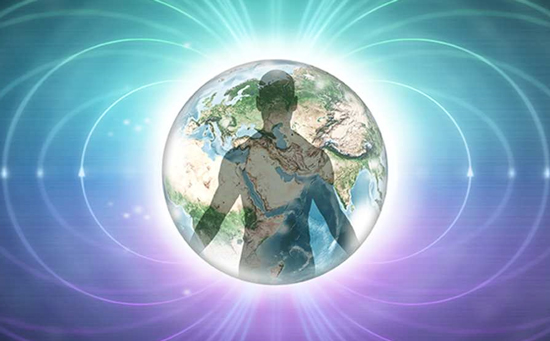 Over the past few years, a number of publications have emerged from scientists and researchers all over the world regarding the human magnetic field. Not only have they been studying the human magnetic field, they’ve also been studying the magnetic field of the planet, and how all these fields, including our own, can impact ourselves and the people around us. It’s similar to quantum entanglement, in that both show that everybody and every living being is connected in ways we have yet to fully understand.

Leading the charge are the brilliant scientists over at the HearthMath Institute. An internationally recognized nonprofit research and education organization, it dedicates itself to helping people reduce stress, self-regulate emotions, and build energy and resilience for healthy, happy lives.

A large portion of their research has investigated heart and brain interaction. Researchers have examined how the heart and brain communicate with each other and how that affects our consciousness and the way in which we perceive our world. For example, when a person is feeling really positive emotions like gratitude, love, or appreciation, the heart beats out a certain message. Because the heart beats out the largest electromagnetic field produced in the body, it can yield significant data for researchers.

Recently, the Institute has published new research which suggests that daily autonomic nervous system activity not only responds to changes in solar and geomagnetic activity, but also synchronizes with the time-varying magnetic fields associated with geomagnetic field-line resonances and Schumann resonances.

In 1952, German physicist and professor W.O. Schumann of the Technical University of Munich began attempting to answer whether or not the Earth itself has a frequency – a pulse. His assumption about the existence of this frequency came from his understanding that when a sphere exists inside of another sphere, an electrical tension is created. Since the negatively charged Earth exists inside the positively charged ionosphere, there must be tension between the two, giving the Earth a specific frequency. Following his assumptions, through a series of calculations he was able to land upon a frequency he believed was the pulse of the Earth. This frequency was 10hz. 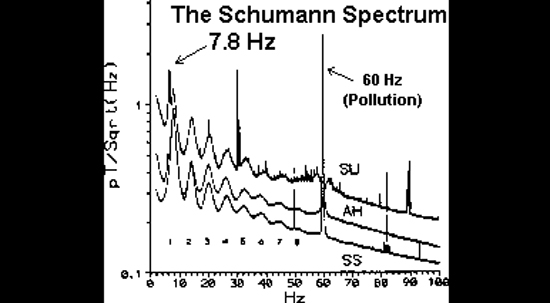 It wasn’t until 1954 that Schumann teamed up with another scientist, Herbert König, and confirmed that the resonance of the Earth maintained a frequency of 7.83 Hz. This discovery was later tested out by several scientists and confirmed. Since then, the Schumann Resonance has been the accepted term to describe or measure the pulse, or heartbeat of the Earth.

HearthMath Institute wrote: “To follow up and confirm these profound findings, an international study was conducted. The preliminary findings have confirmed and extended the results of the first study and they indicate humanity’s heart rhythms are synchronized on a global scale. We are synchronized not only with each other, but also with the Earth’s energetic systems.” The study was published in the International Journal of Environmental Research and Public Health, and its results are consistent with other studies showing that changes in solar and geomagnetic activity correlate with changes in the human nervous system activity.

It’s long been known that all biological systems on Earth are exposed to invisible magnetic fields of all kinds, and at all range of frequencies, and that these fields can affect every cell and circuit to a greater or lesser degree. A number of physiological rhythms, as the study points out, have been shown to be synchronized with solar and geomagnetic activity.

As the study points out: “Human regulatory systems are designed to adapt to daily and seasonal climatic and geomagnetic variations; however, sharp changes in solar and geomagnetic activity and geomagnetic storms can stress these regulatory systems, resulting in alterations in melatonin/serotonin balance, blood pressure, immune system, reproductive, cardiac, and neurological processes. Disturbed geomagnetic activity is associated with the intensification of existing diseases, significant increases in myocardial infarction incidence and death, changes in blood flow, aggregation, and coagulation, increased blood pressure, cardiac arrhythmias, and seizures in epileptics.”
Fascinating, isn’t it? It makes one wonder just how much we know about our health and what influences it.

The study outlines how, during periods of increased solar activity, which peaks every 10.5 to 11 years, “the sun emits increased ultraviolet (UV) energy and solar radio flub, which is measured by the 2.8 GHz signal” and “although the details of the physiological mechanisms in humans and animals are not yet fully understood, it is apparent that solar and magnetic influences affect a wide range of human health and behavioral processes, with the cardiovascular and nervous systems being the most clearly affected”.

The study goes on to outline several examples where the human autonomic nervous system seems to be responding to this type of activity.
For this specific study, ten healthy individuals from the ages of 34 to 65 years old participated, with an average age of 53. Their Heart Rate Variability (HRV) was recorded for 31 consecutive days. To see the methods and results, as well as the statistical analysis, limitations, and more, please refer to the actual study.

Findings like these, and many more, are exactly why the HeartMath Institute began what’s known as the Global Coherence Initiative (GCI).

Others are also working on identifying how these fields can be sensed. A recent study published by Kirschvink in the journal Nature Communications suggests that a protein in the human retina, when placed into fruit flies, has the ability to detect magnetic fields. The research claims that it can serve as a magneto sensor, but it’s unknown whether or not humans use it in this way as well. 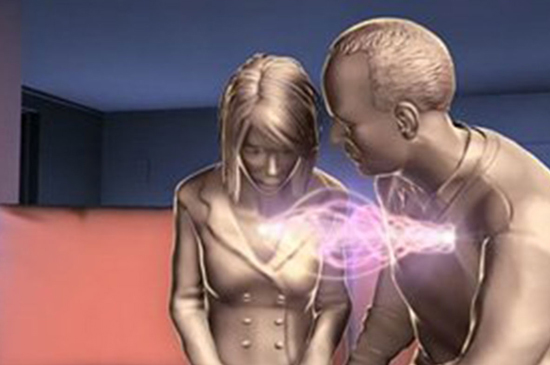 The GCI in an international cooperative effort to help activate the heart of humanity and facilitate a shift in global consciousness. Its primary focus is to invite people to participate by actively adding more heart-coherent love, care, and compassion into the planetary field. It also aims to scientifically research how we are all energetically connected with each other and the planet, and how we can utilize this interconnectivity to raise our personal vibration to assist in creating a better world.

The hypotheses of the researchers and scientists behind this process are as follows:
– The Earth’s magnetic fields are a carrier of biologically relevant information that connects all living systems;
– Every person affects this global information field. Large numbers of people creating heart-coherent states of love, appreciation, care, and compassion can generate a more coherent field environment that benefits others and helps off-set the current planetary discord and incoherence;
– There is a feedback loop between human beings and Earth’s energetic/magnetic systems;
– Earth has several sources of magnetic fields that affect us all. Two of them are the geomagnetic field that emanates from the core of the Earth, and the fields that exist between Earth and the ionosphere. These fields surround the entire planet and act as protective shields blocking out the harmful effects of solar radiation, cosmic rays, sand, and other forms of space weather. Without these fields, ice as we know it could not exist on Earth. They are part of the dynamic ecosystem of our planet;
– The Earth and ionosphere generate frequencies that range from 0.01 hertz to 300 hertz, some of which are in the exact same frequency range as the one happening in our brain, cardiovascular system, and autonomic nervous system. This fact is one way to explain how fluctuations in the Earth’s and Sun’s magnetic fields can influence us. Changes in these fields have also been shown to affect our brain waves, heart rhythms, memory, athletics performance, and overall health. Changes in the Earth’s fields from extreme solar activity have been linked to some of humanity’s greatest creations of art, as well as some of its most tragic events.

We know how these fields affect us, but what about how we affect these fields? That’s the real question here. GCI scientists believe that because brainwave and heart rhythm frequencies overlap the Earth’s field resonance, we are not just receivers of biologically relevant information, but also feed information into the global field, thus creating a feedback loop with the Earth’s magnetic fields: “Research is indicating that human emotions and consciousness encode information into the geomagnetic field and this encoded information is distributed globally. The Earth’s magnetic fields act as carrier waves for this information which influences all living systems and the collective consciousness.”

This research, which is still in its infancy, has great ramifications. It will further push along the fact that our attitudes, emotions, and intentions actually matter, a lot, and that these factors within the realm of non-material science can affect all life on Earth. Coherent, cooperative intention could impact global events and improve the quality of life on Earth. Practicing love, gratitude, and appreciation, and bettering ourselves as individuals, are just a few of many action steps we can take toward changing our planet for the better.

This research further reinforces the fact that we have a special kind of relationship with every living system around us, an energetic relationship where processes as described above affect our nervous system, health, emotions, and mood. Previous research on this topic shows just how important our emotions could be with regards to coding information into this field. Positive emotions can uplift our nervous system, while negative emotions can dampen it.

What to do with it 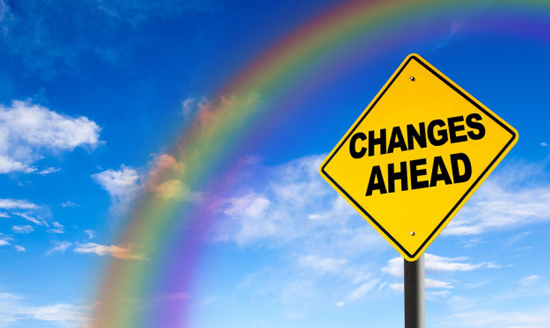 The best way, for now, to work with this information and incorporate it into our daily lives is through self-observation.
So, the next time you feel upset, angry, or frustrated, try observing yourself and how you react. It’s a great practice to identify and neutralize your “buttons” so they cannot be pushed, and work on your personal development. You have to do whatever you can to feel good, which could include exercise, eating healthy, minimizing electronics usage, spending time with friends and animals, and more. You could practice being less judgmental, and work on your intentions by figuring out if they are good and beneficial. You could be more grateful, you could help others in need, and you could treat others with more kindness and compassion.

There are a number of tools you could use, like meditation, for example, to assist you with these action steps. The bottom line is, if you are at peace with yourself, and have control over your emotions, you are helping the planet and others around you as well. If you are constantly angry, harming others (even if not physically, but with your emotions and words), or have negative intentions, you could be doing the exact opposite.

To further your research on this topic, an excellent place to start is the at the HeartMath Institute.

Has Drug-Driven Medicine Become A Form of Human Sacrifice?