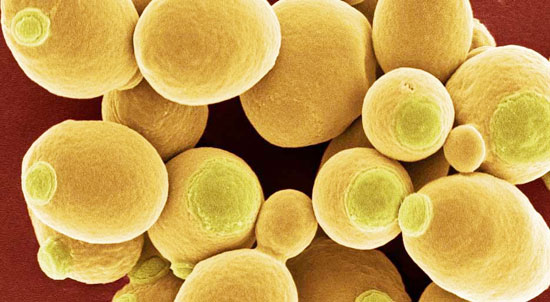 It’s well-recognized that the incidence of autoimmune diseases has been rising at an enormous rate. A study indicates that a significant factor in causing them may be the common bakers or brewers yeast, Sacccharomyces cerevisiae used in many vaccinations, including HepB, which is given to nearly all newborn babies in the United States before they’re a day old.

The specific part of S. cerevisiae that’s of concern is mannan, which is found in the cell walls of yeasts and also in mammalian glycoproteins. These glycoproteins are found in cell walls, connective tissues like collagen, gastrointestinal mucous secretions, and blood plasma. They perform many functions. Obviously, if the immune system goes on the attack against mannan, it can be devastating. Yet, that appears to be happening in many autoimmune diseases.

Both the Centers for Disease Control (CDC) and the National Institutes of Health (NIH) are aware of the increase in autoimmune diseases. Autoimmune disease research is now included in chapter three of the NIH Biennial Report which discusses their approach to dealing with the issue, including the type of research they’re supporting. Nowhere is there any indication that vaccinations are being considered as a potential cause.

Of course, if you don’t look for it, you are not likely to find it. Clearly, they are not promoting a genuine investigation into finding the causes of autoimmune disorders, as they’re willing to consider anything and everything except the elephant in the room named vaccination.

As is the case with autism, the primary focus is on genetics, with environment also considered – as long as the term environment doesn’t include vaccines. As with autism, that focus completely ignores the outright absurdity of blaming genetics for new non-infectious disease phenomena.


How Can Yeast Cause Such Terrible Diseases?

Yeast is, of course, used to make bread rise and create the alcohol in beer. So how can it suddenly turn into an enemy? The answer is in how it enters the body, and what enters with it. The purpose of a vaccine is to create a localized storm in the immune system so that it will respond to a co-injected substance, which may be a weakened microbe or a small bit of a microbe, by creating antibodies to it.

An irritant, called an adjuvant, is what causes the immune system storm, and the microbe is called an antigen. The catch is that other substances injected with the antigen and adjuvant may also be seen as antigens. If one of those substances is similar to something that naturally exists in the body, then the immune system may create antibodies to part of its own body, creating an autoimmune disease.

The researchers who focused on autoimmune aspects of S. cerevisiae (yeast) found significant correlations between yeast’s mannan and known autoimmune antigens in several autoimmune diseases. They found close and, in some instances, exact matches of the genetic sequences. For example, in the case of rheumatoid arthritis, the percent found to match were:

Not only were there significant sequence matches with four known rheumatoid arthritis auto-antigens, there was a perfect match with one. In other conditions, they found:

Although you may not generally think of heart disease as an autoimmune disorder, certain forms of it, such as rheumatic heart disease, are known to be – and as this study seems to indicate, others may be, too. 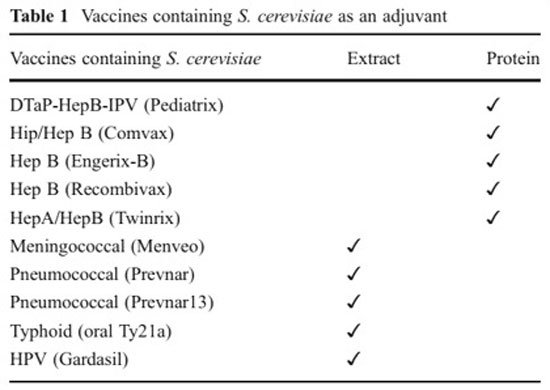 It should be noted that anti-phospholipid syndrome was originally associated with the tetanus vaccine. Referring to the table on the right of vaccines containing S. cerevisiae, you can see that the first vaccine listed is DTaP. The T stands for tetanus.

Do we know for certain that vaccinations containing S. Cerevisiae cause these autoimmune diseases? No, we don’t. However, we now have information that strongly links yeast-containing vaccines to autoimmune disorders – and we have absolutely nothing to suggest that they don’t cause them.

In fact, not only do we now have the strong association between S. cerevisiae auto-antibodies and mannan-containing proteins, we also have a history of increasing rates of autoimmune disorders that, at a casual look, can be seen to correlate with the expanding vaccination schedules in countries around the world.

Autoimmune disorders are devastating our health and a huge percentage of us suffer from a severely diminished quality of life. These disorders aren’t happening because of genetic defects, and to suggest that they are is an insult to our intelligence – though that seems to be the goal of our health agencies.

We now have information that strongly links yeast-containing vaccines to autoimmune disorders. The cost to us as individuals and as a society is enormous. Surely it’s past time to take a serious and honest look at vaccine risks, including the use of yeast as an ingredient.

Instead, we have a mad rush to create ever-more yeast-related vaccines, because modern recombinant DNA technologies have made it so much easier, faster, and cheaper to produce them. Unfortunately, though, to step back and apply the precautionary principle isn’t profitable. So, you can expect to see more and more of them, no matter how much harm they produce.

The Monetary System Is Collapsing: The Most Insidious Form of Theft (2)