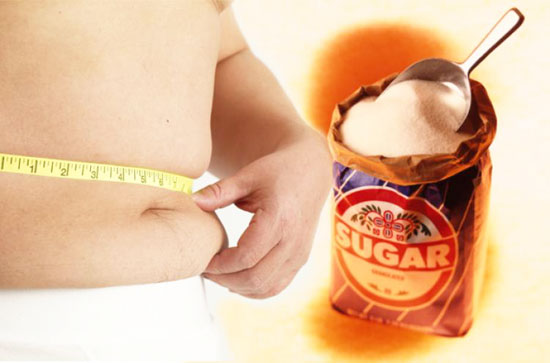 Big Sugar first began its campaign against reality in 1956, shortly after President Eisenhower was photographed putting artificial sweeteners in his coffee. The President said his doctor advised he stop putting sugar in his coffee if he wanted to stay thin.

In response, the sugar industry created advertisements that maintained no singular food is fattening, and so the motto was born: a calorie is a calorie. The ads declared that there was no difference between calories from fruit or sugar. There is a degree of truth to that: if you were to eat a surplus of calories daily for a sustained period of time, you would gain weight – even if all you were eating were fruits or vegetables. Calories are, at their core, a unit of energy.
However, what those calories are comprised of can have very different effects on your body.

What actually happens when you eat sugar

So when you eat sucrose, also known as table sugar, your digestive tract breaks it down into fructose and glucose. It is then transported directly to the liver via the portal vein. Fructose (and high fructose corn syrup) are especially problematic for the body: your liver will keep absorbing the fructose, even when its energy stores are full. This leads to fat deposits in the liver, and more fat circulating in your bloodstream – which raises triglycerides and cholesterol, and in turn, raises the risk for conditions like heart disease and type-2 diabetes.

Liver fat may also decrease insulin’s ability to do its job, which increases the risk of diabetes. And when insulin isn’t working well, the amount of fat the liver sends out into the blood also increases. It creates a rather vicious cycle where the more sugar you eat, the sicker you become – and the less capable your body is of recovering from it.

Countless studies have pointed to sugar intake as a means of developing insulin resistance. For example, a 2007 study that was published in The Journal Of Biological Chemistry found that sucrose-sweetened water induced insulin resistance, exacerbated memory deficits and increased amyloid plaque formation in mice with Alzheimer’s disease. The team noted that their research indicated that dietary sugar plays a plausible role in the development of Alzheimer’s.

Another study found that feeding sucrose to normal, healthy rats caused a significant loss of insulin sensitivity. And you can bet there are more; decades of research have shown that sugar can, and is, harmful. As The New York Times reports, “By the 1960s, researchers in these fields had clearly demonstrated that different carbohydrates, like glucose and fructose, are metabolized differently, leading to different hormonal and physiological responses, and that fat accumulation and metabolism were influenced profoundly by these hormones.”

In spite of the understood biological processes involved that clearly demonstrate at least one pathway for sugar to cause insulin resistance and other health issues – the industry, and even the American Diabetes Association (ADA) – are clutching their pearls of denial closer than ever. A 2014 article from the ADA even went so far as to declare that there is no evidence to suggest that “any dietary or added sugar has a unique or detrimental impact relative to any other source of calories on the development of obesity or diabetes”. This sentiment is echoed throughout the nutrition industry: a calorie is a calorie. And yet, actual biology dictates that this sentiment is a fallacy.

Research links sugar consumption to everything from to obesity, diabetes, heart disease, cancer, and even Alzheimer’s disease. This is not new, and the research has been going on for decades. But, there is always someone you can pay off.

In the 1970s, Fred Stare – founder of the Harvard School of Public Health – was paid off by the sugar industry to sing the praises of sugar and absolve the substance of its health crimes in a lengthy journal supplement.

In 2016, it was revealed that the last five decades of research on sugar have largely been influenced by – you guessed it – the sugar industry. Internal documents revealed that industry big-wigs were paying off scientists to play down the ill effects of sugar all the way back in 1967.

The food industry’s hold over nutrition science continues to persist to this day, preventing real research from being conducted and encouraging the consumption of a substance they know is harmful.