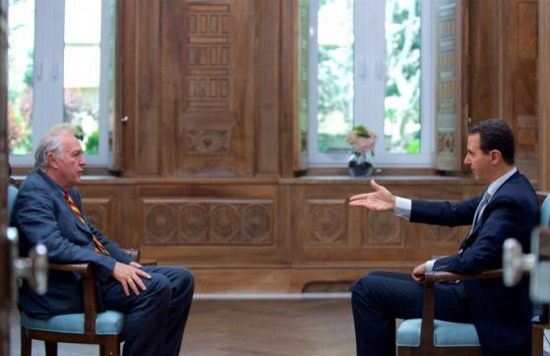 Syrian President Bashar al-Assad during an interview with AFP’s Beirut bureau chief Sammy Ketz in the capital Damascus, on April 12, 2017.

“Our impression is that the West, mainly the United States, is hand-in-glove with the terrorists. They fabricated the whole story in order to have a pretext for the attack.”

On April 6, 2017, Secretary of State Rex Tillerson claimed the U.S. Intelligence Community had assessed with a “high degree of confidence” that the Syrian government forces had unleashed a toxic chemical bomb against innocent civilians in Khan Sheikhoun in Syria’s Idlib Governate.

On April 13, 2017, CIA Director Mike Pompeo delivered his first public speech at the Center for Strategic and International Studies in Washington. Pompeo repeated the claim that the U.S. Intel Community (IC) had quickly assessed that the Syrian government forces were responsible.

However, a number of intelligence sources have made contradictory assessments, saying the preponderance of evidence suggests that Al Qaeda-affiliated rebels were at fault, either by orchestrating an intentional release of a chemical agent as a provocation or by possessing containers of poison gas that ruptured during a conventional bombing raid.

MIT Professor Theodore Postol disputes the U.S. IC version of the event and believes that the intentional release of a chemical agent was conducted on the ground at an optimally chosen day and time.

Many observers have suggested – as the Russians did – that containers of poison gas ruptured during a conventional bombing raid.

This explanation is now ruled out by President Bashar al-Assad himself. Indeed, the bombing raid occurred around 11:30 – 12:00, while the poison gas was released much earlier, possibly a few minutes before 7:00 am. 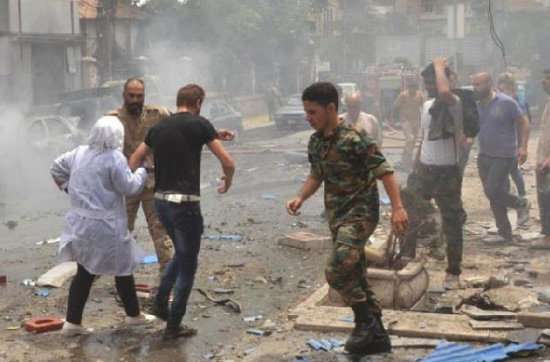 Sammy Ketz:Did you give an order to strike Khan Sheikhun with chemical weapons last Tuesday?

President Assad: Actually, no one has investigated what happened that day in Khan Sheikhun till the moment. As you know, Khan Sheikhun is under the control of Al-Nusra Front, which is a branch of Al-Qaeda, so the only information the world have had till this moment is published by Al-Qaeda branch. No one has any other information. We don’t know if the whole pictures or videos that we’ve been seeing are true or fabricated. That’s why we asked for investigation to what happened in Khan Sheikhun. This is first.

Second, Al-Qaeda sources said that the attack happened at 6, 6:30 in the morning, while the Syrian attack in the same area was around noon, between 11:30 to 12. So they’re talking about two different stories or events. So there was no order to make any attack, we don’t have any chemical weapons, we gave up our arsenal a few years ago. Even if we have them, we wouldn’t use them, and we have never used our chemical arsenal in our history.

Sammy Ketz: So what happened this day?

President Assad: As I said, the only source is Al-Qaeda, we cannot take it seriously. But our impression is that the West, mainly the United States, is hand-in-glove with the terrorists. They fabricated the whole story in order to have a pretext for the attack. It wasn’t an attack because of what happened in Khan Sheikhun. It’s one event. Its stage one is the play that we saw on the social networking and on TVs, and the propaganda, and the stage two is the military attack. That’s what we believe is happening because it’s only (a) few days – two days, 48 hours – between the play and the attacks, and no investigations, no concrete evidence about anything. The only things were allegations and propaganda, and then (the) strike.

President Assad: Definitely, a hundred percent for us, it’s fabrication. We don’t have an arsenal, we’re not going to use it. And you have many indications if you don’t have proof, because no one has concrete information or evidences, but you have indications. For example, less than two weeks, around ten days before that attack, the terrorists were advancing in many fronts, including the suburbs of Damascus and Hama, which is not far from Khan Sheikhun. Let’s suppose we have this arsenal, and let’s suppose that we have the will to use it, why didn’t we use it when we were retreating and the terrorists were advancing? Actually, the timing of that attack – or alleged attack – was when the Syrian army was advancing very fast, and actually the terrorists were collapsing. So why to use it, if you have it and if you have the will? Why to use it at that timing, not when you were in a difficult situation, logically? This is first.

Second, if you want to use it, if you have it and if you want to use it – again, this is if we suppose – why to use it against civilians, not to use it against the terrorists that we are fighting? Third, in that area, we don’t have army, we don’t have battles, we don’t have any, let’s say, object in Khan Sheikhun, and it’s not a strategic area. Why to attack it? What’s the reason? Militarily, I’m talking from a military point of view. Of course, the foundation for us, morally, we wouldn’t do it if we have it. We wouldn’t have the will, because morally this is not acceptable. We won’t have the support of the public. So every indication is against the whole story, so you can say that this play that they staged doesn’t hold together. The story is not convincing by any means. 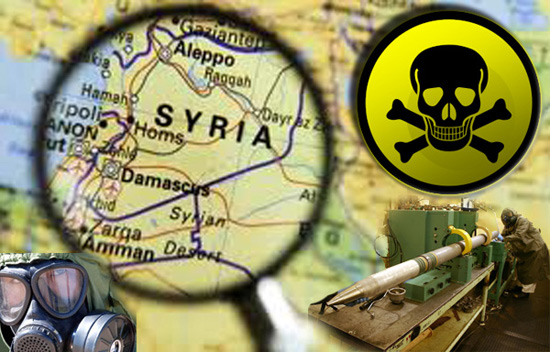 Sammy Ketz:You know, your government said in the beginning that you hit a chemical weapon depot. Is it true?

President Assad: It was a possibility, because when you attack any target related to the terrorists, you don’t know what’s in it. You know that this is a target – it could be a store, it could be (a) warehouse, it could be a depot, it could be a camp, it could be a headquarter, we don’t know. But you know that the terrorists are using this place and you attack it, like any other place, and that’s what we’ve been doing since the beginning of the war on (a) daily basis, on (an) hourly basis sometimes, but you cannot tell what’s within this. So, that was one of the possibilities – that the airstrikes attacked a depot of chemical materials. But this is conflicting again with the timing of the announcement, not because only the terrorists announced it in the morning, but because their media, their pages on Twitter and on the internet announced the attack a few hours before the alleged one, which is 04:00 in the morning. (At) 04:00 in the morning, they announced that there’s going to be a chemical attack, we have to be ready. How did they know about it?