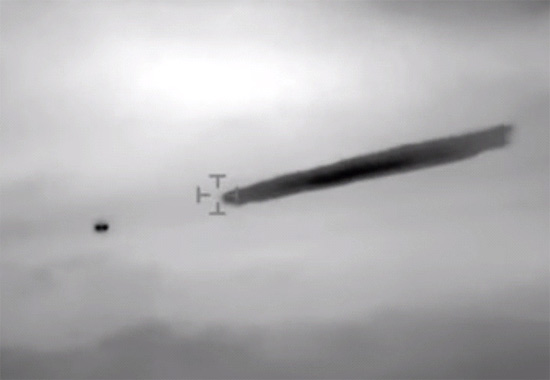 It’s one thing to argue with amateur photographers randomly claiming that Chinese paper lanterns let loose for New Year’s Eve are ET from outer space.
It’s another for the Chilean Navy and the Chilean equivalent of the Federal Aviation Administration (FAA) known as the CEFAA to release a nearly ten-minute video of what appears to be some kind of black project technology spraying chemicals into the air.

The CEFAA has been investigating the footage and Navy witness claims for two years now, and released the footage below in January 2017.
The video was captured on November 11, 2014, during a routine afternoon patrol mission. Witnesses still cannot explain what they saw.

The Navy Captain noted that the flying object was a “flat, elongated structure with two thermal spotlights like discharges that did not coincide with the axel of motion.” Meanwhile, the technician described it as “white with a semi-oval shape on the horizontal axis.”

One of the things that makes the Chilean footage of the UFO so compelling is that “in two instances it discharged some type of gas or liquid with a high thermal track or signal” the Navy technician had noticed. After filming for eight minutes, there was an ejection of a large plume of hot material that is seen in the video and found to be trailing directly behind the object. After the first ejection occurred, another soon followed.

Move along, nothing to see here? Come on. An airliner landing? Is that what this thing looks like to you?

Some people are just immediately accepting that explanation, regardless of the fact that CEFAA has said that there were no other aircraft on record in the area and Chile’s Navy noted that when they radioed it into several land-based military installations and local airports at the time, they were told the object was not appearing on any radar screens. It could only be seen on thermal imaging.

This wouldn’t be the first time authorities have picked up “unidentified aerial phenomena” with thermal imaging recently. Another UFO caught by a police helicopter’s thermal camera over the Bristol Channel back in September 2016.

Makes you wonder what would happen if thermal imaging technology became as ubiquitous with the public as cell phone cameras… how much strange stuff is going right over our heads on a daily basis and we have no idea because it isn’t in our visible spectrum?