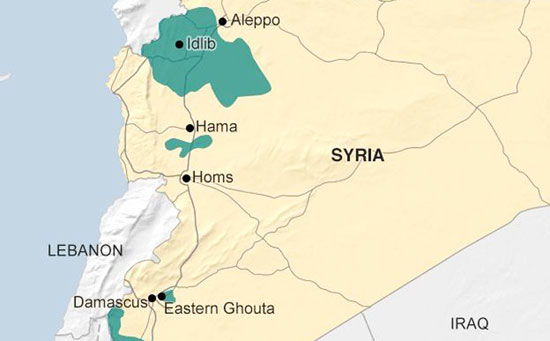 A number of British military men were held captive by the Syrian army in Eastern Ghouta of Damascus, media reports disclosed on April 11, saying that they had infiltrated the region for the previous month US plot to attack Damascus in collaboration with terrorists and NATO forces that failed.

The Arabic-language Al-Mayadeen news channel’s correspondent in Moscow reported that a number of British forces have been captured during the military operations in Eastern Ghouta.
Earlier reports had disclosed that foreign military forces were deployed in Eastern Ghouta of Damascus to launch a ground assault against Damascus in cooperation with the US.

The US and Israel planned to launch attacks on Damascus from several fronts in collaboration with the NATO and Jordan, but the plot failed after the Syrian army scored rapid, major victories in Eastern Ghouta.

Informed sources disclosed that the US and Israel intended to support the terrorists in Eastern Ghouta by airstrikes so that they could capture vast areas of Damascus to pave the ground for the Syrian government’s collapse.
“After the plot was disclosed, the Syrian-Russian military commanders started operations in Eastern Ghouta to repel it”, the sources said.

After the failure of the plot in March (2018), the US and Turkey sought to rescue the foreign militants trapped in Eastern Ghouta of Damascus and take them to Idlib as they were facing the Syrian army’s rapid advances in the region.
After the army’s expanding march in Eastern Ghouta and failure of the US-Israeli plot to conduct an effective offensive on Damascus, the US command center rushed to evacuate allied militants and agents operating for Israel, Jordan and NATO from the region.

Informed sources then said although the Turkish officials said they were ready to help evacuation of al-Nusra Front (Tahrir al-Sham Hay’at or the Levant Liberation Board) terrorists from Eastern Ghouta to take them to Idlib – this seemed to be a cover as they really meant to rescue their special foreign forces that were among the ranks of the Al-Qaeda-affiliated Al-Nusra in Syria.

“Therefore, the US has ordered Jeish al-Islam, Faylaq al-Rahman and other terrorist groups to allow evacuation of civilians from Eastern Ghouta to army-held regions in a bid to provide the ground for these foreign agents to also leave Ghouta in disguise and enable the Turkish intelligence service to send them to specified regions in al-Tanf and Northern Syria which are under the control of the US troops”, they said.

Yet, the US operations room in al-Tanf base ordered end of all operations by the aforementioned allied forces after the terrorists were defeated in Eastern Ghouta and the collapse of the two towns of al-Nashabiyeh and al-Mohammadiyeh on the first days of the Syrian army’s offensives in Eastern Ghouta.

Also the US CENTCOM urged withdrawal of allied forces from Eastern Ghouta to Arabayn, Zamalka and Douma before dividing Ghouta into three areas to pave the ground for their withdrawal from Ghouta region.
Militants allied to the US troops in Eastern Syria had revealed in March that the US planned to stage the attack in a different region further to the East between the provinces of Homs and Deir Ezzur.