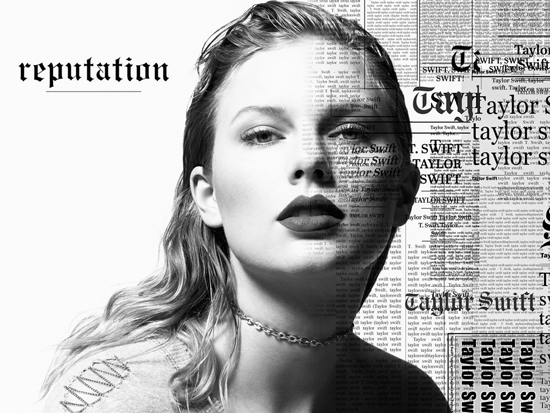 Taylor Swift is about to blow the whistle on Elite pedophiles

Pop star Taylor Swift is about to expose a dark Elite pedophile ring within the entertainment industry and the use of Satanic Illuminati symbolism used by celebrities under MK Ultra and Monarch mind control programs. The singer claims to have recently broken free from the shackles of her own reprogramming to have a conscious awakening. She recently told members of her inner circle that she plans on using her status and influence to “expose the truth”.

Her latest music video for her single Look What You Made Me Do is riddled with symbols that represent pedophilia, Satanism, Reptilians and the Illuminati. The lyrics to the song seem to be a direct response to the mind control programs used by the CIA and the Illuminati to subconsciously push agenda on the public.

Since its release researchers have been breaking down the hidden messages in Taylor Swift’s cryptic campaign, which included going dark on social media, and uploading mysterious clips of snakes. The corporate-owned mainstream media has been quick to blast any suggestion of her exposé as nothing more than a “wild conspiracy theory”, which is much easier to swallow for the sleeping masses, but the message, is so blatant, it’s difficult to ignore.

Let’s take a look at her messages that the mass media desperately doesn’t want you to hear. Taylor Swift hates mainstream news and the liberal media. By now, you may have already seen the artwork for Taylor Swift’s upcoming album (pictured above) that makes a clear reference to the Pizzagate/Pedogate Elite pedophile ring scandal.

That newsprint layover represents more than just the media at large, according to Twitter user @ReputationEra17: “The font in #Reputation album cover represents the font used by most of the Newspaper i.e. New York Times and of course there is a 10% shade.” Taylor Swift is specifically calling out the lying, liberal, mainstream fake news machine – the very one that covered up Pizzagate, the conspiracy exposed by WikiLeaks that revealed establishment Democrats ran child trafficking rings in Washington, D.C. 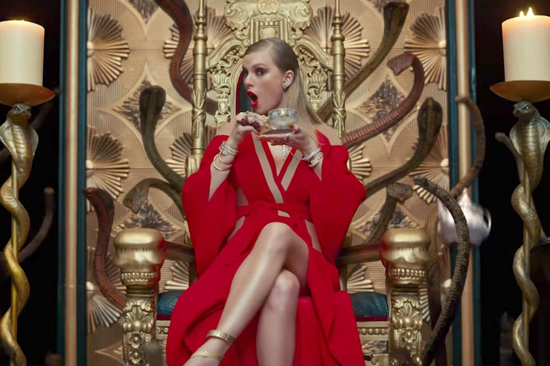 The spiraling triangles in the video mean globalists are losing control. According to 4chan, not only is Taylor Swift about to reveal the realities of Pizzagate, she’s also trying to show that the globalists are crumbling before our very eyes. At about the three-minute mark in the lyric video for Look What You Made Me Do, triangles appear to swirl. The same pedophile triangle symbol also quickly flashes up at the beginning, almost subliminally. Triangles are the universal symbol for pedophilia, employed by pedophiles Elites across DC and Hollywood to covertly advertise their human-trafficking rings. Or, as 4chan summarizes: “Pizzagate is unraveling, and spiraling out of the globalist’s control”. Also, right after this sequence, the whole screen flashes yellow for the first time. “Yellow is only used sparingly in this video, and only as a reference to goodness or righteously exercised power.”

The full-screen worldwide flash of yellow means the globalists are losing control of their mind control apparatus. “Their poison cloud is about to dissipate.” The imagery has a deeper meaning if you know what to listen for. It’s more than just the lyrics that have deeper meanings, though. After her feud with failed mind-control puppet Kanye West ensured that Swift would be forever linked to the snake emoji, Swift has clearly decided to reclaim that imagery. According to one researcher, Swift “appropriated the snake and turned it around on them, the ouroboros eating itself like the left does, spiraling around to look like the pedo symbol…” 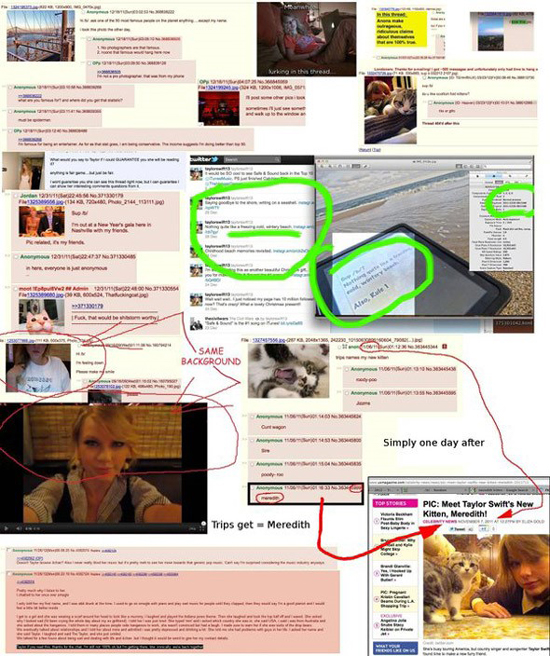 Swift’s desire to expose the Illuminati in the mainstream doesn’t seem to be a decision she has made lightly though, as she recently confessed to being a long-time 4chan power user, in which she was using the anonymous message boards to expose dark secrets. The users of 4chan have also compiled evidence that Taylor Swift posts among them, as shown in the image above. Rumors of her 4chan posting had already begun to swirl following Taylor Swift’s refusal to speak out during the presidential campaign. Since Taylor Swift refused to denounce Donald Trump, as many other celebrities had, 4chan assumed this meant that she simply didn’t want to hurt album sales by coming out as a Trump supporter.

Just listen to the lyrics. Lyrics paired with the images in the video, in particular, send a clear message: during the chorus, a bunch of ouroboros with the line “Look what you made me do” repeated. The left is constantly referred to as eating itself = snake eating its tail. Look what you made me do, therefore is a response to the increased radicalization of the left and the reactionary politics of T-Swift.

The left is constantly referred to as eating itself = snake eating its tail. Look what you made me do, therefore is a response to the increased radicalization of the left and the reactionary politics of T-Swift. Taylor Swift seems to be following a trend of celebrities that have recently come forward to blow the whistle on Elite pedophilia. Elijah Wood, Brad Pitt, Katy Perry, Corey Feldman, and Robert Downey Jr. are just a few of the big names that have attempted to lift the lid on the pedophile networks in the entertainment industry and political world. It seems as though there’s safety in numbers though, as more come forward to reveal the truth.