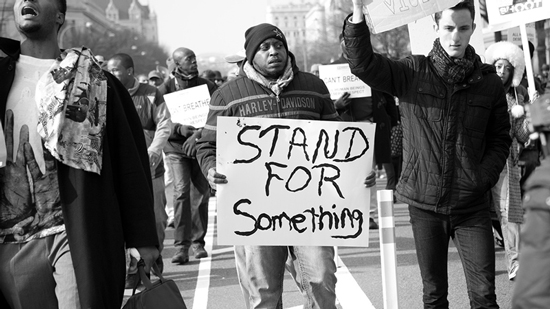 “Disobedience, in the eyes of anyone who has read history, is man’s original virtue. It is through disobedience and rebellion that progress has been made.” – Oscar Wilde

In a just world where righteousness was the norm, police officers would be peacekeepers upholding just laws, and legality would run its course parallel with morality; government would govern for the people; media would share information accurately and freely, without bias; and religious institutions would promote spiritual individuation. But the level of corruption is essentially relative to the level of comprehension of the population. Corruption cannot flourish in a transparent, well-informed society. The more aware a community is of the functions of their institutions, the more the community demands that legality runs parallel with morality, etc.

Essentially, corrupt institutions, to one extent or another, enslave individuals to those institutions. Institutions first become corrupted by individuals, and over time, these institutions are used to further corrupt the individuals in that society. Our institutions are designed to limit our access to knowledge and therefore, our thinking, and promote zealotry and elitism as the new political ideal – and as a result, many in our society are unable to comprehend the difference between legal and moral much less why the two have diverged.

There really is no need to conduct extensive research or to formulate a vast “conspiracy theory” as it concerns the matter of corrupt institutions enslaving individuals. It merely requires objective observation of our present reality and a slight understanding of the past. As the Ice T song of the same name says, “everything’s corrupt”. Whether the slavery is literal or mental imprisonment, or debt servitude, or spiritual co-option, or mass psychological manipulation, the result – terminology aside – is slavery.

“If you want a vision of the future, imagine a boot stamping on a human face – forever.” – George Orwell (O’Brien), 1984

Yes, institutions enslave individuals. Rather than point out legitimate observations by contemporary individuals unfettered by the said institutions, perhaps it is wise to take retrospect at exactly what great thinkers of the Western world have said.

John Dalberg-Acton (1834-1902) was a writer and politician, and his words are part of a foundational thought pattern wherever people consciously desire to reform our institutions to serve liberty and fairness: “Power tends to corrupt, and absolute power corrupts absolutely.”
Of course the entire statement is even more revealing than the well-known snippet.

“I cannot accept your canon that we are to judge Pope and King unlike other men, with a favorable presumption that they did no wrong. If there is any presumption it is the other way against holders of power, increasing as the power increases. Historic responsibility has to make up for the want of legal responsibility. Power tends to corrupt and absolute power corrupts absolutely. Great men are almost always bad men, even when they exercise influence and not authority: still more when you superadd the tendency or the certainty of corruption by authority. There is no worse heresy than that the office sanctifies the holder of it.” – Lord Acton 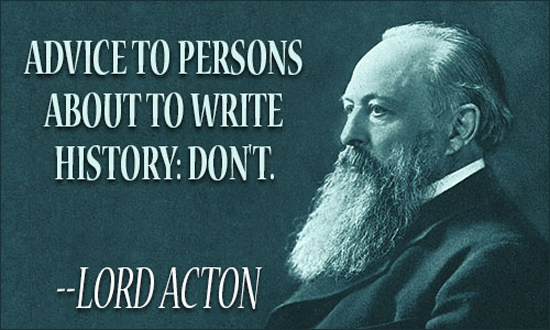 Finding truth in corruption is like finding clean water in an industrialized society. We know through evidence that governments and corporations will use everything up to and including science to lie, making it so that distinguishing truth among the presentation of statistics (etymology: state math), and scientific validation requires not only an understanding of mathematics and physics, but of politics and prejudice as well.

Take a new look with what the Buddhists refer to as the Beginner Mind. This technique approaches all things with the innocent questioning of a child. Another technique is employable is to pretend you are blind. If you could not see images but only could only contemplate the story, your perception of situations can change though simplification. This can be helpful in providing clarity enough to then use other legitimate forms of observation.

The world was deeply divided during Lord Acton’s life, divided by a gulf between the haves and have-nots. The simple observation Lord Acton made – that those haves in power are much more likely than the rest of us to be corrupt, for they have the power to be so – as well as the reasoning behind it is as true today as it was back then. And the gulf between the haves and have-nots is wider than ever. Now, beyond Lord Acton’s rule is an even more troubling observation, that most of the world is partaking in, or stuck in, a sick system of Master and Slave.

Georg Wilhelm Friedrich Hegel, the philosopher best known for conceptualizing the Hegelian Dialectic and the “Thesis, Antithesis, and Synthesis” model of thinking also formed “The Master and Slave” philosophy. In an extraordinary exploration of world history and the evolution of human consciousness, Hegel’s theory presents an extraordinary and compelling truth; the world is made up of masters and slaves and neither will ever become conscious unless this pattern is broken and remade. Moreover, the more conscious individuals are, the less likely they will enslave others, or accept enslavement. Indeed, observation with the Beginner Mind, or observing as though blind, certainly points to this dynamic.

The core presentation of the Hegelian Philosophy of The Master and Slave is that when one consciousness meets the other the stronger one will enslave the other. If the slave does not revolt this status quo will remain; and neither becomes conscious. If The Slave becomes conscious there is revolution. Only then is The Master conscious as well. Only when The Slave revolts are either The Slave or Master conscious. In summation, only in revolution is there a transformation of consciousness internally and externally. Only when someone stands up is either party compelled toward the realization of consciousness.

In today’s war world, the only revolution is change through peaceful means; through understanding. The philosophy of The Master and Slave is profound and worthy of further reading and research. But now to add to the idea, the world is never just black and white. The world may be primarily made up of the black-and-white condition of masters and slaves, but, as in all things, there are grey areas as well. Perhaps this is how people can so easily deny they are in either predicament.

Masters and Slaves – Worldlings and the Worldly

To understand this predicament, as with all comprehensive thinking, one must consider this situation using a matrix of four. Our divided world is made up not only of the Masters and the Slaves, but also of the Worldlings and the Worldly. The Worldlings support and eat off of the Master/Slave system, while the Worldly support the Slaves and seek to instigate revolt, in order to spark the development of consciousness of the Slaves and Masters both.

As much as possible, wherever it is, we must call out the Masters and the Worldlings for what they are; purveyors and benefactors of slavery. And at the same time we must make every attempt to inspire more Slaves to become Worldly and shake off the shackles – and their shacklers – from their backs. 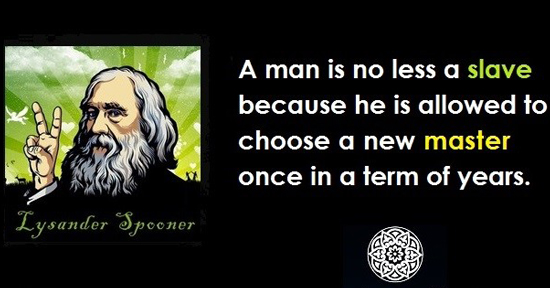 Perhaps one of the most crucial adjustments to make and inspire others to pursue is to actively distinguish individuals from institutions, and more subtly, constructs of individuation from those of institutionalization. In order to accomplish this important recognition, focused examination is required. One need not a complex theory or philosophy, just a recognition of the institutions and individuals around us.

Ask yourself: “Are the four types of institutions – government, religious, corporate and media – truly serving our society, or are they corrupting situations, or both?
Why do I accept it as normal that our nation’s leader’s lie? Those individuals are acting as if they are institutions, hiding behind the protection of institutional veils?

In a just world where righteousness was the norm, would corporations need to pirate the rights of individuals, of personhood? Would government take rights away from the people and grant them to corporations?

Would religious institutions, supposedly the bastions of charity, be among the world’s wealthiest?
Would the media fail to report on major world events while circulating others on endless repeat?”

Government corrupts culture, religion corrupts spirituality, corporations corrupt exchange, and media corrupts thinking and intuition around you…
While institutional encroachment on our society continues, perhaps the most important distinction we can maintain today is always to differentiate between individuals and institutions. The Worldly may spark the consciousness that ends the Master/Slave cycle of corruption.

How to Terraform A World – Conspiracy over Time